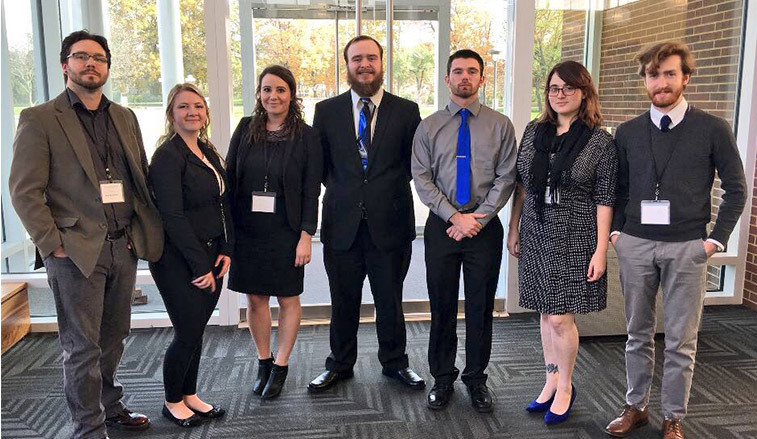 SLIPPERY ROCK, Pa. - In the digitized 21st century, conversations have quickly moved from being face-to-face to taking place on high-resolution screens either on a desktop or mobile device.

But from 9 a.m. to 12:30 p.m., April 14, Slippery Rock University students will make communication personal via the Fourth Annual Ethics Bowl. The event will take place in the Smith Student Center.

The event provides teams of 3-5 students with opportunities to confront and discuss ethically complex, real-world cases and develop thoughtful responses as they contend for justice.

With today's fleeting focus from topic to topic, Andrew Winters, SRU instructor of philosophy, believes that the Ethics Bowl is beneficial for students and their exposure to deep and diverse issues.

"This event is not to make ethics easy, by any means," said Winters, "but to illustrate how we don't give enough time to the issues that are important to us.

"(The Ethics Bowl] helps to explicitly develop critical thinking skills as they relate to moral dilemmas and move beyond mere content. Students become more informed about how to speak of these things in a sensitive way and how to appropriately respond in certain situations."

An outgrowth of the Intercollegiate Ethics Bowl developed in 1993 at the Illinois Institute of Technology, SRU's competition is posed in a quiz bowl style. A panel of judges will select four of five predetermined case studies, ranging from politics to mental health or environmental issues, and present questions to two teams at a time.

Teams will be offered response and rebuttal periods, which will be scored for consensual presentations, consistent positions and case-by-case relevancy.

While the bowl is structured similarly to a debate, the competition's ultimate goal is to unify over common objectives rather than divide over controversies though a conversation-styled event.

Winters said that the Ethics Bowl is not about right or wrong, but rather a series of constructed responses that are used to progress the conversation forward and come to an ethical understanding of the issues at hand, whatever the team member's personal view may be.

Judges will be most interested in who makes the most meaningful contribution to the conversation and demonstrates the most effective civil discourse skills.

Winters said that the Ethics Bowl is not just a "spur of the moment" conversation but a humble endeavor to better understand our world. Participants spend hours each week developing their ideas and creating a unified team voice by versing themselves in a vast dialogue of ethical issues.

"Intuition is just the starting point. You have to continue to do research and develop your ideas," said Winters. "Decisions are always made in context of a community, so consistency across teams is important."

To facilitate this continuous discussion, Winters will hold optional practice sessions every Thursday evening until the event.

"There is an intrinsic value in allowing students to become better critical thinkers and discuss things in a civil way," said Winters.