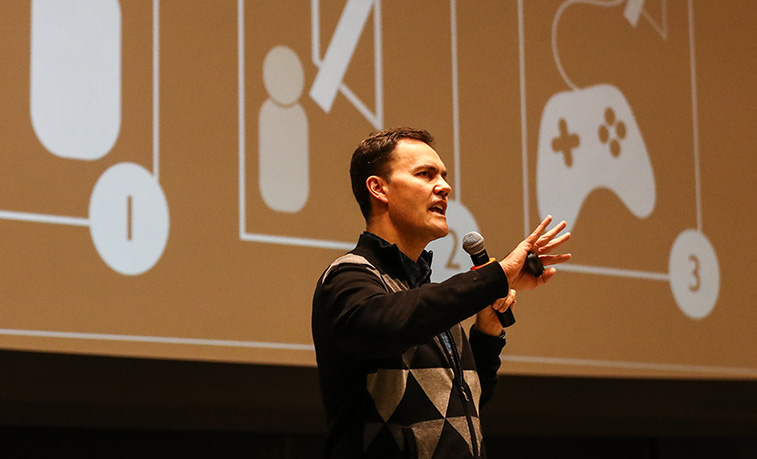 Jesse Schell, the founder and CEO of Schell Games, spoke to a class of Slippery Rock University education students, March 1, about some of the latest video gaming technologies available for teachers to engage young learners.

SLIPPERY ROCK, Pa. - Technology is rapidly changing the way teachers engage their students in the classroom, so before Slippery Rock University education students enter their field experience as student-teachers, they are oriented to existing practices and new technology they could encounter.

Case in point: SRU juniors and seniors enrolled in an early childhood/special education seminar class caught a glimpse of the future, March 1, when Jesse Schell, the founder and CEO of Schell Games, spoke with them about how video games are impacting learning in the classroom and provided some advice for integrating this technology when they become teachers.

"Making a commitment to teaching young children is one of the things that is so important to our society," said Schell, whose Pittsburgh-based company is the largest full-service education and entertainment game development company in the United States. "It's exciting to be able to talk to people who believe, 'Yes, this is what I want to do and take on this difficult, challenging job.' If you are thinking about using digital (gaming technology) in the classroom, the best way to do it is not to use it as a content delivery mechanism but as a creativity tool." 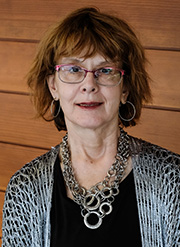 During Schell's 45-minute presentation in the Smith Student Center Theater, which was arranged by SRU's Office of Career Education and Development, he demonstrated some of the creative ways companies like his are producing games to help children learn. Some examples Schell shared were "Daniel Tiger's Neighborhood," an online game his company developed for Fred Rogers Productions as a companion to the Public Broadcasting Service's animated television series; and a virtual-reality lab practice game show called "HoloLAB Champions," created through support from the U.S. Department of Education's Institute of Education Sciences that allows students to interact and compete safely in a lab environment without tangible lab equipment.

"We are looking at incorporating more technology into our classrooms and some of the apps and games that he showed us are geared toward children that can make learning more fun and interesting, which is a major goal that we have in education," said Rose Heilman-Houser, SRU associate professor of education and early childhood. "We need to get students involved and interested. Two-year-old children can now operate (a smartphone), so this is something that they are very savvy about and we are directing the technology to what they know, and that interest enhances learning. (Schell's presentation was) good for our students to be informed about the opportunities that are available."

"We really enjoyed it and thought it provided a different perspective on teaching," said Jenna Achtzehn, a senior early childhood/special education major from Irwin, who is the secretary of the Student-Pennsylvania State Education Association student organization at SRU. "I liked it because the message is not to take your textbooks out of the classroom and go completely digital, but to use a combination of both."

One example that seemed to resonate with the Heilman-Houser and the students was "HistoryMaker VR," a virtual reality puppeting tool for classrooms, where students, after conducting research about a historical figure like Benjamin Franklin, can record themselves in a virtual environment making a speech as that person, reading from a teleprompter and interacting with props and artifacts specific to the historical figure's time period. Noting that the blend of physical and digital is something that engages young learners, Schell also demonstrated "Happy Atoms," a tangible, interactive learning tool that combines a digital app with a physical atomic modeling set to teach students fundamental lessons in chemistry. 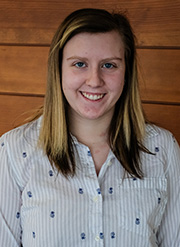 "The teaching field is changing a lot and we need to bring new technologies into the classroom because kids are already introduced to it at such as young age," Achtzehn said. "Having this in the classroom will get them more intrigued and enjoy learning more. The challenge is learning the technology because there are so many new things out there."

Schell's advice seemed to calm any anxiety the SRU students may have about advancing technologies. He recommended a common-sense approach to using high-tech gaming in the classroom and to not waste students' time on things that teachers themselves don't know how to work or if the technology will work with their students.

"The most important thing is getting in there and trying it yourself," said Schell, who started Schell Games in 2002. The company now has more than 100 employees, working on projects for mobile, desktop, virtual reality and even interactive installations for theme parks. "The great thing now is that everybody's growing up learning software and all of you have a supercomputer (a smartphone) with you all the time that has dozens of different complex applications. The key is taking what you know and finding apps and trying them out in safe contexts where you can see if this really works and if it fits in your lesson plan. It's less about knowing the technology and more about understanding what the kid's brains are going to do when you introduce that technology."

As an example, Schell said, is when teachers introduce education games like Minecraft, they must anticipate students going into a "tunnel of excitement" for the first 15 minutes before they are ready to understand the lesson.

In addition to running his company, Schell is the author of "The Art of Game Design: A Book of Lenses" and is a professor at Carnegie Mellon University's Entertainment Technology Center. Prior to starting Schell Games, he was the creative director of the Disney Imagineering Virtual Reality Studio and his most celebrated design was Disney's "Toontown Online," the first 3D massively multiplayer role-playing game for kids.

Schell prefers the term "transformational games" when he discusses his company's products, because the games are not merely to entertain players but to change them.

"(The games) can be curricular-based, like learning fractions, or creating a social-emotional change, like sharing or dealing with anger," Schell said. "We are leading people through activities because people have to participate in activities in order to change."