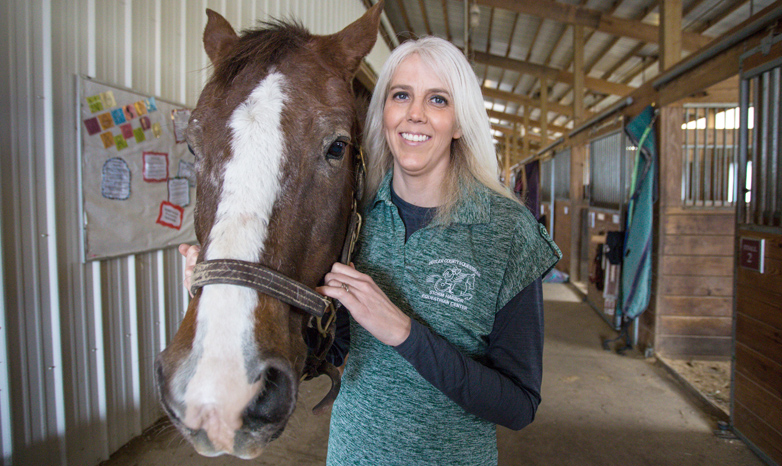 Courtney Gramlich, manager of Storm Harbor Equestrian Center, will be presented with the President's Award for Outstanding Service March 28. She will share this year's honor with Brian Danielson, director of the Center for Excellence in Teaching and Educational Technology.

SLIPPERY ROCK, Pa. - Brian Danielson, director of the Center for Excellence in Teaching and Educational Technology, and Courtney Gramlich, manager of Storm Harbor Equestrian Center, will be presented with the President's Award for Outstanding Service; and Alan Levy, professor of history, with the President's Award for Scholarly and Creative Achievement at 12:30 p.m., March 28 in the Smith Student Center Ballroom as part of Slippery Rock University's "Celebration of Excellence" month activities.

Danielson, who arrived at SRU in 2006, provides traditional and distance education faculty members with support and services in the areas of instructional design, delivery and instructional technology.

A native of Grove City, he earned a bachelor's degree in secondary education/English and communication from Grove City College in 1998. After graduating, he relocated to Boston, Massachusetts to work at John Hancock Financial in the company's learning and development division. 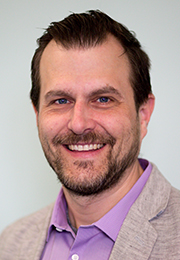 "It was there that I first experienced the positive impact that technology can have on the teaching and learning process," Danielson said. "SRU's commitment to providing high-quality instruction and its emphasis on the role that technology plays in that process is a winning combination for me. That dynamic allows me to pursue both my professional interests to the benefit of our students; the opportunity to collaborate with some very talented and hard-working people; and to establish real, lasting relationships."

According to one nomination letter, "Brian is the reason I am a successful online instructor. When I first thought about teaching an online class in the English Department, I was intimidated. I suspected that online teaching wasn't simply filming a face-to-face lecture and having the students hit 'play,' but I had no real vocabulary or theory with which to approach this new idea. The one thing I did know for certain was that online classes could greatly benefit our students.

"In stepped Brian (with) great patience, a sense of humor and a whiteboard to run a series of training classes for anyone interested in teaching online. And like only the best classes, his were clear, relevant and fun. I remember one class in the middle of the semester where Brian had a room full of tired English professors and I thought, 'He's going to have a long, long day.' (It is always interesting to be a student again and see how other very good teachers do their job). Like all good teachers though, Brian was prepared. He put us in small groups, tacked a dollar bill on the corkboard, and challenged us with, 'Whoever gets to the answer correctly and first, gets the money,' while walking us through some difficult handouts about online instruction. It was controlled madness, silly and yet it very effective. It was amazing to see how hard we all worked to get that dollar.

"By the end of these sessions, we all knew the theory behind inline teaching, had each developed course shells for teaching our classes, and most importantly, had the confidence to digitize our classrooms. The amazing thing about Brian though, is that he didn't stop there. He is still an invaluable resource for any of us. The moment we have a question about teaching or technology related to the online classroom, Brian is immediately helpful. He not only offers answers, but asks us to think about other ways to accomplish the same tasks. He challenges us to make a better and better classroom for our students."

Gramlich, a Butler native who grew up in West Sunbury, is a 2000 SRU graduate with a bachelor's degree in therapeutic recreation. She began her professional career with the therapeutic riding program at Grove City's George Junior Republic, a 500-acre residential campus for court adjudicated delinquent and dependent youth, before returning to her alma mater in 2006.

"Being an alumna of SRU and having so enjoyed my educational experience here has given me a vested interest in working here," Gramlich said. "I enjoy working with the college students and keeping track of what path they end up following. I am very lucky to be working in such a unique program and working amongst many talented individuals."

In support of Gramlich, one nomination letter said: "For the previous decade, I have witnessed her dedication to her work at Storm Harbor. Not only does she devote her time to organizing numerous equine-assisted activities, but serves as an adviser to the equestrian team at SRU, volunteers her limited time to the 4H Club and works with colleagues to receive grants for programming at Storm Harbor.

"She goes above and beyond her standard job requirements. Her success in her work was extremely apparent this year, as Storm Harbor reached the $1 million endowment mark at the conclusion of the 2016 Sunset Serenade fundraiser.

"Her achievements would be a hallmark for most people, but Courtney continues to epitomize what it means to give back."

Said another nominator: "I have seen, first hand, the outstanding job Courtney has done. In every facet of her position - from grant writing, to planning, to researching, to working with students, community members, alumni and donors - she has led Storm Harbor Equestrian Center to become the well-respected unit it is.

"I have had the opportunity to work with many dedicated and talented people ... but I have met few who have contributed as much to SRU as Courtney has. She is a visionary who works tirelessly to reach her goals. She is a leader who inspires others and is someone who has represented SRU well through her contributions to its students, to the academic community and to the University as a whole."

The President's Award for Outstanding Service was established in 1981 through the generosity of the late Robert and Donna McMullen, long-standing patrons of SRU who contributed consistently during their lives to support the University's advancement. Robert McMullen was a member of the Class of 1951 and chaired the SRU Foundation Inc. board of directors. The award continues through the generosity of their son, Doug, and his wife, Linda. 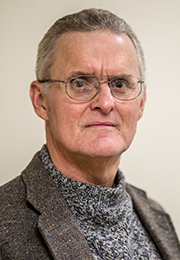 Levy is receiving the President's Award for Scholarly and Creative Achievement for his book, "The Political Life of Bella Abzug." The work is a two-volume biography on the former three-term Congresswoman and long-time activist.

Abzug (1920-1998), who was nicknamed "Battling Bella," was a lawyer and leader in the Women's Movement. In 1971, she joined other leading feminists including Gloria Steinem, Shirley Chisholm and Betty Friedan to found the National Women's Political Caucus. Abzug once declared, "This woman's place is in the House -- the House of Representatives!" She was later appointed to plan the 1977 National Women's Conference by former President Gerald Ford; and led former President Jimmy Carter's Commission on Women.

"My work is the first full biography of Abzug and most scholars agree that such a work has been long overdue," said Levy. "In preparation for this work, I read all the relevant published works, contemporaneous newspapers and journals; and delved into her personal papers, of which there are over 1,000 boxes, housed in the main library at Columbia University."

Reviewer Mary Frederickson of Georgia's Emory University, said of Levy's book" "The first page of Levy's work sets the tone for this engaging analysis of Abzug as a moving force in American politics in the 1970s and 1980s. As Levy tells readers, some described Abzug as a 'proverbial bulldozer;' others simply referred to her as 'a New Yorker.' Men feared her and she 'scared the s---' out of women.'

"Well researched and carefully written, Levy's (book) is a perfect text for students in history, political science, women's studies, gender studies and American studies. Graduate students will find rich sources to mine and ideas to confirm and challenge. Finally, the lively readability of Levy's text makes it a book that general readers will enjoy."