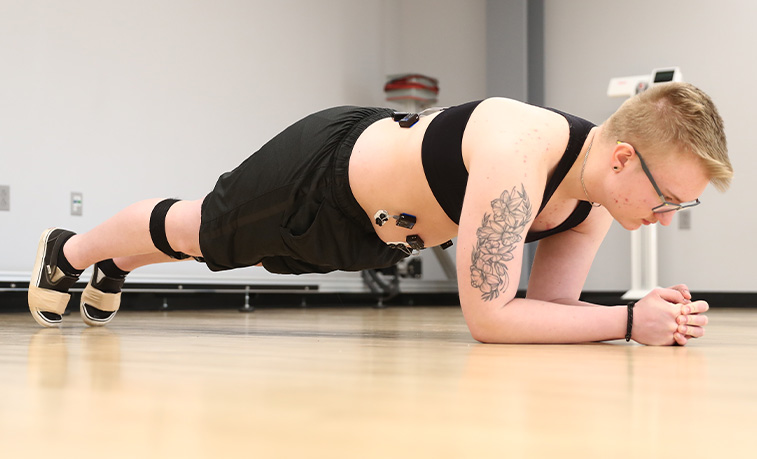 Slippery Rock University exercise science major Kian Hastings performs a plank hold in the exercise science lab as part of a faculty-student research project comparing the plank to other types of exercise that activate core muscles.

SLIPPERY ROCK, Pa. — Studying the plank is a much better fate than walking the plank, as exercise science students at Slippery Rock University can attest.

The plank hold is a popular strength exercise comparable to the pushup or situp for its simplicity and use of a person's body weight. Planks are done in a pushup position but instead of moving up and down, a person holds their body for a duration of time while keeping their forearms on the ground. It's something that a faculty-student research team at SRU is studying by comparing the plank to other types of exercises that engage the core muscles. 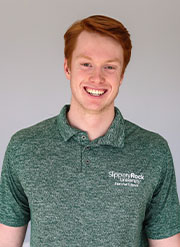 "Planks are popular because they hurt; they are super tough," Sam Ellestad, a senior exercise science major from Damascus, Maryland. "There's a lot of muscle activation in the abdomen and the external obliques."

Researchers from SRU's Exercise and Rehabilitative Sciences Department are comparing muscle activation of the plank to four types of exercises: the farmer's hold, which is holding two equally weighted resistances in each hand; the farmer's carry, which is the same as the hold but walking a designated distance; and the suitcase hold and the suitcase carry, which are the same as the farmer's hold and carry but holding the resistance in one hand instead of two.

"The farmer's and suitcase holds and carries are typically viewed as being more functional compared to the plank," Ellestad said. "I thought of them being more for grip or your shoulders, but when you dive into the literature, they're actually incredibly effective at impacting the core musculature."

"But there's not as much research that's been done comparing the plank to the carry and the hold; that combination just hasn't really been looked at yet," said Jeremy Dicus, associate professor of exercise and rehabilitative sciences, who is the principal investigator on the study.

Ellestad, who is a research intern and co-investigator of the study, is collecting data from more than 20 participants in the study who are SRU exercise science majors. Participants come to the exercise science lab in Patterson Hall and, after going through a series of tests to measure muscle tissue and fat mass, perform the holds and carries for 30 seconds using dumbbells or kettlebells. The resistance for the suitcase and farmer's holds and carries is determined by a percentage of a person's body weight after they are weighed while standing and planking on a scale.

While they are performing the holds and carries, the participants have several sensors placed on their bodies to collect muscle activation data. The researchers are focusing on core muscles that include rectus abdominis and the external obliques, around the stomach, and multifidus and longissimus, along the back and spine. 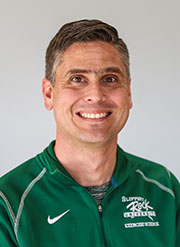 The study is the first research project in SRU's exercise science lab using the Noraxon biomechanical sensor technology. The Noraxon portable lab is a unit and software that monitors the movements of the human body and gathers data for research and enhance diagnosis and prescription for clinical practice.

"This is an inaugural study that we hope will be a building block and keep growing as more students get interested," Dicus said. "Sam's doing a great job mentoring his peers, working with the system, collecting the data and really running the research project under our guidance. This is an amazing experience for undergraduate students. That's one of the things that sets our University apart from other larger research-focused schools: undergrads get to be much more involved in the research process from start to end, as opposed to just being a subject or assisting with data collection."

"This is a really rare opportunity to do undergraduate research and get published (in a science journal) that I don't think I could have gotten anywhere else," said Ellestad, who plans to attend graduate school for physical therapy and someday work as a therapist with military and first responder personnel. "Also, the opportunity to work with the Noraxon system is rare because not a lot of schools have that system or would let undergraduate students work with it. This experience has made me an incredibly competitive applicant for graduate school, and I've been lucky to be a part of it."

The SRU researchers plan to submit their findings to academic journals after the study is completed.

More information about SRU's exercise science program is available on the department's webpage.