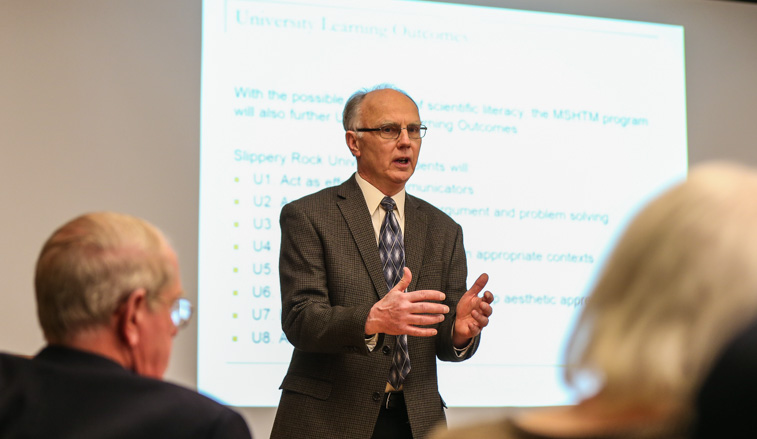 SLIPPERY ROCK, Pa. - Slippery Rock University's council of trustees voted today to advance a Master of Science in Hospitality and Tourism program to Pennsylvania's State System of Higher Education board of governors for approval.

The proposed program requires 30 credits to complete and would be delivered completely online.

Courses would be taught in a 15-week format, so students would take two concurrent courses in fall and spring semesters, and one class in summer sessions. The program is designed to be completed in 24 months.

The proposed program would be the first master's degree in the discipline in the State System. According to organizers, it is being proposed in response to the "dynamic and increasingly complex environment in which hospitality and tourism businesses must operate, anticipated industry growth, and related need for committed, well-educated management."

"The complexities of this field are exacerbated by increases in natural disasters, safety incidents such as the 2017 mass shooting at the 4-Diamond Mandalay Bay Resort and Casino in Las Vegas, and implications for changing hospitality models," said James Dombrosky, SRU assistant professor for hospitality, event management and tourism. "Well-trained managers with strong skills in critical thinking, analytical and decision-making skills will be vital to meeting these challenges."

The Washington Post reported in 2012 that "business majors -- especially in finance, hospitality management and international fields -- are in demand again after taking a hit early in the recession, and stand to increase already high salaries by an average 40 percent with a master's." A 2014 Forbes Magazine article reported "given the knowledge orientation and complex, global nature of today's economy, employers are very often demanding the master's degree for many of their fastest growing professional and leadership roles."

SRU's proposed program would serve to help meet that demand in the complex and intrinsically global hospitality and tourism industry, while at the same time enabling personal growth, Dombrosky said.

-Pennsylvania ranks ninth in the U.S. in tourism industry employment (U.S Travel Association, 2015).
-Restaurants, management of companies and lodging accommodations rank 1st, 6th and 26th respectively among the state's industries (Pennsylvania Department of Labor and Industry).
-Travel and tourism related economic activity supported more than 489,000 Pennsylvania jobs with a growth rate nearly twice that of all non-farm jobs in the state and generated $4.4 billion in state and local taxes and $4.5 billion in federal taxes in 2015 (Tourism Economics, 2016).

A March 2017 Pittsburgh Business Times article noted the Pittsburgh region has experienced a "hotel building boom" in new hotel rooms over the last several years, with a 25 percent increase in hotel rooms since the beginning of 2015, and a seven percent increase in room inventory in the past year alone, with at least four hotels under construction, two others in development and three hotels currently being built in nearby Oakland.

Matthew Sterne, general manager of Fairmont Pittsburgh and board member for the Pennsylvania Restaurant and Lodging Association and Greater Pittsburgh Hotel Association, recently said that "in Pittsburgh and western Pennsylvania, we are fortunate to be experiencing a hospitality renaissance" and "our biggest challenge to support this growth continues to be the need for talent, and this requires the combination of education and experience."

"SRU's proposed program would enable State System graduates, as well as graduates from outside the System, to further their education," Dombrosky said. "The expectation is that most students will start the program after they have obtained some post-graduate industry experience."