Aaron Cowan, Slippery Rock University associate professor of history, will be presented with the President's Award for Scholarly and Creative Achievement for his book, "A Nice Place to Visit: Tourism and Urban Revitalization in the Postwar Rustbelt," April 10. 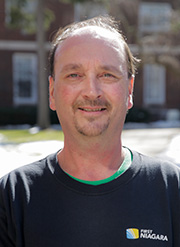 A native of southwest Virginia, Cowan has been at SRU since 2008. His research and teaching interests include urban, environmental and public history. He is the author of "A Nice Place to Visit: Tourism and Urban Revitalization in the Postwar Rustbelt," that was published in 2016. The book examines the rise of tourism as a revitalization strategy in struggling "rustbelt" cities - such as Pittsburgh, Baltimore, Cincinnati and St. Louis - and the effects of that development on cities' political, economic and social dynamics.

The American Historical Review in citing Cowan's work wrote: "Cowan, in clear prose, details the transformation of American cities into tourism-oriented meccas. Through exhaustive research in periodicals, business journals, municipal records and manuscript collections, he recounts the actions of political and business leaders as well as the reaction of poor blacks, those most often affected by urban renewal schemes. He thereby illustrates the postwar redesign of the urban landscape. He also notes the unintended outcomes of tourism development, as when Harborplace became Baltimore's hip-hop epicenter during the 1980s. Cowan's analysis is balanced, exposing the positives and negatives of the "good community" sought by tourism boosters (158). This book is more than a tale of four cities; it is a compelling story of modern America." "I am gratified to see that the book has received such wide distribution," said Cowan. "It has a home at more than 200 libraries in 12 different countries and a number of professors have assigned it for courses in urban history. It's very humbling and I'm glad it is resonating with so many people."

Cowan, who is also the founder and co-coordinator of SRU's Stone House Center for Public Humanities, earned a bachelor's degree in history from King College; a master's degree in U.S. history from the University of Cincinnati; and a doctoral degree from UC.

A resident of Slippery Rock Borough, Cowan, when not teaching, enjoys reading fiction, playing tennis and cheering for the Cincinnati Reds.

Pincek has enjoyed a four-decades long tenure at SRU and as the food service liaison with AVI Fresh, the University's contract food vendor, has worked diligently to transform the dining experience on campus to the benefit of generations of students.

In support of Pincek, one nomination letter said: "Under her leadership the food service operations have been transformed and, in turn, have transformed the campus. Over the last 12 years, every food service facility has been renovated and improved. She steered major renovation projects in Boozel and Weisenfluh dining halls and the addition of national brands to campus with Starbucks and Quaker Steak and Lube."

"(Her work) has changed the food service dynamics on the campus," said Christopher Cole, director the Smith Student Center. "(She has established) a showplace for quality food preparation and a social hub for the campus. For example, The Restaurants at Weisenfluh bring a different concept to the campus with an emphasis on fresh ingredients and made-to-order dishes in an upscale food court design. All of these changes are in response to the changing needs and desires of SRU students and have created desirable venues for camps, conferences, meetings and events."

Beverly Lumley, information technology generalist in Student Services, points to Pincek's self-motivation, drive and sense of purpose as characteristics she has come to admire. "Her moral integrity is the glue for the fantastic camaraderie that she keeps not only within her division and staff that she oversees, but campus-wide. She is highly respected as a result of her honesty and character as well as her vast knowledge base.

"For as long as I have worked for her, she has continually encouraged, mentored and assisted in advancing me into higher positions. I have become the employee I am today because of her. Because she leads by example, she is able to drive change in staff members which has had a lasting impact on my career as well as many others who report to her."

Ringler, who joined SRU in 2011, arguably has the greenest thumb in Slippery Rock. As the person charged with adding those "pops of color" across the campus, Ringler serves as the ring leader for the University's flower planting initiatives.

A Slippery Rock native, Ringler worked in construction and real estate sales before coming to the University and taking the reins of transforming the visual appeal of the campus in 2015.

That appeal includes the maintenance of dozens of self-watering flowerpots filled with annuals in front of buildings, potted banana palms that accent the walkways, and looking after a variety of royal purple smoke bushes, knock out roses and sweet gum trees, among other species.

The upkeep of the University's creative landscaping is vital to SRU's appearance, which is a critical first-impression barometer for prospective students and families.

Under Ringler's tutelage, SRU grounds staff, with help from student laborers, not only tend to the planting of flowers and plants, but replace mulch, weed, trim and plant, plant, plant.

In June 2016, Ringler joined with Erin Strain, director of SRU leadership development at the Leadership Development Center in reimagining the front yard of the LDC as a haven for a variety of indigenous plant life, butterflies and hummingbirds.

The duo's initiative, formally known as the "Butterfly and Hummingbird Garden," came about as a peaceful result to some alarming conclusions. As the pair observed and researched plant and wildlife near the facility, they were alarmed to learn that 5 percent of the state's plant species had been eradicated with another 25 percent in danger of extinction. The development of the garden was a humble attempt to assume some environmental responsibility and to do their fair share in reversing the damage they found so distressing.

"Our goals for (the garden) were fourfold," said Ringler. "We wanted to see (the garden) become an educational asset to the University's biology and science classes, increase the marketability of the campus, create more beauty for everyone to enjoy and of course, protect as many native species as possible."

"Brian is one of the most positive people you'll encounter at SRU," said Rita Abent, executive director for communication and public affairs. "He always has a smile on his face and is willing to help however he can. I've seen him conducting unscheduled 'mini-classes' as people stop by to chat about something he might be planting, or to ask a question about a plant they saw in one of the campus gardens. There's no doubt he played a significant role in 'botoxing' the campus."