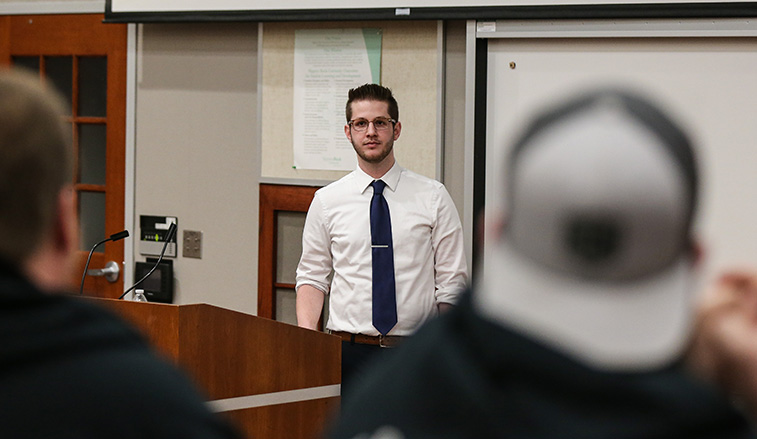 Students enrolled in their senior Public Relations and Integrated Marketing Communication Capstone courses discovered that working on a big campaign for their first client isn't something that needs to wait until after graduation. Instead, they got to pitch their ideas to local businesses and organizations during presentations required as part of their course work.

"I run the class like an agency," said Allison Peiritsch, assistant professor of communication, who for the last five semesters has paired clients with groups of four to five students in each class. "The course is meant to give students an opportunity to synthesize everything that they learned in their undergraduate coursework and put it to work for an actual client."

With two sections of the class participating this semester, 67 students are working on campaign proposals for 13 clients, including a dog groomer, an auto repair service and a coalition of libraries. Students' roles in the projects can include project coordinator, researcher/analyst, designer, writer or presenter. 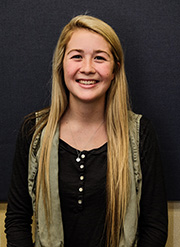 When Alanna Elliott, a senior communication major from New Wilmington, was told she would be the project coordinator for Reclamation Brewing Company in Butler, the assignment at first seemed daunting. The co-owner of RBS is Ben Smith, the mayor of the city of Butler.

"I feel like we have a little bit more pressure on us with his position of authority and influence in the community, but he's very calm and down-to-earth, so that makes us feel comfortable working with him," said Elliott "He understands what we're talking about, so it's nice to work with someone who gets what we're doing; he just doesn't have the time to do it himself."

SRU senior communication students Elliott; Doug Sirkoch, from Rochester; Ally Culhane, from Medford, New York; Piers Giles, from Sparta, New Jersey; and Sammy Hovis, from Meadville; developed a campaign proposal for RBC that included communication tactics such as the use of advertising, social media, brochures and posters to help Reclamation increase sales by 20 percent from June to August.

"It's great having an outside perspective, because you get so wrapped up in your business and you don't have the time to assess what everyone is thinking (through focus groups and consumer surveys that the students led)," said Smith, who opened RBC in 2015 and last week opened the nearby RB Cigar Bar and Speakeasy. "The students helped us focus on the things we already do well and then identify the things that we can do better. It's nice to have a fresh set of eyes to devote to this part of the business."

Smith approved the group's proposal and Sirkoch presented a pitch to a group representing RBC, March 22 at SRU's Eisenberg Auditorium, which included co-owner John Smith. The SRU students shared their research collected from surveys and other sources, made recommendations and outlined how they plan to influence awareness (brand recognition), behaviors (sales or foot traffic) and attitudes (favorable responses) from customers.

"The students are great; our group is awesome," Smith added. "They are very prompt and constantly on the ball, very organized and it seems like they have a lot of potential."

"I feel confident in what we've learned because everybody at our presentations were so happy," said Elliott, speaking on behalf of her group as well as her classmates who are pitching to other clients. "A lot of the clients are like, 'Wow, I want to hire you.' Even though they might not have money to pay you, it feels nice to know that what we've learned is valuable to someone else. I feel ready to go into the real world and do this for more clients."

According to Peiritsch, the students' interactions with clients have led to a number of them getting hired after graduation, whether by experience listed on their resume, a letter of recommendation from the client or even contracted services or an internship with the capstone client. For example, Emma Grubbs, a 2016 SRU graduate with a degree in communication, interned at Family Bowlaway in Butler, which was a former client for the capstone courses.

Peiritsch said some clients haven't had experience working with an agency, so students are able to educate them about communication and marketing strategies and tactics. After the campaign proposals are approved, students begin to implement the plans and create the materials. After the semester ends, clients are solely responsible for executing and maintaining the campaigns.

"It's a great experience," said Peiritsch, who formerly worked for a Pittsburgh-based public relations agency for 13 years. "I know it's painful for students because it's often the first time they've done this, working with real clients with very strong ideas about their businesses, but the feedback I get is this as valuable or more valuable than an internship. They get to do something for an organization where they can make a real impact."