"I look forward to continuing the conversations we started in the fall. I was impressed with the commitment of each of our institutions to their particular mission, and their universal goal of improving the lives and capabilities of individuals so that they could go forward and contribute in some way to the betterment of their communities," Greenstein said.

Greenstein will host an open forum from 10-11:30 a.m., in the Smith Student Center Theatre. All students, staff and faculty are invited to attend. 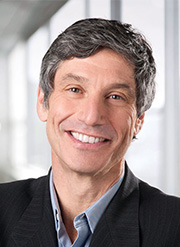 Before joining the foundation, Greenstein was vice provost for academic planning and programs for the University of California system. In that role, he oversaw system-wide academic planning and programs, including the University of California Press; the California Digital Library; the UC system's Education Abroad Program; internship programs in Washington, D.C., and Sacramento; and UC Online Education.

Greenstein has created and led several internet-based academic information services in the U.S. and the United Kingdom; and served on boards and acted in strategic consulting roles for educational, cultural heritage and information organizations. He began his academic career as a senior lecturer in Modern History at Glasgow University in Scotland.