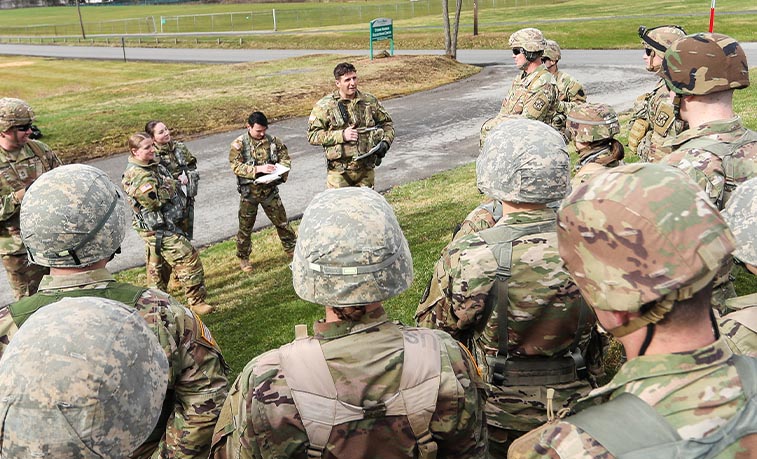 SLIPPERY ROCK, Pa. — On a typical Thursday morning, Asher Myers would be sitting in his Principles of Industrial Hygiene class at Slippery Rock University. But on March 24, Myers and 20 other junior cadets from SRU's Army ROTC unit found themselves in a very different type of classroom: strapped inside a UH-60 Black Hawk helicopter, 2,500 feet above campus. .

Four Black Hawks departed SRU's campus from the intramural practice fields along Harmony Road, carrying cadets to their Combined Field Training Exercise, or CFTX, at Camp Garfield Joint Military Training Center in Ravenna, Ohio, where they met up with other ROTC units from the region. But the Frontier Battalion, which consists of cadets from SRU and Clarion University, was the only unit to make an entrance on Black Hawks, which are four-blade, twin-engine, medium-lift utility helicopters that can transport 11 fully equipped combat soldiers in an assault-ready configuration.

"I've been on three flights and I'm sure that after 100 or so flights you get used to it, but every time for us it's exciting and you might get a little sick," said Myers, a junior safety management major from Fredonia. "It's pretty cool not being in class for a day and we got to fly over my hometown, and I got to see my friends' houses."

"This is great to have the opportunity to do some of the actual things they do in the real Army, and not just in ROTC," said Adam Jones, a junior homeland security major from West Clarksville, New York. "The sights were beautiful, and it was really a good time. I got a little nauseous and I didn't eat much this morning, but it was it was really a great time and I enjoyed it."

This was the second time that cadets from SRU flew in Black Hawks this academic year. In the fall they participated in an air movement as part of a lab exercise where Pennsylvania National Guard pilots took them on a 30-minute, low-altitude flight to show cadets the maneuverability and speed capabilities of a Black Hawk. The March 24 air movement, however, was more for "esprit de corps," as they say in the military.

"The primary purpose is troop movement and having fun, seeing the sights and being ready to execute the mission when we land," said Nathan Morgan, a senior safety management major from New Columbia, who was one of a few senior cadets who joined the flight to train the juniors at CFTX.

Morgan originally joined the National Guard and wanted to be a mechanic, but after attending Air Assault School in 2017 and flying in a Black Hawk, he decided he wanted to become a full-time pilot. After graduating in May and commissioning as an Army officer, Morgan will attend Aviation Flight School in Fort Rucker, Alabama.

"For some people, being on a helicopter is very euphoric," Morgan said. "You climb in and the propellers and rotors are moving at high speed, so it's loud and the air's blowing in your face, and then you get strapped in and the pilot gives everyone a thumbs-up. When we lift off the ground, it's like sitting on a chair and then being 50 feet in the air before you realize it. It's like being on a roller coaster but you're not on a rail." 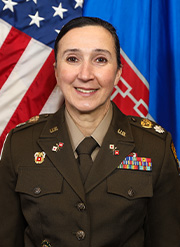 The Black Hawks arrived in Slippery Rock from Johnstown, home of the 1st Battalion, 230th Aviation Regiment, dropping off Sgt. 1st Class Benjamin Turgeon, a pilot who briefed the cadets while the four Black Hawks flew to Franklin to refuel and return to Slippery Rock. Some of the pilots were from the 230th and some, like Turgeon, were from the 28th Expeditionary Combat Aviation Brigade in Annville.

The flights benefit the Pennsylvania National Guard, helping pilots obtain hours for Readiness Level Progression training, which includes three levels, the second of which is mission-oriented training with instructors before pilots can fly without instructors and are considered ready for missions.

The flight time from Slippery Rock to Camp Garfield was about 45 minutes as the four Black Hawks flew in staggered right formation and reached speeds of up to 140 mph.

"This is more of a thrill factor for the cadets, and we're grateful to have a good relationship with the National Guard," said Lt. Col. Jennifer Martin, professor of military science and head of SRU's ROTC program. "Whenever (soldiers) are deployed, this is how you get from base to base. I've ridden in many Black Hawks because that's the easiest way to get around. But unless you're deployed or you're an aviator, you're not going to have many opportunities like this."

Lt. Col. Martin also said that riding in the Black Hawk also signifies the importance of CTFX, which will help prepare cadets for Cadet Summer Training at Fort Knox, Kentucky, this summer. CST is the largest training event in the Army where more than 10,000 cadets will be assessed for their eventual placement as officers next year after they are commissioned.

More information about the Army ROTC program at SRU is available on the University's website.