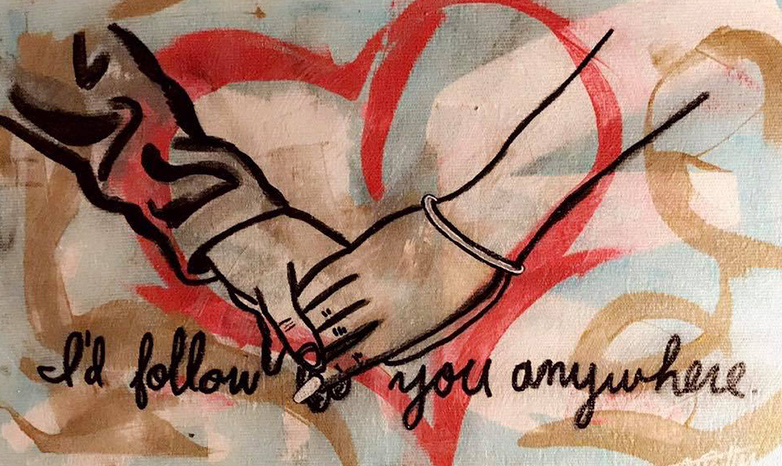 This original work by Zachary Rutter, a Slippery Rock University junior fine arts major from West Mifflin, was left behind for a lucky Londoner to find during a recent study abroad trip to England.

SLIPPERY ROCK, Pa. - Imagine an intimate studio with an easel propped on a country rug and a young artist holding a slender brush as he surveys each stroke on the canvas. Hours slide by like seconds as he solitarily mixes his paint, turning a blank slate into a personal statement.

Now envision a bustling metropolis, dotted with subways and cathedrals. A hub of diversity, busy men and women clad in business attire hustle across the city while others - less consumed by the minutia of the day - meander about, taking in the sights and sounds of the city and its history.

In the midst of the comings and goings, the same young artist enters the scene with a painted canvas gently rolled beneath his arm. He stoops, sets the painting on the sidewalk and turns away, nearly undetected.

Zachary Rutter, a Slippery Rock University junior fine arts major from West Mifflin, began putting "the gift of art" into the world when he left eight original pieces scattered across Italy during his freshman year. According to Rutter, those first works were "tiny and poorly executed" paintings, but each one inspired him to try again. 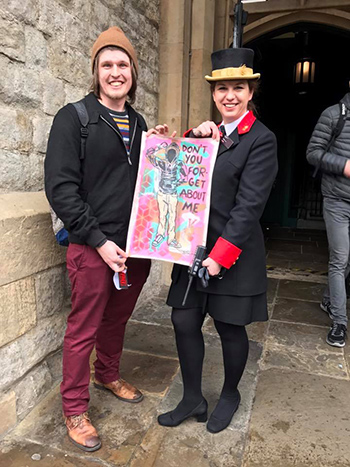 (From left) Rutter with a recipient of his “art drop” across London,
a guard of the Crown Jewels of the United Kingdom.

Two years later, Rutter decided the time was right for another "intercontinental exhibition," this time, as part of an SRU spring break study abroad excursion to London, England with his early modern art classmates.

The trip was chaperoned by Thomas Como, professor of art, who also directed the trip to Italy where Rutter's initial "art drop" took place.

This time however, the aspiring artist from Pittsburgh challenged himself to quadruple the number of canvases he could squeeze into a suitcase. Throughout a two-month period, Rutter completed 35 paintings that he earmarked for his trip across "the pond."

"I really pushed myself to do this. I began painting in January while still managing to remain focused on my courses and working two jobs. I haven't had much of a social life since last semester," Rutter said with a laugh.

Each composition, featuring an abstract human figure, was meant to showcase an articulate expression or emotion.

"I intended to keep both male and female figures simple, but it was the male model I decided to keep hooded," said Rutter. "You can't see their faces, but the emotion they convey is universal, something we can all address and understand."

One of Rutter's favorite works depicts a man and woman sketched from behind. The man's arms, draped around the woman's shoulders, symbolizes the beauty of romance and companionship, or, as Rutter put it, the joy of "making that sentimental gesture for the first time."

Not all of the paintings, however, portrayed an upbeat tableau.

"I presented one of my hooded figures with his hands held over his face ... you can just see that he is struggling with stress and self-doubt," said Rutter.

Whether the emotion of choice be euphoric or despondent, Rutter asserted that each work redeemed itself by offering an uplifting message. A poet as well as a painter, he included comforting and encouraging language to collaborate with his images.

"It all goes to say 'better things are coming,'" said Rutter. "I want this hope to be something we all can relate to."

Tucked inside each of the rolled canvases, that were wrapped with ribbon, was a description of the piece along with Rutter's biography and contact information for those who discovered the deserted works of art.

"I wanted my compositions to have way to connect with whoever found them," Rutter said. "More than that, I wanted them to be an emotional instigator that would allow the finder to appreciate feeling and looking as much as I appreciated creating."

Of the 35 canvases, Rutter received 20 "exuberant" text responses from Londoners that came across his works in addition to various Instagram and Twitter posts expressing gratitude for his "gifts." One of Rutter's recipients included a guard of the Crown Jewels of the United Kingdom.

Rutter, who planned his art drops to coincide with Como's itinerary, carefully "deserted" his paintings at renowned tourist attractions such as Big Ben, Buckingham Palace, Westminster Abbey and Abbey Road.

"I even placed one of them in front of Van Gogh's 'Sunflower' at the National Gallery," Rutter said with a laugh. "I mean, I just saw some of the most important paintings in the world, up close and personal, but left a contribution anyway."

Rutter, who has his sights on becoming a professional artist, believes that art is a vehicle that can make the world just a little bit smaller.

"In a place like London, people are coming to visit from around the globe. Like me, they are perhaps experiencing something new and exciting. I wanted to connect us, to bring us all together ... and through art, I was able to make those connections."