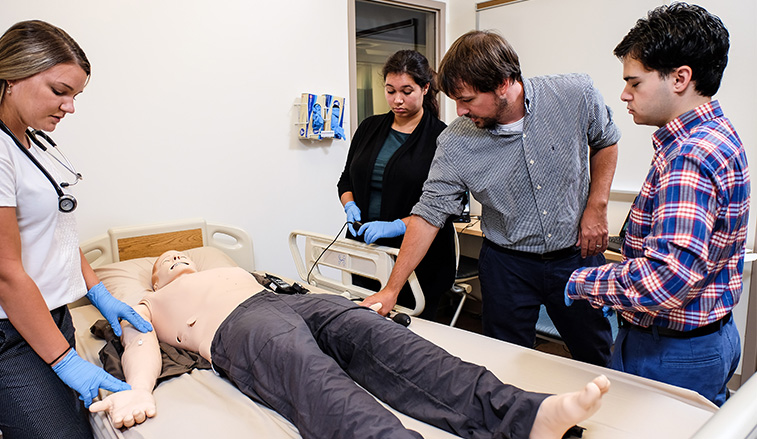 Slippery Rock University has added 17 academic programs in the last four years, including 13 programs that enrolled a combined 500 students in the fall 2017 semester. One-fifth of the students enrolled in new programs are from the Master of Science in Physician Assistant Studies program. Another four programs are targeted to launch between summer 2018 and fall 2019.

SLIPPERY ROCK, Pa. - One of the primary reasons why Slippery Rock University's enrollment is at an all-time high is the addition of a variety of new, market-driven academic programs, University administrators said. Nearly six percent of SRU students are enrolled in programs that were created in the last four years.

Of SRU's record fall 2017 enrollment of 8,895, exactly 500 students were enrolled in 13 programs that launched between the spring 2015 and fall 2016 terms. There are four additional programs that have been approved and will start by the fall 2019 semester, including the Master of Science in Hospitality and Tourism program that was recently advanced to Pennsylvania's State System of Higher Education board of governors for approval. The University has three additional programs in development.

The 17 programs already approved by the board of governors since April 2014 are focused on meeting the demands of both the workforce and student interest and are part of SRU's strategy to address the challenges caused by the declining number of high school graduates in the region.

"SRU strives to develop new programs that align with the mission of the University and serve the needs of the region and the Commonwealth," said Carrie Birckbichler, associate provost of planning, resource management and assessment. "All new program proposals also undergo a rigorous peer review that ensure they are financially viable. Without 500 students enrolled in new programs for fall 2017, our enrollment would not have reached the record number that it did."

According to Birckbichler, the 500 students exceeded headcount goals by a combined 118 students.

"We've taken a progressive approach by developing new programs which has been the key to our success," said Amanda Yale, associate provost for enrollment management, adding that the increase in programs will stabilize after the recent rapid growth. "We are strategically focused in areas that we know will bring good outcomes for the institution and meet students' needs."

According to Yale, almost two-thirds of surveyed SRU students want to pursue a post-baccalaureate degree. Therefore, 11 of the 17 newly approved academic programs are master's and doctoral degree programs.

SRU will see indirect enrollment increases by adding post-baccalaureate degree programs that go beyond the 500 students directly enrolled because students are enrolling in undergraduate programs with the intention of also pursuing a master's or doctoral degree at SRU.

Overall, Yale said the additional programs at SRU have made the University more competitive with a variety of institutions, whether that be larger research institutions, selective private schools, other universities in State System or schools that have similar specialty programs as SRU's, such as dance or music.

"New programs change our competitive structure," Yale said. "We have to diversify the programs based on the market demand within the region. As an institution, we can't just rely on the programs, like education, that we are historically known for to drive our future. This diversification of our programs is the key to success."