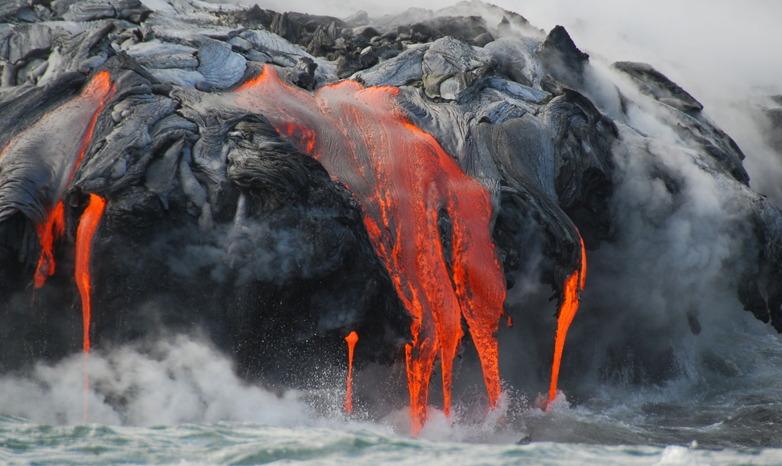 Blake Wallrich’s geological specialization deals with establishing a more defined link between what’s going on inside the magma chamber of volcanoes in conjunction to what is visible on the surface in order to better predict the potential for eruptions.

SLIPPERY ROCK, Pa. - When Blake Wallrich first arrived at Slippery Rock University two years ago he knew he didn't want to leave with only a diploma in hand. He wanted to accomplish something more, something beyond the ordinary. Wallrich was named a Goldwater Scholar March 31 by the Barry Goldwater Scholarship and Excellence in Education Foundation, a full year before he expects to participate in an SRU commencement ceremony.

In total, the Foundation awarded 252 scholarships - valued at $7,500 each - for the 2016-17 academic year. More than 1,100 students from 415 colleges and universities nationwide applied for the award.

"I am beyond excited," said Wallrich shortly after learning of the honor. "I'm sure it'll sink in later and I'll be able to come up with a better answer, but I know that I couldn't have done it without my professor, Michael Zieg, or my wife, Irene, or the department faculty. Their passion for teaching and how well they instruct is incredible."

A geology major from Pittsburgh, Wallrich's area of specialization deals with establishing a more defined link between what's going on inside the magma chamber of volcanoes in conjunction to what is visible on the surface in order to better predict the potential for eruptions.

According to Wallrich's research, there are more than 450 cities worldwide with populations in excess of one million people that are within 100 kilometers of an active volcano, making the predication process for potential eruptions that much more vital.

"Winning this award is like the icing on the cake for my academic career," Wallrich said. "It's very unexpected, but it also serves as reinforcement that I'm on the right track. It was a big jump for me to set aside a career and come back to school. This makes me realize that I made the right choice.

"My leap of faith is paying off, I guess you'd say."

Wallrich's journey to SRU began in 2014 following his move from Salt Lake City, Utah to Western New York. The move, the result of his mother-in-law's failing health, proved serendipitous.

After having spent five years working as a firefighter for the U.S. Fish and Wildlife Service in Jamul, California and the Bureau of Land Management in Salt Lake City, Utah, Wallrich decided it was time to work smarter, not harder.

"When I was in Utah, I was working on a hot shot crew which is not easy work by any stretch," said Wallrich. "You're dealing with wildfires and extreme conditions in dangerous situations.

"It's also not a very family-oriented field, so when we moved to New York, I knew it was time to apply my knowledge in a different direction."

Following in the footsteps of his wife, who also earned her undergraduate degree in geology, Wallrich, who already had two years of schooling under his belt, applied to a variety of universities after carefully researching the programs and faculties associated with each.

"I looked at how well-rounded each program was and immediately crossed off any school with a graduate program," said Wallrich. "I knew that I wanted a real relationship with my professors and wanted to work alongside them. I wanted to have a connection.

"After sitting down with Dr. Zieg in the spring of 2014, I knew immediately that SRU was where I belonged."

That was never more apparent then when Zieg, an SRU professor of geography, geology and the environment, partnered with Wallrich and Sam Hone, a geology major form Portersville.

The trio's collaboration resulted in Zieg being awarded a $163,424 grant from the National Science Foundation to continue his research into the physical evolution of magma chambers, and as a way to support undergraduate involvement in the scientific process. Wallrich and Hone assisted in all aspects of Zieg's research, including preparing rock samples, measuring crystal sizes under microscopes in SRU's imaging lab and analyzing mineral compositions using an electron microprobe in West Virginia. An electron microprobe is used to determine the chemical composition of small sections of rock. The tool uses an electron beam and X-rays to determine concentrations

"Blake has what I'd call 'scientific maturity,'" said Zieg. "This award is a well deserved recognition of his potential as a scientist and a scholar. It's a great stamp of approval to what he's already done as well as a forecast of what he'll accomplish in the future. His drive and curiosity are incredible. He grabs on to questions and won't let go until he has the answers.

"I have no doubt in my mind that he will be one of the top scientists of his generation."

Wallrich may have some company along the way from someone very close to him - his wife. Irene Wallrich is a Ph.D. student conducting research in the department of geology and environmental science at the University of Pittsburgh. Her research focuses on the environmental impacts and recycling potential of energy byproducts. She is currently working on a project to quantify how fluid-rock interactions between clay minerals and acid mine drainage affects alkalinity.

"I am delighted for Blake as an individual and for SRU as an institution," said SRU Provost Philip Way. "Since I arrived at the University four years ago, I have recognized how talented our students are, getting into highly competitive programs and landing responsible jobs, but we weren't encouraging our students to pursue the more prestigious national and international scholarships."

To that end, Way established SRU's Office for Distinguished Scholarships and Fellowships to mentor students through the many steps they must complete to apply for and land such scholarships, as well as providing assistance in writing viable proposals.

"It was special to have three of our students submit applications to the Goldwater Foundation and to have a winner is phenomenal," Way said. "Blake's honor will only add to the academic reputation of SRU. I'd like to extend my congratulations to him and the faculty who supported the students as they developed their applications. I know that this is the beginning of a trend at SRU."

The U.S. Congress established the Barry Goldwater Scholarship and Excellence in Education Program in 1986 to honor Senator Barry Goldwater, who served his country for 56 years as a soldier and statesman, including 30 years of service in the U.S. Senate.

The purpose of the Foundation is to provide a continuing source for highly qualified scientists, mathematicians and engineers by awarding scholarships to college students who intend to pursue research careers in these fields.

Since its first award in 1989, the Foundation has bestowed 7,680 scholarships worth approximately $48 million dollars.