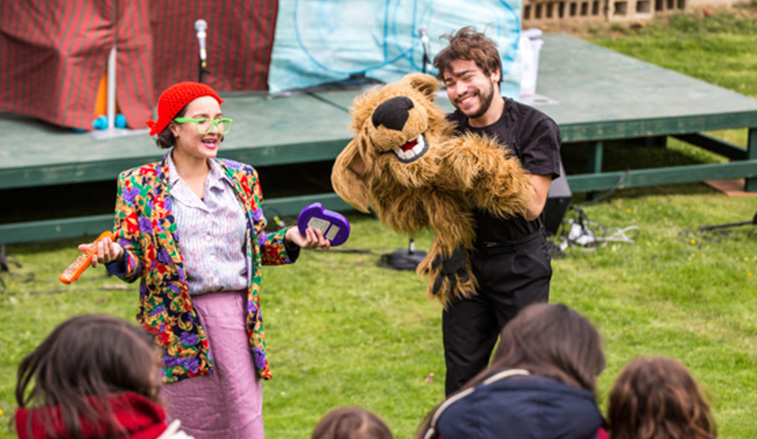 SLIPPERY ROCK, Pa. - While Deanna Brookens won't find either Philipe Petit or The Flying Wallendas in her family tree, she does share a common trait with two of the world's most famous performers - she's great at maintaining balance.

Then again, what else would be expected from the director of Slippery Rock University's Kaleidoscope Arts Festival?

"Keeping something this large fresh each year is a big undertaking," said Brookens, who "doubles" as an SRU instructor of theatre and works collaboratively with an eight-member faculty committee to oversee the operation of the festival. 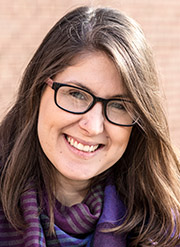 This year's event, the 17th annual, takes place April 12-28 and will feature more than 30 dance, theatre, music, literary and visual arts events. It all kicks off with an hour of live student performances at 12:30 p.m., April 12 at Boozel Dining Hall.

In addition to visiting artists and performers, a variety of student artists and SRU faculty will provide offerings including: a senior dance concert and a variety of music concerts featuring flute, trumpet, euphonium, woodwinds, strings, and a performance by the SRU Orchestra.

Another highlight will be "Kaleidoscope on Main," hosted by Slippery Rock Development, Inc., from noon to 5 p.m., April 28 on Main Street. The family-friendly, community event will feature various vendors, children's crafts and activities as well as local and SRU-related artists and performances, including: Miss Melanie & The Valley Rats, Harmony Road and the SRU Jazz Combo.

"Planning an event of this size really is a nearly 365-day effort," Brookens said. "As soon as one festival ends, we go into assessment mode to figure out what worked, what might not have, and what we can do to improve it for the next year. We want to look at what people were really excited about seeing, hearing and doing and build on that. When you're catering to the individual arts - dance, art, theatre - and trying to satisfy and bring something special to not only those contributors, but the spectators and performers as well, it truly becomes a balancing act.

"Regardless of the art, however, we always want to make sure we find something cool that will have broad appeal to everyone."

Brookens believes the festival committee found just that in the booking of the touring company of the Upright Citizens Brigade. The UCB is a New York-based improvisational and sketch comedy group, founded in 1990 in part by, among others, actress and former "Parks and Recreation" star Amy Poehler. The group will perform a 70-minute set at 7 p.m., April 27 in the Smith Student Center Ballroom. The event is free and open to the public.

"(UCB) is one of the three biggest improv groups and/or schools in the country," said Brookens. "America. It's UCB in New York, The Second City in Chicago and The Groundlings in L.A. When we were looking at the broad appeal aspect, comedy is something that everyone, at least in my experience, seems to enjoy. I know that my students respond to it and laughter can really provide a point of connectivity for all people.

When I made the pitch to the committee about bringing UCB in, it was really exciting to see everyone jump on board. When you listen to the news, it's easy to see that we're in the middle of national mental health crisis and studies continue to show time and again that comedy is an effective coping mechanism for stress."

"The English Department is celebrating the bicentennial of Mary Shelley's "Frankenstein," so it seemed natural to bring Sirota in for such a unique experience," said Brookens. The evening will feature SRU student actors and singers performing readings from Sirota's Off-Broadway work that, based on Shelley's novel, explores the human need for love and companionship. Having lost his mother at a young age, Victor Frankenstein seeks to end man's morality and arrogantly enters territory beyond his control.

Sirota, who is also an established and published research scientist, earned a Ph.D. in physics from Harvard before studying music theory and composition at Brown University.

This year's event will again see the festival taking advantage of SRU's Common Hour to share additional presentations with students rushing through the Smith Student Center.

"Being able to take advantage of that time period allows us to reach a wide audience and tap into one that is already gathered at a particular venue," said Brookens. "The response to having an artist share their work and ideas was incredibly positive, so we decided to not only continue it this year but expand."

This year's two-event offering kicks off April 17 with SOAR: An Interdisciplinary Performance Project. SOAR is a multi-disciplinary collaboration, infusing the concepts of African-American studies, art, astronomy, biology, dance and sustainability. Investigating the connections of macro and micro movements of wind, space, butterflies and human movement will "inform the development for a sailcloth art installation with interactive dance." The goal of the project is to collaborate through art creation and dance choreography to seek relationships of movement and pattern in space.

The collaborative project will be presented in the Vincent Science Center Planetarium.

Pittsburgh-based painter, muralist and former Pirate Parrot mascot, Tom Mosser, will take this year's Common Hour artist slot April 19 with a 12:30 p.m. talk and 2:15 p.m. demonstration. While much of Moser's best known works revolve around sports - as evidence by the 50 pieces he created for the NBA's Orlando Magic - Mosser is focused on his Warrior, heART and "At the Museum" series. The Warrior series is inspired by his love of yoga and the classic "Warrior" pose, while the inspiration for heART came about following years of creating heart-based paintings for an annual "Anti-Valentine's Day" charity event.

Of his "At the Museum" series, Mosser said, "I am incredibly inspired by the theme. While at the Museum of Modern Art in 2010 I was struck by the juxtaposition of a rather conservative woman standing mesmerized in front a huge and violent abstract painting. The idea was in place.

The signature piece for the series is "A Golden at the Museum" which depicts a golden retriever admiring a giant painting of a tennis ball. The piece was shared more than 100,000 times on social media in the month following its initial posting in March. It's the first of many canine related works in the planning.

A new wrinkle to this year's festival is the incorporation of SRU's annual Ethics Bowl.

The fourth annual event will take place from 9 a.m. to 12:30 p.m., April 14 in the Smith Student Center and provides teams of 3-5 students with opportunities to confront and discuss ethically complex, real-world cases and develop thoughtful responses as they contend for justice.

"This event is not to make ethics easy, by any means," said Andrew Winters, SRU instructor of philosophy, "but to illustrate how we don't give enough time to the issues that are important to us.

"(The Ethics Bowl) helps to explicitly develop critical thinking skills as they relate to moral dilemmas and move beyond mere content. Students become more informed about how to speak of these things in a sensitive way and how to appropriately respond in certain situations."

An outgrowth of the Intercollegiate Ethics Bowl developed in 1993 at the Illinois Institute of Technology, SRU's competition is posed in a quiz bowl style. A panel of judges will select four of five predetermined case studies, ranging from politics to mental health or environmental issues, and present questions to two teams at a time.

Teams will be offered response and rebuttal periods, which will be scored for consensual presentations, consistent positions and case-by-case relevancy.

While the bowl is structured similarly to a debate, the competition's ultimate goal is to unify over common objectives rather than divide over controversies though a conversation-styled event.

The always-popular Children's Earth Day Celebration is from noon to 4 p.m., April 21 at SRU's Robert A. Macoskey Center for Sustainable Systems Education and Research. The event will feature a variety of activities focused on educating kids to improve themselves and the environment, including: arts and crafts, games, live performances and earthy-friendly and interactive demonstrations with local sustainability vendors. A petting zoo and horseback rides will also be offered.

Scouted by Brookens almost a year ago, the Bright Star Children's Theatre Company will again perform at the event. The troupe was founded 14 years ago by David Ostergaard, an Emmy-winning actor whose work has been featured at The Cannes Film Festival and on Showtime in the Academy Award-winning short, "Two Soldiers."

The group will perform "Upcycled Cinderella" at 1 p.m., followed by a 2 p.m. performance from the New Castle Playhouse Mini Stars, and a 3 p.m. performance by the Music Therapy Club at SRU.

The Earth Day Celebration will continue from 4-8 p.m. with "EarthFest 2018" featuring sustainability-focused activities for adults, families and college students, including DIY workshops, a silent auction, sensory trail, sustainable food, live music and a bonfire at dusk.