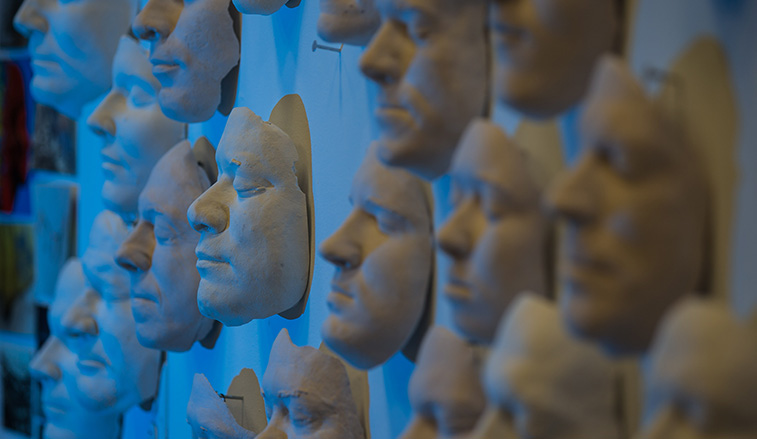 Kaci Flora, a Slippery Rock University art student, is exhibiting her senior art project, “Faces of Courage,” May 7-10, at the Martha Gault Art Gallery. The exhibit features plaster castings of the faces of 50 police officers.

SLIPPERY ROCK, Pa. - Keeping the peace, protection of people and property and the investigation of crimes. These are just a few of the many duties associated with being a police officer. It's a challenging vocation to say the least. Especially when you're potentially putting your life on the line each day. As a tribute to the courage of the men and women in blue, an art student at Slippery Rock University is casting a new light on law enforcement personnel - by casting their faces.

Kaci Flora, a senior art major from Slippery Rock, is capturing the faces of 50 police officers with plaster castings for her Bachelor of Fine Arts senior exhibition titled "Faces of Courage." The exhibit, on display May 7-10 at the Martha Gault Art Gallery, will feature face castings of police officers arranged on the gallery wall to represent the Thin Blue Line, a symbol used to identify law enforcement, as if emerging from a protective barrier.

"I wanted to put some faces with their symbol," Flora said. "Police officers have to defend themselves every day, not just for their job but their actions on the job. They are invisible behind their shield and behind their gun." 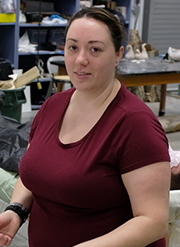 Six of the faces in Flora's exhibit are relatives, including her uncle, Cpl. Steven Walters, a Bethel Park resident and member of the Pennsylvania State Police, and her cousin, Petty Officer 2nd Class Marshall Parker, a military police officer in the U.S. Navy stationed in Port Orchard, Washington.

"They are not invisible to me because I grew up with them being part of my family," said Flora, who admits to seeing a different side of law enforcement through her project. "A lot of the officers just do what they do to help people and the bond they have means a lot more to them than what you would think. They would drop everything if they needed to help you. It's impressive."

Nearly half of the participants, including 11 officers from State Police Troop D in Butler, came to the James C. Myford Art Sculpture Building at SRU, while Flora met others near Pittsburgh for the approximately 35-minute casting sessions.

"We're just glad to help," said Sharkey, a former police sergeant at Braddock Hills before joining SRU in 1999. "Law enforcement people are caring and always willing to help somebody whenever they can, and as busy as people's schedules are to take the time to do something like this is impressive. I can't believe she got this many people involved."

To create the castings, officers laid on a table, with straws in their nostrils for breathing, while Flora poured alginate, a putty-like substance used for dental impressions, over their faces. Flora then placed plaster gauze over the alginate to hold it in place and then waited for the two layers to dry. After removing the two layers, Flora poured plaster into the alginate mold, creating a virtual positive image with the alginate serving as the negative. After the plaster casting dried overnight, Flora used a rotary drill to chip away excess bubbles and drips that sometimes appeared, like tears from the eyes.

"The castings are really life-like," Flora said. "You can see the dimples, and every little pore and hair follicle. That's what I like about castings, they are a 100-percent replication of a face."

When Sharkey sat up from his casting session, he appeared as if he woke from a strange dream, saying, "That was weird," before toweling off and adding with a smile, "It wasn't bad. When I go to the show I'm going to see if I can pick myself out."

Rather than witnesses identifying a suspect, the "Faces of Courage" exhibit will feature a different kind of police lineup, one that provides hard evidence of law enforcement officers as human beings.

"These men and women don't just represent police officers, they represent people with families," Flora said. "They are good people and they stand for what they believe. They have a face behind their job."