SRU dancers and artists collaborate to “Soar” like butterflies April 17 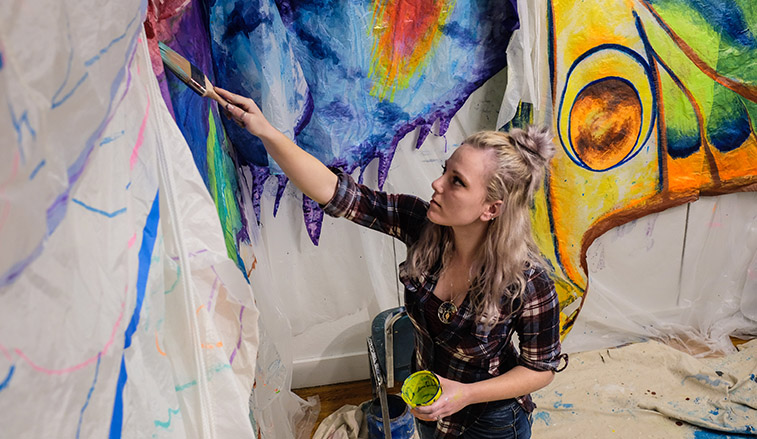 Destiny Blackwell, a Slippery Rock University art major from Middlebury Center, prepares recycled sailcloths that will be worn by dancers for “Soar: An Interdisciplinary Performance Project,” April 17, as part of the Kaleidoscope Arts Festival.

SLIPPERY ROCK, Pa. - Experiments taking place in a science building are not surprising. But the nuance of an artistic experiment at Slippery Rock University's Kaleidoscope Arts Festival may surprise audiences when "Soar: An Interdisciplinary Performance Project" takes flight, April 17 at the Vincent Science Center Planetarium.

The convergence of ideas from biology, astronomy, history, dance and art might cause mixed terminology - "Soar" is a performance, not an exhibit, and the performers will be wearing art, not costumes - but the two 20-minute shows at 12:30 and 1 p.m. just might leave the audience at a loss for words. 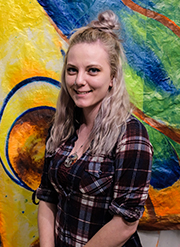 "I want them to be shocked," said Destiny Blackwell, a sophomore art major from Middlebury Center, one of three art majors who painted recycled sailcloths that will be worn by dancers to mimic the movement of butterflies.

"It's going to be an up-close, intimate experience," said Olivia Nellis, a junior dance major from Glenshaw, one of four dancers who will not have as much space to move in the planetarium compared to a stage.

But because "Soar" is a new venture, there's an element of surprise even for the participants. 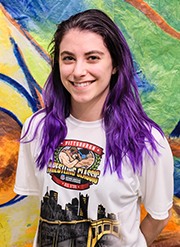 "This has been somewhat of an experiment," said Nellis, while holding a brush in the paint studio, away from her usual setting in the dance studio. "The art students are experimenting with the material and the paints, but as dancers we're experimenting with how we're wearing the sailcloths, how they move, how our bodies control them and the sounds they make. It's a big learning experience."

"This allows for art and science to interact in a beautiful way," said Ursula Payne, professor of dance, whose students worked with Susan Rehorek, professor of biology, to learn the movements of butterflies, which for the show are three-dimensional and beyond simply flapping. "It's having an experience of watching these forms come together ..." 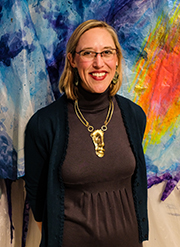 "... And taking them to a new place," said Heather Hertel, associate professor of art, completing Payne's sentence, emblematic of the collaboration between their two departments. "We're overlapping worlds and creating moveable, kinetic art with recycled sailcloths. Being informed through science to make art has been super interesting and everyone has been engaged to allow the unfolding."

Hertel, an artist who uses sail cloth as her canvas, has previously collaborated with SRU dance students, who performed during one of her outdoor exhibits aboard a tall sailing ship in Baltimore last summer. However, an indoor performance with sail cloth as wearable art, is new for Hertel and the students. Additionally, "Soar" will feature acrylic and fluorescent paints that glow like neon under a black light.

"It's not like you're coming to a regular dance performance and you're watching bodies; it's the experience of the whole event, the atmosphere and the mood that is created," said Payne, who anticipates using natural soundscapes as part of the choreography. "You're going to be able to see the light, the form, the paints and the art come alive."

The students have also come alive in their intellectual and creative curiosities.

"Even though we're all working on the same project, we all contribute with different ideas and I see things that I would've never thought of on my own," Blackwell added. "This has helped me a lot. I was really excited (when I was asked to contribute). It's a lot of work, but it's going to be worth it."

"Soar" is free and open to the public; however, seating is limited to 50 per show. A question-and-answer session will follow the performance. For more information about the Kaleidoscope Arts Festival, visit: www.sru.edu/kaleidoscope.