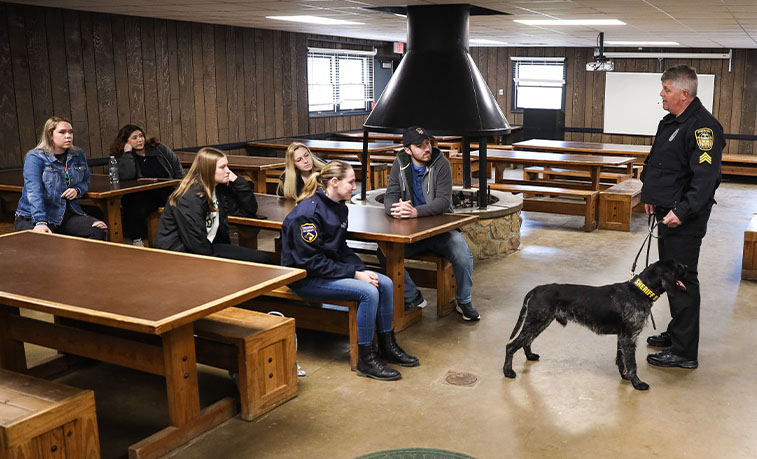 Justice, a police dog that is part of the Butler County Sheriff’s Department’s K-9 unit, and Sgt. Harry Callithen conducted at demonstration at the Slippery Rock University ski lodge for members of the Criminology Club at SRU.

SLIPPERY ROCK, Pa. — In the interest of Justice, the Criminology Club at Slippery Rock University recently welcomed a special guest to campus. "Justice" is the name of a 3-year-old German wirehaired pointer that is part of the K-9 unit with the Butler County Sheriff's Department. Sgt. Harry Callithen and Justice visited with SRU students from the Criminology Club, April 8, at SRU's ski lodge, for a presentation to show the capabilities of the K-9 unit to students who are aspiring law enforcement professionals.

"It's always cool to see in the movies how police dogs are used, but there's nothing like seeing them in person," said Zachary Kolesar, a senior criminology and criminal justice major from Allison Park, who is the treasurer of the Crim Club. "What better way, with Butler's police department close by, for them to come in and engage with college students, and college students to engage with them. It's a win-win."

Callithen spoke to the students and conducted a demonstration using a training aid where he put traces of methamphetamines in a cupboard and had Justice detect the location. The students also went outdoors to see Justice's tracking capabilities, as he was hidden from a student who walked about 100 yards from the ski lodge, only to have Justice later track the student's path.

"This is a great opportunity for students to see one facet of law enforcement that they can get involved with," Callithen said. "You don't just show up at the police department on day one and become a canine officer. It's a lot of responsibility. It takes someone who has been educated and understands that it is a powerful tool and a use of force, if you're using a patrol dog, and knowing when certain things need to be applied."

Justice is not a patrol dog, which are often German shepherds that are trained to conduct buildings searches, bark at suspects if they are running away or chase them down and bite them if they are escaping. Instead, Justice is a single-purpose police service dog, trained for tracking and to detect drugs such as heroin, methamphetamines and cocaine. 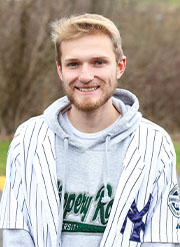 Kolesar was particularly interested in the demonstration as he will be working as a seasonal police office in Ocean City, Maryland, this summer.

"It's important to just be aware of what other police departments may have and to know as an officer what the dogs are capable of," Kolesar said. "I'll know the situations where people can get bit and when to stop when police dogs are barking. This experience has been educational for me and hopefully it helps me in my field."

The Crim Club at SRU includes more than 90 members and about a dozen attended last week's demonstration.

Justice has been working with Callithen for more than a year and a majority of the work they do is for educational demonstrations such as the one they conducted at SRU. The calls of service vary from two to three in a week to once during a span of two months. The Butler Sheriff's Department received Justice through donations of more than $11,000 that covered the cost of buying, training and outfitting the new police dog.