“Test Drive” is a novel by Patrick McGinty, Slippery Rock University instructor of English, that is scheduled to be released May 24.

SLIPPERY ROCK, Pa. — Like any emerging technology, driverless cars and autonomous vehicles have certain limitations, with everything from public acceptance and logistical concerns to costs and access. The same goes for people writing about the driverless car sector and describing what's possible or what could happen in the industry. A Slippery Rock University professor is navigating new roads and contributing new ideas to the topic of driverless cars thanks to his creative outlet of fiction writing.

"Fiction lets us hop over walls of reality that we'd otherwise run up against," said Patrick McGinty, instructor of English. "I say, 'let's leap ahead five years and envision what this is like.' Once you've stopped running into the same think piece or (nonfiction essay) over and over again, you need to just imagine, 'OK, it's here; the technology exists. Now what happens?'"

Enter McGinty's contribution, a novel he authored titled "Test Drive," which is the first fictional work to dramatize the existential crises faced by individuals working in the driverless car sector. The book is set in the year 2030 in McGinty's hometown of Pittsburgh, known now as a hub for the autonomous vehicle industry.

"One of the barriers of driverless cars is we don't know what they are going to look like in society," McGinty said. "We can anticipate, we can guess, we can read all these books and articles, but fiction lets us look beyond what reports, theories or other ideas bash into."

McGinty's novel is about a group of mechanics and test drivers at a fictional driverless car company who decide that their technology is not going to work so they "skim" spare parts of the cars to sell. When the group decides to steal and strip a full driverless prototype, "driving--and life--gets even more risky," as the book's back-cover blurb reads. 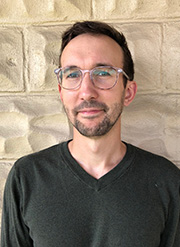 "The unit in that class produced some of the best work that I've ever received from students with them writing these incredible stories," McGinty said. "For students, they've never been in a driverless car company or in a driverless car, but we have smart students who have perspectives that, quite frankly, many of the people who work at these companies don't even have."

McGinty has written about autonomous vehicles for many publications, including The Baffler, and he's been interviewed on podcasts and in other settings on the subject, including a virtual presentation for Partners for Automated Vehicle Education.

"I've always been sort of skeptical of how fast (technology) moves and what (companies and society at-large) are willing to sacrifice as they move," McGinty said. "I don't consider myself a cynic. I wouldn't teach a class on this subject and get excited about it if I was a cynic. I'm certainly not trying to make anybody come to where I am. I'm just trying to show my journey, whether it's as an (author or reader) or sort of a theological journey, and hopefully have conversations about it. Some of the conversations I've had about driverless cars have been some of the most unexpected and inspiring conversations of my professional life."

Assisting his journey as a novelist, McGinty received a $4,000 grant through Pennsylvania's State System of Higher Education Faculty Professional Development Council grant program. "Test Drive," published by Propeller Books, is scheduled to be released May 24 and preorders can be made on the Propeller website.

Listen to more from McGinty, who was a recent guest on the "Hello, SRU" podcast.