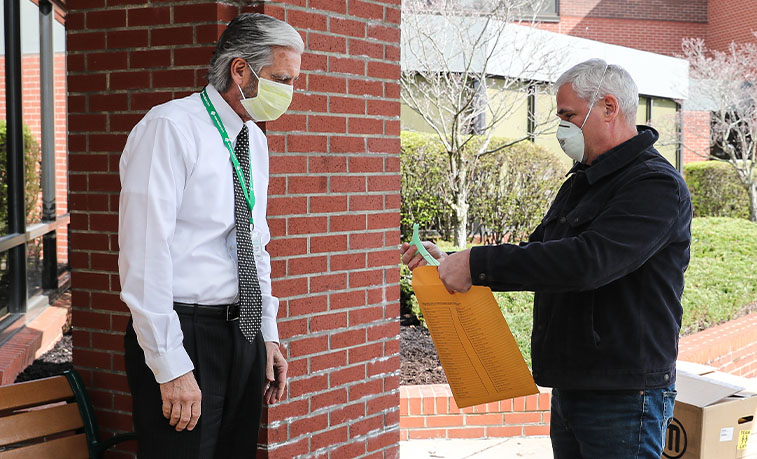 SLIPPERY ROCK, Pa. — Earlier this month, Slippery Rock University provided surplus personal protection equipment to local hospitals and first responders in the fight against the COVID-19 pandemic. Now, the University is taking those efforts one step further by making its own supplies from scratch through the use of 3D printers.

Eight 3D printers from various SRU departments have been used to create more than 100 face shields. The printers were delivered to the homes of faculty members for them to create plastic frames that, when affixed with 8.5-by-11-inch clear plastic sheets, produced the face shields.

"Every little bit helps," said Jack Livingston, associate professor of geography, geology and environment, who helped coordinate the effort. "If everyone who has a 3D printer is using them for projects like this, that will make a huge difference." 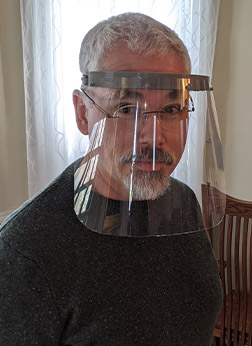 "This is another example of the SRU community joining efforts and truly becoming better than the sum of its parts," said SRU President William Behre. "I'm continually amazed by the ingenuity, teamwork and generosity of our faculty, staff and students as they support each other for the greater good during these unprecedented times."

3D printers are devices that use a computer-aided design model to create three-dimensional objects by layering filament, often a type of thermoplastic, onto a printing surface. Most of the 3D printers at SRU are used for design purposes and student learning, such as creating a fossil replica, although some faculty will use them to save from ordering parts for their laboratories.

"We have faculty from across several departments who want to do something for a good cause," Livingston said. "We have professors from geology, engineering, computer science, art and even a dean with a background in English who are all saying, 'Hey, this is a good idea; let's get this done.' This is where the idea of silos completely goes out the window, and it's a reminder that (SRU) is a community filled with really good people."

The sense of community might be contorted with faculty, staff and students abiding by stay-at-home orders, and only three faculty operating the eight 3D printers from their homes, but several people coordinated the effort through video-conference meetings, emails to help each other access equipment and instructions.

The process started with Michael Zieg, interim dean of the College of Health, Engineering and Science, sending an email to several faculty inquiring about the use of SRU's 3D printers to create personal protective equipment. At first, they considered N95 respirators, which are in high demand, but so are the copper-infused, antimicrobial filaments needed to make them. Instead, Livingston looked into other options and found a website with the specifications to print face-shield frames using a more readily available plastic filament.

Although the printing area of the some of the devices are only 18-by-12-by-12 inches, the units themselves can be more than nine cubic feet and weigh more than 100 pounds, like the MakerBot Replicator Z18. "You're not going to ask your wife if you can put this on the kitchen table," Livingston said with a laugh. "It's the size of a small stove."

Livingston brought his department's printer home, while Jon Shumway, professor of art, operated two from his department at his home, and Sam Thangiah, professor of computer science, housed the remaining five. They also received assistance from two students: Kyle Sayre, a senior physics major from Slippery Rock, who normally works with the three 3D printers in the engineering lab with Athula Herat, associate professor of physics; and James Jablonski, a senior interdisciplinary programs major from McDonald, who previously worked with the machines in an Archeology Techniques and Lab class taught by Aksel Casson, assistant professor of interdisciplinary programs.

"When Dr. Herat emailed about helping I immediately said, 'Yes!'" said Sayre, who plans to pursue a career in electrical engineering. "I heard other companies were doing this and I'm glad that we're getting involved with it as well. I want to be able to help the people that need assistance, especially now with hospitals being so short on supplies."

According to Sayre, the most challenging part of the project was working with the different models of 3D printers, as each is programmed by various computer software. For example, one professor could be using a FlashForge Creator Pro and another the MakerGear M2, or they might be using different software programs like SolidWorks. 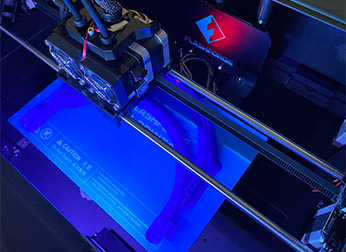 The FlashForge Creator Pro was one of eight
3D printers owned by SRU that were operated
by faculty in their homes to create frames for
protective face shields.

"The biggest thing is navigating through the different software," Sayre said. "They all accept an STL file, which is basically the finished product of your design, and they convert it to what's called a G-code and the printer uses that G-code to print the object."

Once the 3D printer is programmed, a spool of plastic filament is fed into the device. The filament is heated and deposited as liquid from an extruder nozzle onto the printing area in tiny beads that adhere in layers to form a three-dimensional object.

Another challenge was time. The 3D printers SRU owns are primarily used for design and not mass production like the models used by manufacturers. Each frame took roughly two and a half hours for Livingston to print. Livingston, Thangiah and Shumway were able to produce up to 12 per day before Livingston collected all the frames and added the plastic shields to complete the masks.

The filament was collected from reserves on campus while the plastic shields were purchased by the CHES.

"It forces you to learn in a hurry and there's no calling for tech support," Thangiah said. "Overall, this a great way for us to reach out to the community, and as a State System university it's important that we find ways to benefit the public good."