SRU class combines students from inside and outside of prison 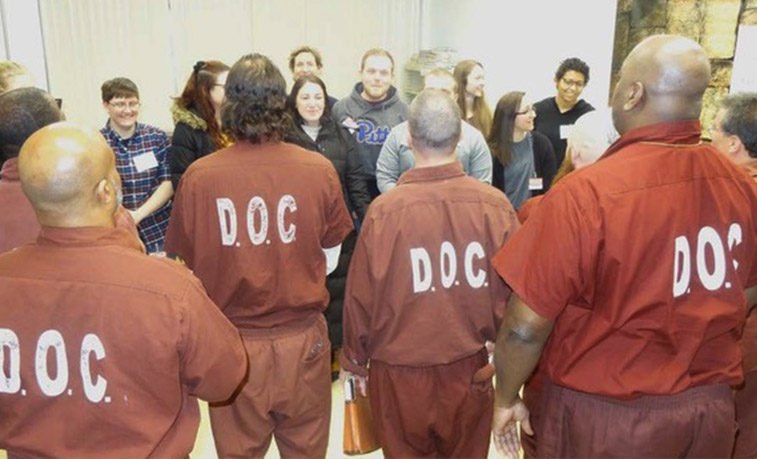 SLIPPERY ROCK, Pa. — People often compare an undesirable and lengthy waiting period to having served a prison sentence. But a group of Slippery Rock University students are bucking that trend and savoring the fact they are "serving time" as part of an experimental class with incarcerated classmates.

The Inside-Out Prison Class, a 300-level course being offered for the first time this semester at SRU, brings together college students with incarcerated students for a semester-long course in a correctional setting. Twelve SRU criminology and criminal justice majors, the "outside students," are taking a class alongside 12 incarcerated individuals, or "inside students," from 8:30-11 a.m. every Wednesday in a classroom at the State Correctional Institution-Mercer.

"When the class is over and I say we are done, no one wants to leave," said Sarah Kuehn, associate professor of criminology and criminal justice. "It's been the most rewarding teaching experience for me."

"I've wanted to go to every class," said Malachiah Koehler, a senior criminology and criminal justice major from Slippery Rock. "That's not the case for most college classes, even ones where I didn't have to drive a half-hour from campus to attend. This has been a once-in-a-lifetime experience because you don't really understand prison life unless you have been there, and this is the closest that I can get to understanding the mindset of people within those walls without being there myself." 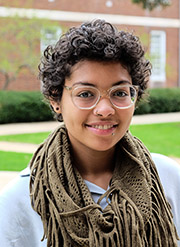 Kuehn learned about colleges that successfully implemented the Inside-Out concept when she attended an Academy of Criminal Justice Sciences meeting in 2015. Two years later she attended an American Society of Criminology workshop at SCI-Graterford with other Inside-Out instructors. The concept was first explored in 1995 by Lori Pompa, a professor at Temple University. Pompa's work led to the creation of a formal program housed at Temple that has trained more than 800 instructors in 30 countries.

"I find prisons very fascinating as a response to crime," said Kuehn, who conducted research at local prisons and as a consultant for Butler County Prison's reentry program. "The Inside-Out Class is a win-win for both groups. SRU students go in knowing only what they know from a prison tour or from textbooks, so they are learning from people who are involved with the criminal justice system. And it's not just learning from them; it's learning together. The inside students see this as an opportunity for intellectual stimulation and learning from the (outside students') book knowledge. Some of them are experiencing a college class for the first time and through their participation in these classes they can gain the confidence to consider attending college when getting released."

Kuehn said the win for the inside students is also a win for the public, including taxpayers, according to research. A whopping 75 percent of released inmates in Pennsylvania return to prison within 19 months for parole violations or new offenses. Pennsylvania citizens pay annually more than $42,000 for each state prisoner and about $26,000 annually for those in county jails.

"Investing in their education and future might actually be cheaper long-term since the lack of education has been shown to be strongly correlated with offending, not to mention the benefits for public safety if they don't reoffend," Kuehn said.

In most IO programs, inside students earn college credits by taking the classes, but because SRU's offering is an experimental class, the participants only earn a certificate that could be used as merit at a parole hearing.

Both groups of students for the SRU program are carefully selected. The outside students who applied for the class had to be criminology and criminal justice majors in good standing who were required to write an essay about why they should be considered for the program. They also had to secure the appropriate security clearances. The inside students, none of whom are sexual offenders, were selected by prison officials based on their reading level, good behavior and who had no misconduct reports in the last year.

The SRU students report feeling safe in the prison, even though many said they were uncomfortable upon initially meeting their new classmates.

"When we first walked into the classroom, the tension was palpable and everyone was anxious," said Kuehn, who administered icebreaker activities where students sat in concentric circles and rotated like a wheel asking each classmate a prompted question. "Once we started communicating, everyone started opening up and laughing and it was amazing to see that. From then on, it's grown and exceeded my expectations for how well they have bonded."

"Some students were concerned for the awkward experience, just because of the dynamic," said Koehler, who was one of the only females in the class because SCI-Mercer is a men's only prison. "We were awkward that first class, which made the icebreakers important, because we all had our biases and assumptions. That helped ease the tension."

Brad Boring, a junior dual major in criminology/criminal justice and interdisciplinary programs from Pittsburgh, could relate somewhat to the prison setting because his mother was incarcerated for parts of nine years, but it was still a transformative experience for him.

"I had a better connection with the inside students because I know what (being incarcerated) does to families," Boring said. "I was also able to relate to the outside students in their view that (the incarcerated) are human beings and everyone makes mistakes. I was used to visitation time, but I didn't know what happens after those doors closed, so (the class) enlightened me more to what actual prison life is like. The experience opened my eyes and I feel like I can relate to people better from having taken the class."

The social experience helped to enhance the understanding of the class content, which covered a variety of topics. Content areas included the purpose of prisons and restorative justice; punishment; rehabilitation; and victimization.

According to the course syllabus, the class is designed to "provide students with a broad social psychological understanding of both the effects of crime on community structures and the challenges the criminal justice system faces in responding to crime in our contemporary society." The students read three books for class, including "Just Mercy," authored by Bryan Stevenson, a lawyer who founded an equal justice initiative.

"The discussions we had changed my life," said Koehler, who decided during the semester that she wanted to become a lawyer instead of a correctional counselor. "It was a reality check that humbled me but made me want to learn more. This class wouldn't be the same class on campus and without the inside students. It takes their input to change perspectives and for the discussions to get somewhere (meaningful). Some of the inside students have been in for 20 years, so they provide a perspective of what the prison system was like when they first got in and how it's changed. That's something you can't learn in a textbook - you need to actually get that first-hand account."

The students also worked together in small groups, composed of both inside and outside students, to complete research projects based on topics provided by Kuehn.

"It's been quite amazing how the two types of students have come together as one class," said Kuehn, who is currently seeking approval to get the Inside-Out class offered at SRU as a permanent part of the curriculum. "You have younger college kids from middle-class backgrounds and male inmates who have grown up in adverse environments, and we had to overcome those educational and social gaps. The level of eagerness of both groups to learn and contribute to the class, as well as the respect and appreciation of other people's views, has been just amazing."