SRU student advocates for bone marrow donations through ‘Be the Match’ 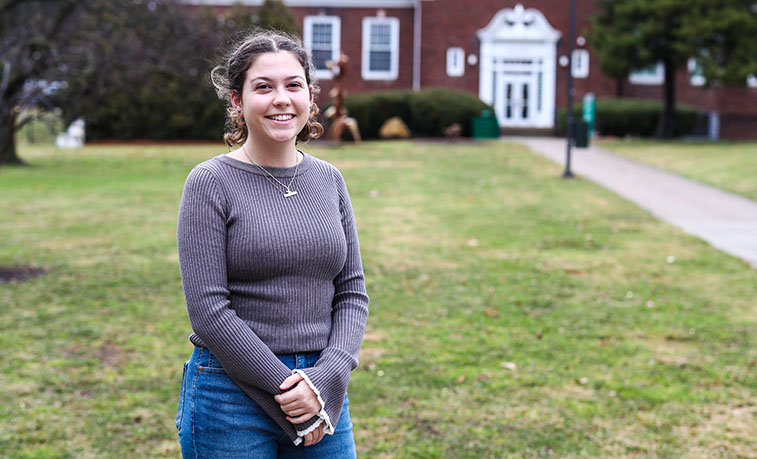 Madalyn Mote, a Slippery Rock University junior early childhood education major from Gibsonia, donated bone marrow to her brother, Nicholas, who was diagnosed with aplastic anemia, and she has become an advocate for the “Be the Match” campaign.

SLIPPERY ROCK, Pa. — Many Slippery Rock University students have interesting life experiences encountering both adversity and advocacy. One such example of is Madalyn Mote, a junior early childhood education major from Gibsonia. In 2016, Mote's younger brother, Nicholas, was diagnosed with aplastic anemia, a disease in which the body fails to produce blood cells, and he was in need of bone marrow. Mote then sprang into action.

"I was in always in transplant mode during that time," Mote said. "I had a 25% chance of being a match for my brother, and it was always in the back of my mind."

For people with blood-related diseases, transplants are the best chance for recovery; however, only 1 out of 4 patients have a fully matched donor within their family. After many tests and blood withdrawals, which was the most nerve-wracking part for Mote, she was found to be a perfect match for Nicholas. As a donor, Mote underwent surgery to remove marrow from her body, which was promptly transferred to her brother.

"He was getting my marrow before I was even fully awake," said Mote. "It was a quick outpatient surgery for me. I only had to take a couple Ibuprofen (as part of my recuperation)."

Since then, her brother, who plans to enroll at SRU next fall, has made a full recovery, and Mote has begun advocating for "Be the Match," with the hopes to foster more success stories like her own. Be the Match, operated by the National Marrow Donor Program, is a marrow registry that connects patients with their perfect donation match.

During the fall 2021 semester, Mote organized a Be the Match drive through the SRU Honors College, enlisting around 50 people to sign up for the registry. She anticipates hosting another drive in fall 2022 because it is a cause she's passionate about.

"My story is not the same as everyone else's," said Mote. "Mine may seem scary, but this is not the case for everyone. Bone marrow recreates itself. We have plenty to give, and there is such a great need for it."