SRU student brought back to life by classmates, first responders 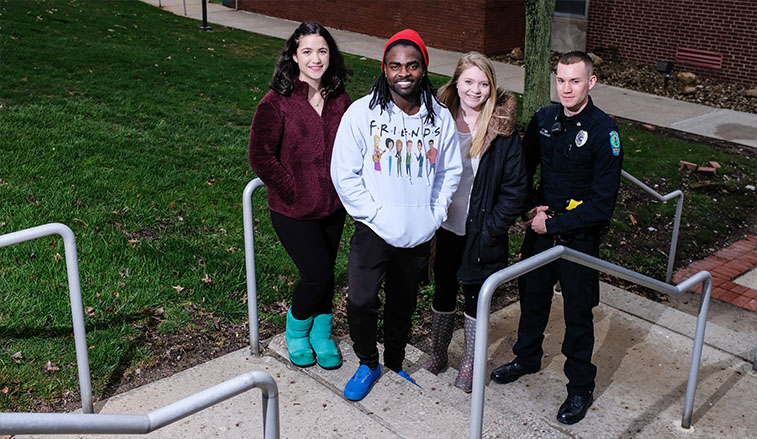 Back row from left, Slippery Rock University students Samantha Balaj and Samantha Dyer, along with Trevor Buckley, University Police patrol officer, meet as a group with SRU theater major Frantzi Schaub (foreground) for the first time after they saved his life. Schaub, wearing his favorite “Friends” sweatshirt, went into cardiac arrest during class, March 20. He returned to class a week later.

SLIPPERY ROCK, Pa. - "I'll Be There For You" is the theme song to Frantzi Schaub's favorite television show, "Friends." The junior theatre major at Slippery Rock University was even wearing a "Friends" sweatshirt when his heart stopped during his acting class. But thanks to his friends — and few new ones working as first responders — Schaub is alive today because people were there for him.

"It's crazy to think I died and someone was there to give me a second chance," said Schaub, a resident of Slippery Rock who was born in Haiti and raised in Beaver Falls.

Schaub now wears a replacement "Friends" sweatshirt because his previous hoodie was extracted after he went into cardiac arrest March 20 at the Maltby Center theater, two days before he had surgery to insert an implantable cardioverter defibrillator into his heart.

He lived to tell the story, but he doesn't remember much. Not to worry, the bystanders and first responders were available to fill in the gaps for him.

"We were in the middle of an acting exercise," said David Skeele, SRU professor of theatre who was teaching the Michael Chekhov Technique known as "Radiating and Receiving" to 10 students in his acting class. "I asked everyone to come up on stage and I looked around and one of the students was on the floor, kind of writhing there and making an awful sound. I thought the student was getting caught up in the acting exercise."

Skeele said students were imagining they were characters generating energy in a chaotic way, and although it involved light aerobic activity, the exercise was certainly little threat to anyone with a healthy heart.

"Frantzi runs down the aisle and just collapses," said Samantha Dyer, a sophomore dual major in biology and theatre from Corry. "And he's extremely dramatic as it is, so we all thought he was just doing his thing. I peeked around the corner and saw that his hand was all cramped up, which meant oxygen wasn't reaching his brain. I ran to him and saw that he wasn't waking up."

Another student in the class, Samantha Balaj, a junior exercise science major from Akron, Ohio, was trained in first aid and CPR. She called University Police from her cell phone, telling the dispatcher: "There's an unconscious student in Maltby, we need help."

"(Balaj) threw her phone at me so she could start CPR on him," Dyer continued. "At first we were thinking seizure, so we rolled him onto his side and we realized he didn't have a pulse. So we rolled him back and she started CPR while I talked to the police officers and updated them on everything that was going on."

Spc. Tyler Gray, who was training Officer Guerino Cararini, took the call and dispatched Officers Trevor Buckley and Wayne Cochran. Buckley, who was just starting his shift and was at his desk, was the first to arrive after driving the 0.4 miles on Keister Road and Campus Drive with lights and sirens blazing, an automated external defibrillator by his side.

"Upon exiting the vehicle, I started undoing the pads on the AED while running into Maltby," said Buckley, who according to dispatch reports arrived at 3:01 p.m. "I could hear on our radio that dispatch was still on the phone and they said the unconscious male still wasn't breathing. I relied on my training and had the pads ready to go."

Meanwhile, Balaj, who despite her training had never performed CPR in a real emergency, was completing her second set of 30 chest compressions, between which she attempted rescue breathing.

"She would push the air in and you could tell that she was struggling, but he would reject it," Dyer recalled. "That was the most terrifying thing in my entire life."

Buckley rounded the corner and ordered Balaj to remove Schaub's shirt before he placed the pads down and turned on the AED and started another 30 compressions.

"Then the AED said 'Shock advise, everyone stand clear,'" said Buckley, who previously used an AED but never in an instance that required a shock. "I pressed the shock and his body had a major reaction to it; it seemed like he jumped four feet in the air."

Buckley performed 90 compressions in all before he was relieved by Cochran, who by then arrived and used a mask with a one-way valve to administered two rescue breaths.

"I could tell that the breaths were getting in because I could see his chest going up and coming back down," Buckley said. "At some point, after the two breaths, we noticed the valve was starting to push back, like his body was trying to breath. That's when we stopped and moved away."

The valve in Schaub's mouth started to fog up; he was responsive and alive.

At 3:08 p.m., seven minutes after Buckley arrived, first responders from Slippery Rock Volunteer Fire Company, EMS and Lt. Brian Hoak of the Slippery Rock Borough Police had arrived. By 3:16 p.m., Schaub was en route to Grove City Medical Center, before he was transported later that evening to UPMC Presbyterian Medical Center in Pittsburgh, where he was diagnosed with hypertrophic cardiomyopathy.

HCM, a common cause of sudden cardiac arrest in young people, occurs when heart muscle cells enlarge and cause the walls of the ventricles to thicken. Schaub, who had no previous known heart problems, had surgery two days later and was discharged a day after surgery. He returned to class the following Monday, six days after the incident. Several students and Skeele, who arranged a phone chain for updates following the incident, visited Schaub, who also credits his friend, Erica Robbins, for helping him during his recovery. Although there is no "cure" for Schaub's condition, he is expected to fully recover and live a normal life with his implanted defibrillator.

While students in the class were offered counseling by the SRU Student Counseling Center, even during the incident, which happened across the street from the SCC, Schaub's return a week later was surreal.

"It was traumatic for everyone and it took a couple of class periods to be able to get back into our groove," Skeele said. "We talked about it. He was joking a lot about it as his way of dealing with it, but some people were in a state of shock."

"I walked in and said, 'I'm back.' They didn't clap, but whatever," said Schaub, cracking a smile as if recalling a scene from his favorite episode of "Friends." "I feel like it was more traumatizing for them than it was for me because I don't remember anything. They had to watch all that."

Earlier this week, Schaub sat down with Buckley, whom he never met (consciously, at least), Balaj and Dyer to recall what happened and thank them.

"I don't have too many words to describe it; I'm just thankful," Schaub said. "It's cool to be able to see (the people) who brought me back to life. I owe them my life."

"In my opinion, (Balaj) was the biggest hero in the class because she started CPR on him and kept him alive until the (first responders) got there," Skeele said. "(Dyer) was really good and got University Police on the phone and stayed on with them until everyone got there. Among all the responders, they all got there really quickly and were highly competent and knew exactly what they were doing. They were so calm, quick and efficient. I admire the way all of them dealt with it."

"No one is trying to take sole credit for anything," Buckley said. "It was an entire team effort all the way. Everyone was professional, quick and relied on the training. I don't want to say it was routine or part of the job — that's kind of cliché — but at the same time it is what you're trained to do and you have to prepared for anything at any time."

"I appreciated things beforehand but I have a much different outlook on everything now," said Schaub, who has a "five-year plan," with a list of places to see, including New York, Las Vegas and California, while pursuing a career in the performing arts. "I'd love to be on Broadway or work in film or stage music; it doesn't matter, as long as I'm performing."

Schaub is prepared to play the lead role in his life story, with plenty more "radiating and receiving" in his future.

"I thought I had a good story before; this just adds to it," Schaub said.