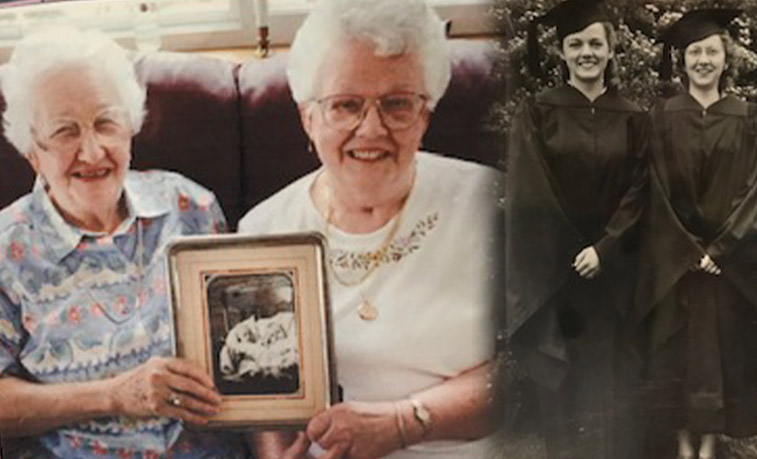 From left, Opal McCarl (far right in 1943) and Olive Miller (second from right in 1943) are the first set of twins among Slippery Rock University’s alumni to celebrate their 100th birthdays.

SLIPPERY ROCK, Pa. — The Doublemint Twins first appeared in chewing gum advertisements in 1939, the same year another set of twin sisters arrived as students at what is now Slippery Rock University. Today, those two SRU alumnae are newly minted in a triple-figure age group, as twin sisters Olive Miller and Opal McCarl, from the SRU Class of 1943, are celebrating their 100th birthday, April 21.

Miller and McCarl, who graduated from what was then Slippery Rock State Teachers College with degrees in education, have joined a small group of living SRU alumni who are centenarians.

"We've occasionally had alumni who celebrated 100th birthdays, but this is the first time we've had twins," said Kelly Bailey, SRU director of alumni engagement. "This is a wonderful milestone and we wish Olive and Opal a happy birthday from all of us in the SRU community."

When contacted by phone from the nursing home where she lives in Franklin, Miller was asked how she felt about turning 100.

Miller would go on to reflect on her life as a teacher. She taught one year at county school in Slippery Rock and five years at an Irwin Township "country school," before teaching 28 years in the Franklin Area School District. She retired in 1982.

"We lived on a farm in Butler County and Opal and I both went to Slippery Rock and taught in country schools," Miller said. "I loved being a teacher and working with children."

McCarl followed a similar path, teaching briefly in Coraopolis and Grove City, before a 30-year career as a teacher in the Mercer Area School District.

Two of seven children raised by Thomas and Carrie (Critchlow) Gilchrist, Miller and McCarl grew up in Marion Township, near Harrisville. They followed in their mother's footsteps, as Carrie graduated from Slippery Rock Normal School in 1910. Miller, who married Cliff Miller in August 1941, was among the first SRU students to attend the school while married and she had to obtain special permission to exceed her curfew to visit her husband.

"My sister and I and another friend stayed with some of the ladies in town who housed students," McCarl said. "They fixed up a kitchen in their basement and we'd cook our own meals down there and walk to class. My father had four of us in college at the time, so we did everything as inexpensively as we could."

Asked about her memories of the University, McCarl recalled two things that would seem strange to current SRU students.

"The first thing that struck your attention was the chapel," said McCarl, referring to one of the three original campus buildings that stood at the terminus of Morrow Way (near North Hall and present-day Weisenfluh Dining Hall) until the 1970s. "Old Main was there but we had classes and orientation in the chapel. I belonged to the Rifle Club and we had our target practice in the basement of the chapel."

McCarl now lives in Myrtle Beach, South Carolina, near her daughter, Joan Dudek, and sons, Camden and Don McCarl. She's celebrating her birthday by having dinner with her children and their families.

McCarl and Miller haven't been together since McCarl moved to South Carolina in 2015 but they communicate regularly. Miller will be celebrating in the nursing home and her daughter, Sue Hovis, said she plans to mark the occasion by providing several gifts, including a scrapbook and cupcakes, as well as a pillow, shirt, sash and crown with messages such as "100 and fabulous" and "100 years loved."

Unfortunately, because of COVID-19 restrictions, the family cannot enter the facility to visit but they see each other through a glass door and through FaceTime videoconferencing.

Hovis, who earned degrees from SRU in counseling services (1971) and elementary education (1968), and her son, Josh Hovis, a 1999 graduate with a degree in communication, complete four generations of Miller's family who graduated from SRU. Miller's husband, Cliff, who died in 2015, was also an SRU alumnus (1938). In addition to Sue, Miller also has a son, Larry Miller.

When each of the twin sisters were asked the secrets to their longevity, Miller credited her mother, Carrie, who lived until she was 102 and was a stickler for education. McCarl, meanwhile, offered this: "People are always saying to be careful of your diet and your habits and to not drink (alcohol)," McCarl said. "I don't really know if there's anything I could say that would help, but I'd say to be very temperate."