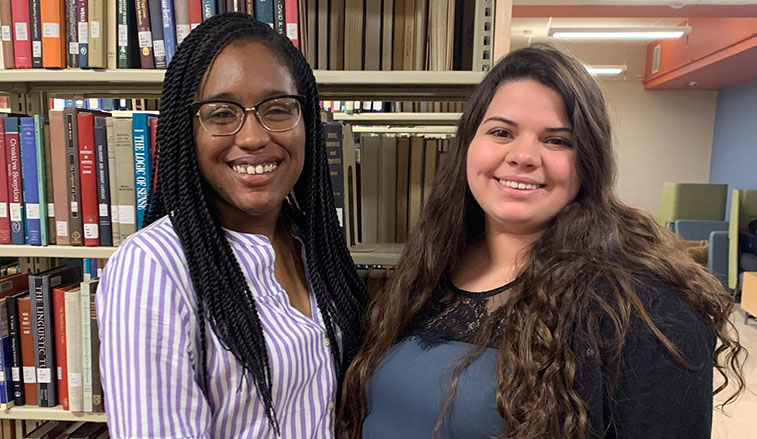 From left, Niyah Pope, a senior early childhood and special education major from Turtle Creek, and Cynthia Rush, a sophomore criminology major from Bentleyville, are the recipients of the 2019 Marjorie Stephenson Scholarship.

SLIPPERY ROCK, Pa. — Although Marjorie Stephenson a former professor and librarian no longer works at Slippery Rock University, her influence is still felt today through a scholarship awarded in her honor.

Originally a scholarship for African-American women majoring in library science, the Marjorie Stephenson Scholarship is now awarded to any full-time undergraduate student with special consideration given to underrepresented female students pursuing a degree in the arts, humanities, social sciences or education.

Recipients of the 2019 award are Niyah Pope, a senior early childhood and special education major from Turtle Creek, and Cynthia Rush, a sophomore criminology major from Bentleyville.

Rush, who serves as a Jumpstart mentor in the Office for Inclusive Excellence, was encouraged to apply for the scholarship by her supervisor, Amber Hamilton, assistant director of student transition programs. Hamilton thought Rush's strong work ethic and academic success would provide her with a solid opportunity for consideration.

"(Receiving the scholarship) means a lot because it helps me further my education," said Rush who one days hopes to work for the federal government doing intelligence work or at an American embassy. "I would really like to immerse myself in a different culture."

Pope is a two-time recipient, having also been awarded the scholarship in 2017. "This scholarship not only helps with the financial burden associated with obtaining a college education, but allows me to focus on my goals of expanding the representation of African-American women as teachers into elementary classrooms.

"In my life, I've probably only had three African-American teachers. And in particular, African-American children need to see more role models that look like them or their parents whether it's a teacher, lawyer or doctor. They don't get to see that that often and they might not aspire to fill those roles themselves if they don't see it firsthand. They might not be actively thinking about such things that at that age, but it can be discouraging, possibly detrimental, if they aren't exposed to such role-models.

"A lot of research says that children, particularly African-American children, don't really have the same resources available to them due to variables such as their socioeconomic status. While I still would like to become a teacher, I would also like to own my own childcare center and make it affordable for single-parent families and low-income families in order to give children that boost that they may not normally receive."

To qualify for the endowed scholarship, awarded as partial or full for as much as $1,000 per recipient, applicants must have earned at least 30 semester hours at SRU and be enrolled full time. They must also complete an essay explaining how their college education helps them pursue their career goals and submit letters of recommendation from two SRU faculty members, one of who has taught them in a class.

The Stephenson Scholarship committee, consisting of current and retired Bailey Library staff and other interdisciplinary faculty and staff, uses a rubric that takes into account financial need, academic performance and campus activities to select award recipients.

"While both of the recipients have earned stellar grades, this is not an academic scholarship," said Alison Brungard, co-chair of the scholarship selection committee and Bailey Library's STEM and electronic access librarian. "These ladies exemplify the best of SRU and the spirit of the scholarship for which (Marjorie) intended.

"Niyah and Cynthia are both civic-minded and actively engaged on campus, as well out in the community. Niyah is particularly passionate about her work with the Black Action Society and her professors call her a natural leader. Cynthia is a Jump Start mentor, serves on the University Program Board and was also the catalyst for a travel abroad course that is being offered this summer by the Department of Criminology and Criminal Justice.

"As a selection committee, we were fortunate to review essays and letters of recommendation from many qualified applicants, which makes the selection process that much more difficult, but it's a good problem to have. With Niyah and Cynthia, we are confident that we have selected the best of the best."

For more information about the Stephenson Scholarship, contact Brungard at: 724.738.2638 or allison.brungard@sru.edu.