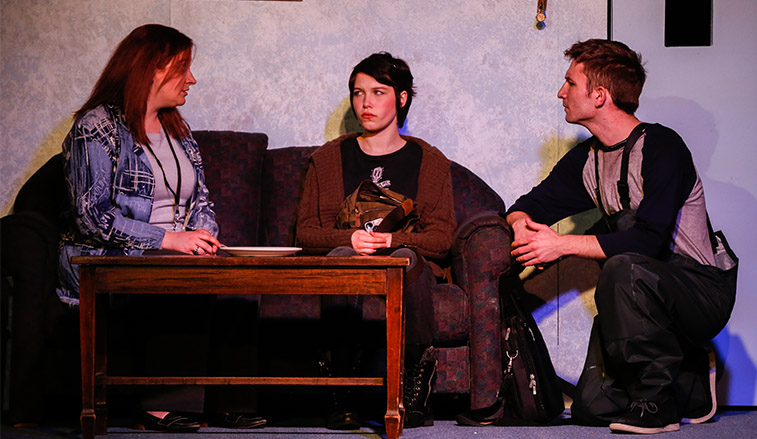 SLIPPERY ROCK, Pa. — Slippery Rock University Theatre will be navigating through the hardships of drug addiction and the foster care system in the story of "Luna Gale" with performances at 7:30 p.m., April 26-27 and April 30-May 2. A 2 p.m. matinee is scheduled for April 28. All performances will take place in the University Union Multipurpose Room.

Written by Rebecca Gilman, an American playwright, "Luna Gale" follows Caroline, a veteran social worker, as she handles the case of Peter and Karlie, two teenage drug addicts accused of neglecting their baby, Luna Gale. A family conflict is sparked once the infant is placed in the care of Karlie's mother, forcing Caroline to make a risky decision with potentially disastrous consequences.

"This is a powerful play about negotiating addiction and the foster care system," said Laura Smiley, an associate professor of theatre and director of "Luna Gale." "It's a social commentary on the brokenness of the foster care system and how sometimes you're constrained by the law even if you have the best of intentions."

Smiley, who saw the play as an educational opportunity for her students to learn about the prevalence of drug addiction and the struggles of those suffering from it, invited an officer of the court and former drug user to speak with the cast and crew.

"This play came my way and I have two very personal experiences with people who suffer from addiction," said Smiley. "This made the production very special to me and I thought, 'I have to do this play.' I want my students to experience all the difficulties and challenges of this crisis. Facing addiction is a very difficult thing and I think we don't consider what a struggle it is for addicts to find their way on the path to recovery."

After having the opportunity to listen to real-life stories, Smiley and the students are eager to address and "discuss" the issue with audience members through their performances.

"I've learned so much about dealing and battling with addiction and the social work system. Our encounter was eye opening," said Kristina Streno, a senior theatre major from Eighty Four who plays Caroline. "I feel that unless you've been exposed to something like this, and really speak with those suffering from addiction, you really have no idea the impact addiction has on a person's life.

"Meeting and speaking with people affected by addiction was very informative and will allow us, as actors, to stage a play that describes that downward spiral that is drug addiction, but within the context of the foster care system and the barriers the system can place on an individual as well."

Tickets are $12 for general admission and $10 for SRU students. A "Community Night" admission of $10 for all attendees is scheduled for the April 28 performance.