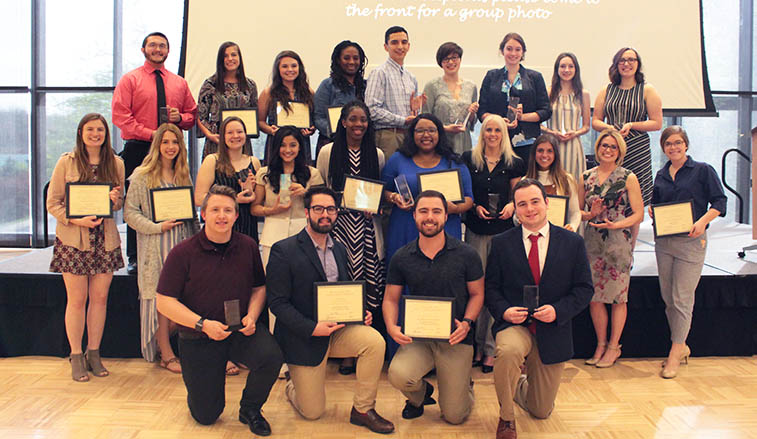 SLIPPERY ROCK, Pa. — The stars may shine big and bright deep in the heart of Texas but Slippery Rock University gave the Lone Star state a run for its money April 24 in the Smith Student Center Ballroom when it recognized outstanding students and groups at the 2018-19 "Rising Star Ceremony."

The Rising Star awards, sponsored by AVI Fresh, the University's contract food vendor, and SRU's Office of Student Engagement and Leadership, are presented to students that influence positive change, inspire peers, faculty and professional staff and effectively delegate, communicate and empower organization's members. Recipients were recognized for their ability to balance academic life with leadership opportunities and stand out within their organizations. Each recipient received a certificate naming their star and a map showing where their star is located.

Rising Star Awards were also presented in the Student Leader of the Year, Student Community Service and the Silent Inspiration categories.

Kennedy Moore, a senior resort, recreation and hospitality management major from Braddock, was named SRU's Student Leader of the Year at the event, which also recognized a number of University organizations for their programming and campus and community service.

Moore is involved in a variety of student organizations at SRU including Student Government Association, Green and White Society, Black Action Society and NAACP. She also serves on the President's Commission on Race and Ethnic Diversity, is a Jump Start peer mentor and served as a moderator for various campus town hall meeting and panel discussions.

Shrija Shrestha, a senior public health major from Sarlahi, Nepal, was named the Student Community Service winner. Shrestha is a student worker at the Women's and Pride Centers, works as a HOPE Peer Educator, is a chemistry tutor, is the founder and president of the UNICEF chapter at SRU, and serves as the vice president of SUMA. The UNICEF chapter at SRU, which was the first in Pennsylvania's State System of Higher Education, helps to raise awareness about the struggles and difficulties faced by children in underdeveloped countries.

Adam Weissert, a senior computing major from Elysburg, was presented with the Silent Inspiration Award, which is given to an SRU student who has served his or her organization in an unassuming and quiet manner. The award is for a student who has not yet been in a leadership role, but through a commitment of time and energy has made an impact on the organization and the University community. As the treasurer for the Film Society at SRU, Weissert has helped strengthen the organization's finances while also assisting in the planning of various excursions to film festivals throughout the semester and directing several successful fundraisers.

Keshia Booker, assistant director of multicultural development, received the Student Organization Adviser of the Year Award, which is given to the adviser who goes beyond the required duties of the position and provides consistent service and guidance to the students in their organization while serving as a role model.

A number of awards were presented to campus organizations, including:

• Student Organization of the Year: Theta Chi Fraternity for "providing countless leadership opportunities for undergraduates of all ages both in a social and educational setting. The fraternity's new and improved pledge process consists of eight lessons incorporating professionalism, educating college students on subjects of mental health, drug and alcohol abuse, and safety on and off campus." During the academic year the fraternity completed more than 300 hours of community service and raised $400 for the United Service Organization.
• Outstanding Cultural Event Award: Slippery Rock Student Government Association for "Community Café," an event that "provided students with an opportunity to have an open conversation focused on the question 'What would SRU be as a more racially diverse campus?' The event provided an opportunity for students on campus to understand and engage in conversation about diversity and advocating for underrepresented, minoritized and marginalized people."
• Service Project Award: SRSGA and Green and White Society for "The Big Event." The award recognizes an event's attempt to increase the knowledge of, and opportunity to, participate in community service involvement of SRU students.
• Collaborative Event Award: University Program Board, the Gender Studies Program, the Frederick Douglas Institute and the Office for Inclusive Excellence for guest speaker Keke Palmer.
• Entertainment Event Award: University Program Board for the Simple Plan concert.
• Educational Event Award: Theta Chi Fraternity for "Stop the Bleed" and "SAVE." "Stop the Bleed" was a training session presented by UPMC staffers to educate attendees on the proper way to aid a bleeding victim during an emergency. "SAVE" was an educational event to discuss ways to spot suicidal behavior and how to address someone attendees believed were contemplating self-harm.
• Residence Life Event Award: Building A community advisers for "Murder Mystery." The event was set up as a live action version of the game "Clue" with each CA portraying a different character. Through detailed planning and partnering, residents worked together to uncover clues and expose the "murderer."
• Living Learning Community of the Year: Rock Life LLC for "making a positive impact on SRU's campus by allowing students to more tangibly take leadership of their living environment ... and creating students who authentically care about each other, SRU and their community."