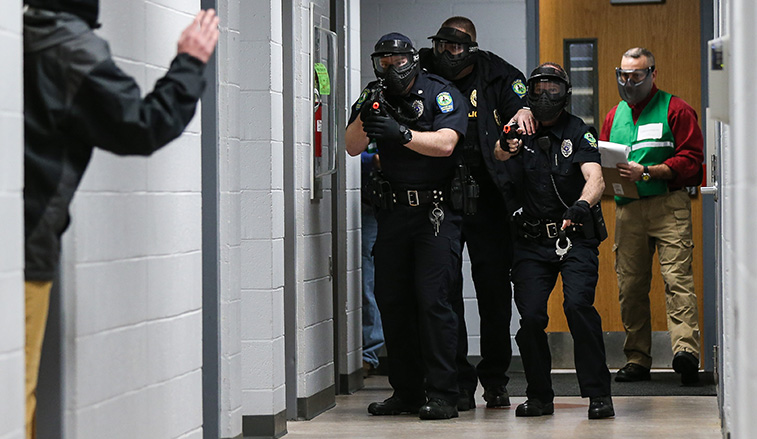 Slippery Rock University’s Department of Environmental Health and Safety is collecting feedback from the University regarding the April 19 emergency drill in which the SRU campus was put on lockdown during a simulated active shooter incident. Feedback will be used to identify areas for emergency preparedness improvement.

SLIPPERY ROCK, Pa. - Although an "All Clear" alert was issued to indicate the conclusion of an April 19 emergency drill at Slippery Rock University, efforts to keep the campus safe and assess the University's emergency preparedness will continue.

"We met our goals and objectives to increase awareness and participation, so from an overall sense the drill experience went well," said Paul Novak, executive director of planning and environmental, health and safety. "Nevertheless, there is opportunity for improvement and that's why we drill and why we wanted to engage as much of the campus community and as many stakeholders as we could." 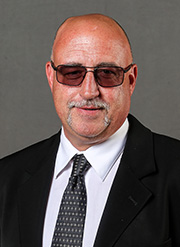 SRU's Department of Environmental Health and Safety conducted a post-incident evaluation the day after the drill, but feedback from reviewers of the event is still being compiled and assessed. EHS will host an open forum for the campus community at 12:30 p.m., April 26 in the Smith Student Center, Room 322, to discuss concerns, answer questions and continue to spread awareness.

EHS has also created an email address, emergencymanagement@sru.edu, that people can use to submit their feedback and ask questions related to the emergency drill and the University's emergency preparedness.

"The officers responded well and we were well-prepared," said Chief Mike Simmons, University Police, who chose the four responding officers based on the number typically available during a daylight shift. "Most of these situations happen quickly and are over quickly, so we tried to make it as realistic as possible and tried to keep it as unscripted as possible as far as their response and their encounter with the perpetrator. We constantly train so this is another opportunity to take the training and put it to practical use."

Following months of planning and notification to the campus community, SRU was put on lockdown for approximately 37 minutes as part of the drill. The campus was notified through a series of four alerts, through text messages and emails, with instructions and updates from e2Campus, the University's emergency notification system.

"We chose this scenario to capture as many types of situations as we could and present them to emergency responders to allow them to practice," Novak said. "We had great cooperation from everyone involved."

A variety of community stakeholders also participated, including Slippery Rock Borough Fire Department, EMS and Police, while more than 20 "reviewers" wearing vests observed and documented how different campus units responded. There were also "injects" used, in which selected people on campus where presented with scenarios and questions as part of the drill to acknowledge a gap or to see how they would respond.

"The next step is to take all those lessons learned, identify any gaps and incorporate that into the next emergency preparedness initiative," said Novak, who indicated that one lesson learned was the importance of communication.

SRU conducted a table-top exercise for emergency preparedness in 2016, before conducting drills each of the last two years. According to Novak, there will be future all-campus drills as well as smaller-scale drills for individual departments that will be conducted on an ongoing basis, beginning with the Criminology and Security Studies Department and the Safety Management Department, early next month.

Additional drills and training will incorporate practices used by the National Incident Management System, a comprehensive, national approach to incident management that is applicable at all jurisdictional levels and across functional disciplines. According to Novak, faculty and staff will be offered NIMS training through modules provided by the Federal Emergency Management Agency.

In addition to the first-responder units, Novak commended the efforts of Windy Stafford, SRU assistant director of emergency management, for organizing the drill, as well as the faculty, staff and students who participated as reviewers and role players, some of which acted out the panic responses of victims and bystanders.