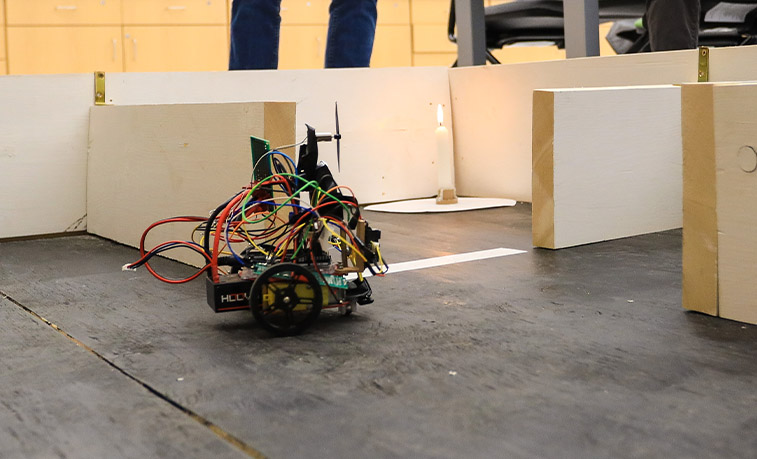 Robots built and programmed by Slippery Rock University students in an Introduction to Electrical Engineering class navigate a 6-foot-by-6 maze of wooden planks to find a lit candle to extinguish with a fan.

SLIPPERY ROCK, Pa. — Students in an electrical engineering class at Slippery Rock University are becoming less robotic in their learning by building robots from scratch. A semester-long project that combines several skills could have involved memorizing inputs and outputs of circuitry and computer code to program robots, but humans learning differently. A better approach is through competition and hands-on experiences.

"This project has been very useful because it's information that I'll remember," said Tanae Williams, a junior mechanical engineering major from Slippery Rock. "Instead of sitting in a class and trying to remember information for a test, I'll remember the coding we did to program the robots for a long time."

Working in small groups, the students built robots in SRU's engineering lab to perform three tasks throughout the semester. First, they programmed the robots to dance, and then they deployed them to navigate a 6-by-6-foot maze of wooden planks, having them enter and exit four "rooms" from a center hallway. Finally, as a culminating challenge that replicated a task of a fire-fighting robot, the robots were programmed to enter rooms of the maze to find a lit candle and extinguish the flame with a tiny fan. 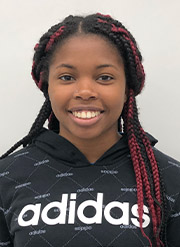 "As an engineer, you have to learn how to build something, and that's what this class teaches," said Sagar Bhandari, assistant professor of physics and engineering, who teaches the 300-level, Introduction to Electrical Engineering course. "In a computer science class, you might program equipment that you buy, or take data from it, but you don't touch the circuits because (the device) works. But here, you are building the whole circuit. You might have an advanced piece of machinery with all these different sensors and actuators. There are so many issues that you might have to fix, and this project teaches students how to figure out how a robot works and it gives them a sense of accomplishment from building it."

Students are provided wires, circuits, wheels and other equipment to build around small Arduino computers, which are open-source electronics that come with software that makes it easy for someone to write code and upload it to a board. Arduino computers, according to the company's website, sense their environments by receiving inputs from many sensors, and affects their surroundings by controlling lights, motors and other actuators. The sensors can detect the distance between an object, such as the walls in a maze, or, using infrared sensors, the presence of heat from a flame.

"We're all given the same materials, but it's up to us to make whatever we want to do to with it," said Zachary Hanlon, a sophomore mechanical engineering major from Oakmont. "We all work together in some sense, but there are changes per group based on how we want to place these the wires and connect them to the circuits."

Each group custom built their robots, some using parts from a 3-D printer, and gave them a name. Bhandari developed a scoring system for each round of task, figuring in time, if the objective was completed and if the robot returned to its starting point.

"There's a lot of competition, but there's also camaraderie, and that's what makes it fun," said Hanlon, whose group named their robot "Little Boty." "Dr. Bhandari does a great a job getting us involved and he's been able to teach us a lot about electrical circuits and coding.

"I'm into music and I'd like to work (in my career) with guitar pedals and amplifiers, and this was the first class that I've taken that will prepare me for that. I've started learning basic circuitry and doing circuit diagrams. It's been really helpful." 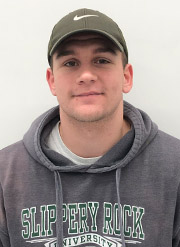 Little Boty was one of two robots in the class to blow out multiple candles during the exercise, including one pass that took just 22 seconds. Some of the robots got stuck in a corner or just knocked the candles over. Bhandari said that students weren't graded on whether or not the robots completed the task but how well students were able to solve issues and identify why the robot succeeded or failed. Each group had to write a report for each task and give a presentation at the end of the semester.

"Students might have a fear of programming and circuits and building something, so this encourages them and gives them confidence that they can actually do it," Bhandari said. "Normally, in engineering or physics classes, there's a lot of theory, homework and exams and it's difficult to remember everything six months later. But how to program a robot, students will remember this."

"We're developing the skills needed to put all the pieces together," Williams said. "We had to write the code to make the robot dance and make the sensors work to make the robot move along the wall and around the corners and everything came together (for the final task)."

Williams joked that her team's robot, "Roberto," was working great with the code they developed, but when it came to the competition, it was under too much pressure.

Apparently, even emotions prevail in a class that is seemingly based on electrical circuits, computing and logic.

"Some of the students don't want to disassemble the robot because they have this emotional connection with it," Bhandari said with amused laughter.

More information about SRU's engineering programs is available on the School of Engineering webpage. 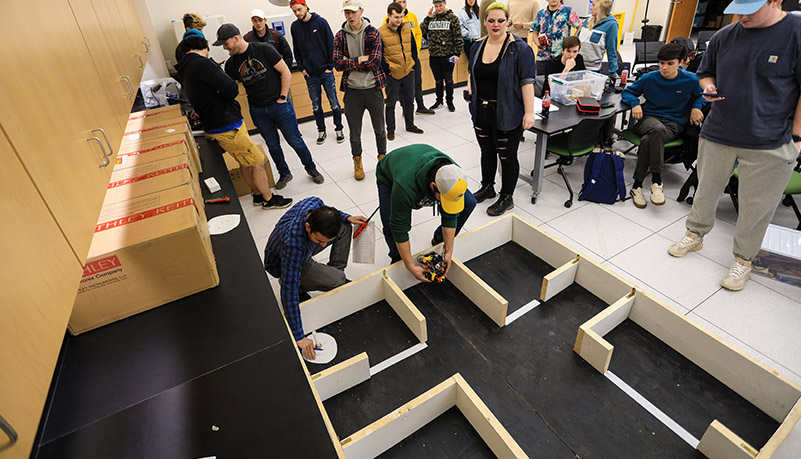 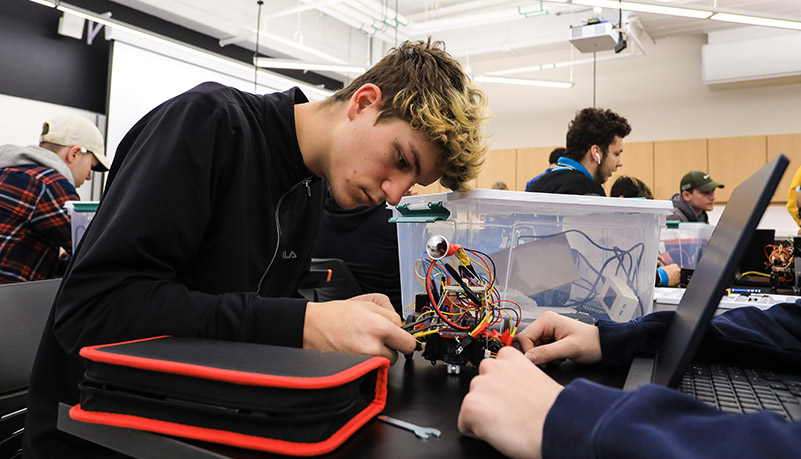 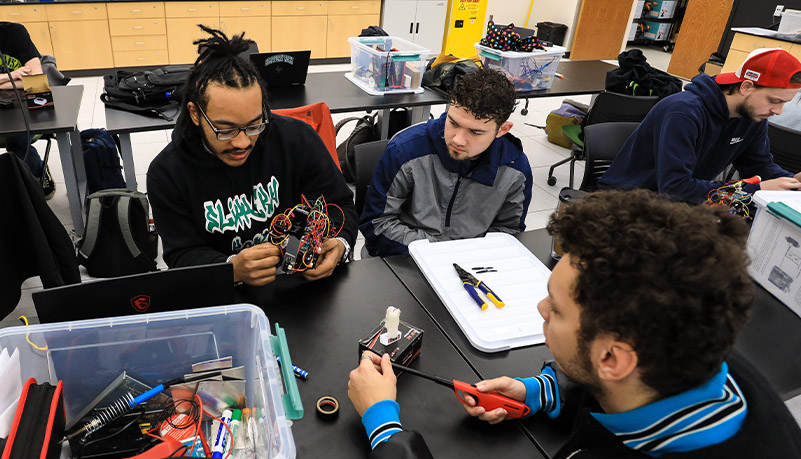 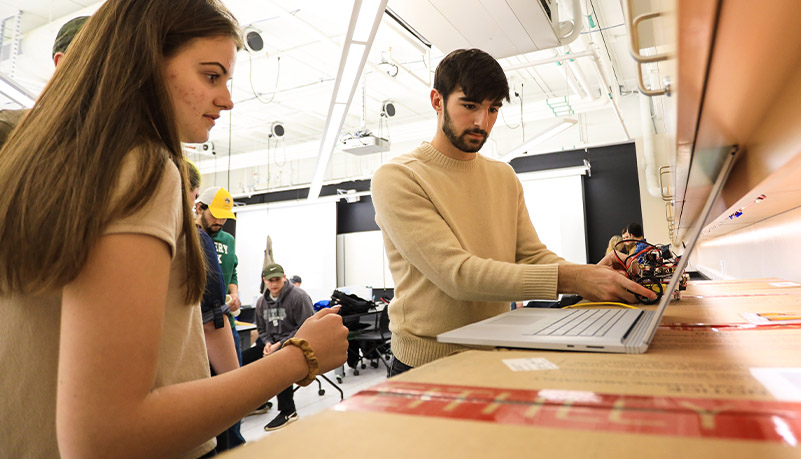 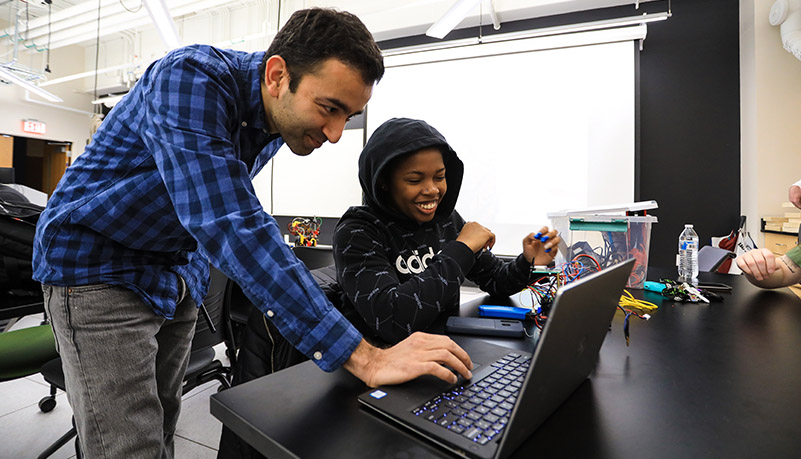