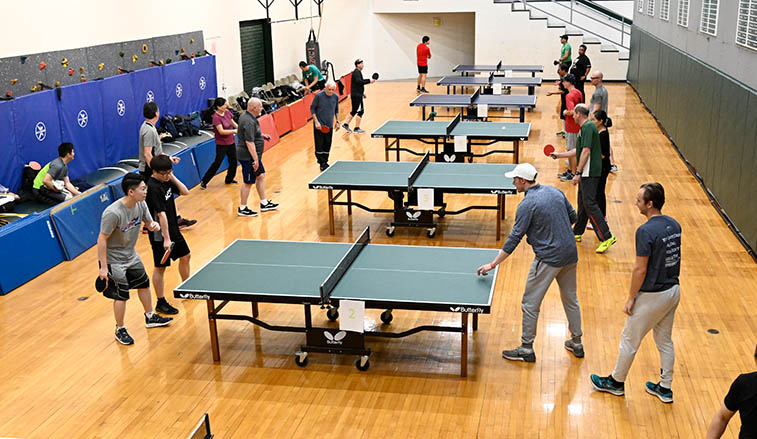 Members of the table tennis clubs at Slippery Rock University, which included students, University employees and community members, participated in a research project that was presented at the International Table Tennis Federation Sports Science Congress.

SLIPPERY ROCK, Pa. — When Istvan Kovacs was 11 years old he watched the Hungarian national table tennis team upset perennial powerhouse China in the world championships. His appreciation of the sport only grew when his father set up a table for him and friends to learn from the players they watched on television. Forty years later, Kovacs is still fascinated with the sport.

Kovacs, a Slippery Rock University assistant professor of physical and health education, returned to his native Hungary earlier this month as the only American presenter at the International Table Tennis Federation Sports Science Congress, which took place in Budapest in conjunction with the ITTF World Tennis Table Championships. The congress was attended by more than 150 scholars, scientists and coaches seeking to advance the sport of table tennis through research in areas related to everything from exercise physiology and sports psychology to coaching techniques and game play strategies

His path home to Hungary took several turns. In a younger life he competed as a triple jumper for the Hungarian national team. He then became an American citizen and joined the SRU faculty 15 years ago. After starting club teams at SRU six years ago for students, faculty, staff and community members, Kovacs began conducting research with his club players that recently caught the attention of the international table tennis community. Thus the invite to the ITTFSSC.

"(Attendees) were very interested in my presentation because I'm from America and it included information they haven't seen before," said Kovacs, one of more than 50 presenters at the event. "The conference was great because I could meet the top scientists in the sport of table tennis."

Having practiced with his club team players at SRU twice a week, Kovacs wanted to measure the skills of typical amateur players and how much they could improve.

"The first question I asked is, 'What is the spin rate and hitting speed of an amateur player?,' because there had been no published research about that that I could find," said Kovacs, who earned a doctorate in biomechanics from Eotvos University Budapest. "Most scientists are focused on the top-level international players."

Kovacs then wanted to find out how much a player could improve in an amateur club setting, without personal coaching or without dedicating a lot of time practicing a particular skill. In his players' case, that meant only two, 20-minute sessions per week for eight weeks.

"Table tennis is a highly skilled sport that requires a combination of hitting with spin, speed and accuracy," Kovacs said. "The spinning ball requires a lot of thinking by the opponent because the spin on the ball will affect the outcome on the player's paddle. The incoming ball has more topspin and rotation and it's going to bound upward and can easily go long. If there's backward rotation, then it'll be hit downward toward the net. If the player can vary the amount of spin, that will cause major difficulties for returning the ball accurately because the opposing player always has to read how much spin is put on the ball that's coming toward them."

Kovacs identified the forehand loop-drive, a commonly used table tennis shot using top spin, as a skill to analyze. He already had willing research participants. The Table Tennis Club at SRU, along with the community club team, practice for two hours twice a week at Morrow Field House and have a combined 25 members, 13 of whom would participate in the study and provide Kovacs a sample of players of varying age and skill level.

"I've been thinking about researching table tennis since after we started the club, but two years ago I had phenomenal students who really wanted to dive in and investigate," Kovacs said. "So, we applied for a grant to purchase equipment."

Austin McClinton, a senior health and physical education major from Beaver Falls, and Catherine Rauenzahn, a 2018 graduate with a degree in health and physical education, were on board to help collect and analyze data. McClinton had previously worked with Kovacs on research measuring upper body strength, and despite not being much of a table tennis player, he saw the opportunity to expand his range of research and enhance his candidacy for graduate-school.

"This has broadened my horizon, showing that I'm not (a researcher in) just strength and conditioning," McClinton said. "I can get into biomechanics and self-regulated learning and how to develop protocols. I was interested in using the cameras and the paddles to study the forehand loop and learn the complexities and precision of the game.

Kovacs received a $5,000 Faculty-Student Research Grant from SRU to purchase equipment necessary to both deliver a consistent shot to a player and measure the speed and spin of the players' returned shot. A robot called the Butterfly Amicus Advanced served balls with backspin and in each session a player had to successfully return five consecutive shots using a forehand loop. Researchers used a high-speed recorder to capture video of the returned shots at 480 frames per second.

The participants practiced the forehand loop twice a week without formal coaching, but they could seek advice and instructional materials for what the researchers referred to as "self-regulated feedback."

"Most importantly, we looked at the improvement rate for eight weeks," Kovacs said. "In terms of spin rate, our participants improved 46 percent and in speed they improved 13 percent. I was expecting improvement, but we found a couple interesting things like the spin rate was a gradual improvement, almost linear, on a biweekly basis. The speed improved in the first four weeks and then it remained at that level for the rest of the study. They realized they couldn't hit it any faster because they'd miss the table. They started developing more spin in the second half of the study from week four to week eight."

The results have helped to inform the table tennis community and support the idea that people can take up the sport and improve quickly.

"This was the first study that provided numbers for amateur, recreational players of a wider age group," said Kovacs, whose participants ages ranged from 18-year-old college students to 60-year-old retirees. "You can pick up the sport at any age and improve significantly and if you're paying attention to technique, even without professional coaching, you can improve on the mechanical outcome of your shots, which makes you a better player."

The research won't stop here. Kovacs wants to pursue studies analyzing the cardio fitness effects of table tennis for senior populations. He's also interested in doing work with elite players and helping form a scientific committee for table tennis in the United States. Many countries have scientific table tennis committees, in addition to committees that develop the sport in other areas including youth participation, but the U.S. does not have one. His timing is right on. The U.S. is hosting the ITTF World Championships in 2021 in Houston, which will be the first time that a country in North America will host the biennially event in its 95-year history.

"I'm motivated even more after attending the congress (this year)," Kovacs said. "I want to find more people interested in this research (in the U.S.) and bring them together at the next congress in Houston."