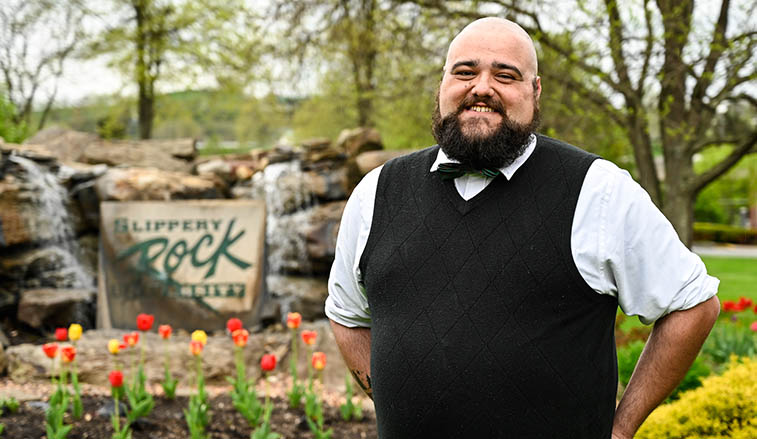 SLIPPERY ROCK, Pa. — When Andrew Young walks across the stage at Slippery Rock University's commencement ceremony, the 28-year-old senior from Beaver Falls will complete a journey that was fraught with obstacles that were invisible to others but difficult to overcome. His journey, aided by the support of the SRU community, resulted in a triumph of self-discovery.

"Slippery Rock University provided me with an avenue where I now know who I am, I know who's in my corner, and what I'm capable of doing in the future," said Young, who will receive his bachelor's degree in social work, May 11, at one of SRU's two undergraduate commencement ceremonies at Morrow Field House. "The SRU community was accepting and very welcoming and surrounded me with the people that I needed to grow and prosper."

Young's route to SRU began like many other adult students. He first earned an associate's degree from the Community College of Beaver County in 2011 and then spent the next five years toiling away at various jobs, doing everything from auto parts sales to cooking in a restaurant, in order to save tuition money and secure a student loan in pursuit of a bachelor's degree. He was working at the Beaver Valley Power Station before enrolling in SRU's social work program for the 2016 spring semester.

"All I ever wanted to do with my life was to help other people live theirs," Young said. "Helping people is where my heart lies."

However, it would be Young who would need help first. Initially, he lived alone in an off-campus apartment in Slippery Rock and worked as a cook at North Country Brewing Company. A coworker he befriended at NCBC connected him with the Kappa Sigma fraternity which he pledged during his first semester.

"(The Kappa Sigma brothers) had something I didn't have: they were confident and I started to think that there was more to me than I thought there was," said Young.. "They welcomed me as one of their own and there was no judgment. I was free to be who I wanted to be. They introduced me to myself."

"We accepted him just like he was one of us," said Mack Shearer, a senior health science-public health major from Sharpsville and Kappa Sigma brother. "We laughed about him being a lot older than us, but sometimes it's nice just knowing you have people 30 and older who are there for you and you can talk to. Their shared experiences can help you."

Young, who had been previously diagnosed with bipolar disorder and was on antidepressants and mood stabilizers since he was 18, found himself tired all the time, and during the fall 2016 semester the pulmonologist he was seeing for sleep apnea suspected that he was suffering from another sleep disorder. To seek further treatment and tests, Young had to stop taking his antidepressants.

"(Stopping the medication) really messed me up," said Young, who was diagnosed with narcolepsy, a disorder that caused him extreme fatigue, difficulty staying awake for long periods of time and disruptions to his daily routine. "My friends were with me every step of the way, but I lost some time with school work, which led to me dropping out. I thought, 'That was it,' and I was not coming back."

Despite withdrawing from SRU during the fall 2016 semester, Young was shepherded through reenrolling the next semester by what was then the University's Retention Office. Now, the withdrawal process is handled through SRU's Office of Inclusive Excellence, which employs a team of student success coaches. Young would also register with the Office of Disability Services to get additional support for his condition and he saw a psychiatrist at the Student Counseling Center.

"Without them, I hate to even think about where I'd be; I'd have squandered a lot of potential," said Young, who also relied on his fraternity brothers who helped him move out of his apartment and provided him with Kappa Sigma credos that stuck with him like, "Whatever you do, do well, and may success attend your efforts."

"I knew I could do so much more and that my time at SRU wasn't over," Young said. "I reenrolled in the spring and every semester after that I had at least a 3.75 GPA because being there, especially in the (Kappa Sigma) fraternity, inspired me to do better and be the best I can be."

"All of our chapters create a strong community of support, but Kappa Sigma is known for the support they give brothers who are going through a hard time," said Jayne Piskorik, assistant director for fraternity/sorority life and student organizations in SRU's Office of Student Engagement and Leadership. "They look out for each other because they feel a strong bond. When it comes to mental health, they provide resources for their brothers, so it's become a care network for them, and they are a strong chapter because of that."

"We (typically) think of persons who are older than ourselves to have already figured certain things out," Shearer said. "But we're really all in the same boat (and regardless of age), we figure things out in our own time. At times, age just isn't a factor as much as experience is."

The following academic year, 2017-18, everything seemed to click, Young said. He developed more friendships and became known around campus as "Tiny," an ironic nickname because of his size. "I'm 6 foot, 300 pounds," he said. But his mental health issues still plagued him. Originally planning to graduate in 2018 upon completion of a summer internship with Butler Health System's Palliative Care Services, Young said his goodbyes to his friends and was preparing for life after SRU.

Young's social work internship with PCS was not a typical one for an SRU undergraduate. The type of work, supporting patients with terminal or life-altering diagnosis, and their families, was usually reserved for graduate-level interns, but Young was considered a high achiever and more mature than other undergraduates.

"Andrew is a very analytical thinker; he's been able to make connections between theory and practice and has done extremely well in the program," said Thomas Bechard, assistant professor of public health and social work. "He was a model for the rest of the students, bringing maturity, critical thinking and collaboration to help other students."

However, his medication for narcolepsy and bipolar disorder made him manic. As such, he was not retaining information and was experiencing a variety of symptoms including dizziness. Coupled with the transitional stress of meeting with dozens of patients who died during the time of his internship, Young suffered a nervous breakdown in the summer of 2018 and admitted himself to the psychiatric ward at Heritage Valley Health System in Beaver.

"I just wanted to get my medication straightened out and I knew that was the quickest way to do it," said Young, who spent only one day in the ward. "I got out and everything was so clear and lucid, but (my internship supervisors) decided it was not safe for me to go back (to work) and I wasn't able to finish on time."

Young returned to SRU that fall, picked up a minor, and remained active with his fraternity, but then sustained an injury playing intramural flag football, developed costal chondritis, which is inflammation of the cartilage in his chest, and from that, pneumonia. For the second time in two years, he was forced to withdraw from the University.

Still undeterred, Young returned for the spring 2019 semester to complete his unfinished internship, this time at the Grove City Medical Center's Transitional Care Center, running assessments of patients who were transitioning from hospital stays to home or to assisted-care facilities and nursing homes.

"His insight into his illness (made him successful)," Bechard said. "Our University and our program are set up to accommodate changes that may be going on with the student and continually support them. Also, the way we've designed our social work program, the strong working relationships between the (internship) supervisor and our office are extremely important. That relationship is the underpinning of all the students, but occasionally when a student runs into problems, together we can support a transition or change the goals of the internship."

Young fulfilled his 480 internship hours and was immediately hired full time as a case worker for Allegheny County's Children, Youth & Families agency in Pittsburgh. Despite his on-going training, which will continue through July, his role with CYF is to provide child protective services, meet with families to help them keep their children, ensure a child's safety and well-being, and see that a stable and/or permanent environment is being provided. In other words, he'll be doing what he enjoys most: helping people.

"It's everything I could have wanted," said Young, who now lives in an apartment in Moon Township and has mastered control of his health conditions through medication and drug-free treatments likes meditating. "Every day I wake up happy, hungry and humble."

He credits the support from SRU, both socially and academically, in achieving his success.

"I'm thriving here and doing better than people in my training class because of the education I received at SRU," Young said. "It was so comprehensive and relevant to this profession. Also, having that social support and community are huge for the transitioning college student. It's about finding who you are and that's key to being successful."