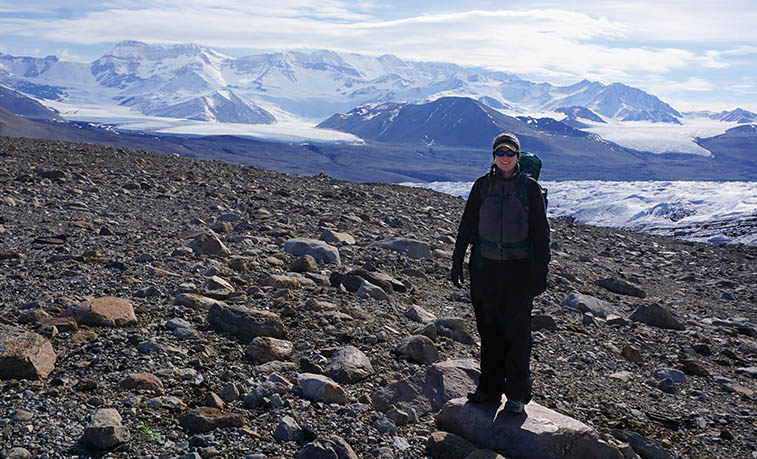 Maraina Miles, a 2018 Slippery Rock University graduate with a degree in environmental science-geology, recently completed a two-month research expedition in Antarctica as part of her graduate school studies at the University of Maine.

SLIPPERY ROCK, Pa. — Maraina Miles has a name befitting of a geology researcher. She studies moraines, which are rock formations deposited by glaciers and a near homophone of her first name. Miles also racks up miles, as in the 10 per day she hiked during an expedition in Antarctica, where she and three other researchers covered areas where few humans, if any, have ever set foot.

"In some places there were maybe three groups of people who passed through there ... ever," said Miles, a 2018 Slippery Rock University graduate with a degree in environmental science-geology. "It's a lot to process. It was really great because I could read about all these glacial features in textbooks and then I got out of a helicopter and it was all right there in front of me."

As a graduate student at the University of Maine, Miles completed two months of field research in Antarctica, Dec. 24 to Feb. 20. She recently racked up more miles to visit SRU to share her experiences with students in a geomorphology class. Geomorphology is the study of the physical features of the Earth's surface.

Miles' research centers on glacial behavior and predicting the stability of the Antarctic Ice Sheet in response to global warming. The AIS is the largest single mass of ice on Earth and covers approximately 98 percent of the Antarctic continent. Miles homed in on exposed rock deposits from the Walcott Glacier, which is located in the Royal Society Range of the Transantarctic Mountains, to reconstruct the past behavior of the glacier. The research collected will inform how the AIS will respond to future warming.

"We were trying to figure out what it looked like when the glaciers receded at the end of the last Ice Age, about 18,000 years ago," said Miles, who is pursuing her master's degree in earth and climate sciences at UMaine. "There were really old deposits with boulders that have been there a million years. I have such a small piece of the puzzle, but (overall) we're trying to figure out what future sea-level rise would be, how much ice would be flowing out and where it would be coming from, because what happened last time (the ice receded) could happen next time."

Miles measured the levels of beryllium on deposits to estimate the time a rock has been exposed on the surface, and where there is a series of rocks, the researchers can map the rate at which the glacier retreats. Beryllium is a rare chemical element that is produced by exposure to cosmic rays.

Antarctica is a treasure trove for geology researchers, "because no one has been there to mess it up," Miles said. The rock formations are undisturbed with no rainfall or vegetation and the continent is virtually uninhabitable due to year-round subfreezing temperatures. Miles and her research team were there during the summer months when temperatures were between 15-25 degrees Fahrenheit. "But it felt much colder because of the Hurricane-force, katabatic winds that rush high-density air down from the elevated slopes," said Miles.

Another unique feature of the excursion was that the entire research team was comprised entirely of women, including: Brenda Hall, the supervising professor; Tess Walther, a fellow graduate student; and Laura Mattas, an undergraduate student. They stayed in three tents, two people per tent with one tent for cooking, for five straight weeks at three sites. A helicopter would occasionally arrive to drop off supplies and pick up the hundreds of pounds of rock samples they collected.

"It was like extreme 'glamping,'" said Miles, using the term for glamorous camping with modern amenities. "We had comfortable mattresses and a cooler of frozen vegetables and we ate really well. The biggest challenge was just being responsible for the possibility of hypothermia and understanding when you're getting too cold."

They only encountered one other group while in the field, researchers who were using a nearby stream for water, "but they didn't even bother to say 'hi,'" Miles said with a laugh.

Miles' path to becoming a geologist had an unconventional start. She studied sculpture and graduated with a Bachelor of Fine Arts from Indiana University of Pennsylvania in 2013. She then worked as a "gardener/janitor" at the National Aviary in Pittsburgh for two years before enrolling at SRU to pursue her second bachelor's degree, this time in environmental science-geology.

"I know I wanted to go back to school for something related to the environment," said Miles, who was recommended to the SRU program by her boyfriend, and now fiancé, Aaron Lefebvre, a 2010 SRU graduate with a degree in English. "It was a need to get out and learn more. I just missed learning."

Miles excelled at SRU and conducted extensive field research through an independent study analyzing records and samples from the Badlands in South Dakota to determine climate conditions from thousands of years ago. Miles credits the research experience she gained at SRU for helping her get into graduate school and preparing her for the work she conducted in Antarctica.

"Maraina has demonstrated the very best of how an SRU education can propel a career," said Patrick Burkhart, professor of geography, geology and environment, who invited Miles back to campus to speak to his geomorphology class. "As an undergraduate, she completed doctoral-caliber research. A few years ago she had a dream of being a glacial geologist and now she is making that dream come true in graduate school. She had that dream and she realized she had to go for it and she is."

After she obtains her master's degree, Miles plans to pursue a doctoral degree and become a professor.

"I had some really great professors at SRU and I recognize how import it is to pass down information," Miles said.