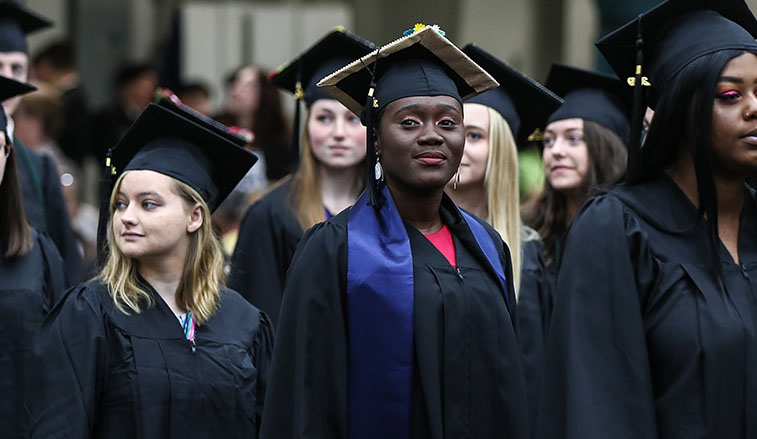 Shakelah Harrigan, center, a 2019 Slippery Rock University graduate with a degree in psychology, transferred to SRU following the devastation in her own country, the British Virgin Islands, from the 2017 Hurricanes Irma and Maria.

SLIPPERY ROCK, Pa. — Like many college seniors, Shakelah Harrigan experienced the stress of final exams and the relief of graduating, all in one week. But none of the more than 1,700 graduates at Slippery Rock University's three commencement ceremonies May 10-11 had been through multiple schools and the eye of a hurricane to earn a degree.

Let's call it triumph over tragedy.

Harrigan, a native of the British Virgin Islands, transferred to SRU following her withdrawal from the University of the Virgin Islands as a result of Hurricanes Irma and Maria.

At the beginning of her sophomore year, Harrigan was evacuated from her dormitory at UVI a week before Hurricane Irma hit, Sept. 6, 2017. She returned home to her family in Tortola, BVI, the largest island in the British chain that was also devastated by the Category 5 storm that produced 150 mph winds. There were a reported four deaths, and 90 percent of all homes and businesses in the BVI were destroyed

"It was an experience," Harrigan said, nodding slowly as if acknowledging her understatement. "We went to sleep and when we woke up everything was destroyed, literally."

In the months after the hurricane, Harrigan and some of her siblings stayed with an aunt. They didn't have electricity for months and had to get water pumped from cisterns. Her mother, Karen Vanterpool, is a police officer and often was not home as she was assisting with recovery efforts.

Although UVI eventually reopened, Harrigan decided to transfer to SRU for the start of the spring 2018 semester on the recommendation of her sister, Akelah Hughes, a senior early childhood-special education major who was living in Slippery Rock and attended SRU at the time the storm hit.

The move to SRU was anything but smooth as Harrigan faced many challenges en route to earning her bachelor's degree in psychology.

First, she had to locate her previous academic adviser to get the appropriate paperwork completed to transfer her credits, which came from two institutions, UVI and H. Lavity Stoutt Community College in the BVI. Then, she had to get authorized for an F1 visa to study in the U.S. as a non-citizen. Those steps accomplished, there was the small matter of having to meet new people, make friends and adapt to a completely new environment. Not the least of which were the cold Slippery Rock winters, which gave Harrigan shivers just thinking about, even during finals week in the spring. Fortunately, she had the support of the SRU community and found a confidant in Genevieve Bordogna, associate director of international enrollment management, who works in the University's Office for Global Engagement.

"There were times I was in (Genevieve's) office crying because I was like, 'I don't know what I'm going to do,'" Harrigan said. "Especially coming from something that traumatized me so much. I'd often tell her that I didn't know if I could make it. She would reassure me and make me feel that I could do this and that I'd already been through worse. That kept me going."

"It's easy for students to allow the not-so-bright-side of things to consume them," Bordogna said. "We helped her focus on what we can control and worked toward the next step and said, 'You're going to graduate; you're going to do it,' and she did it."

Harrigan's mother was able to get time off work and travel to SRU to witness her daughter's graduation.

"I can't believe I'm at this point where I can say that I've completed something that I wanted to get done for so long," said Harrigan, who managed to complete her degree in three years despite missing an entire semester because of the hurricane. "It's wild and it's like, 'Is this really happening?'"

"(SRU is) a very nice place and I've met some amazing people," Harrigan said. "They helped me with the entire transition and I'm forever grateful to them because I know I would not have made it if it weren't for their support and them making me feel comfortable. (I had) some uncertainty, but I persevered."

Although she is still awaiting approval of her Employment Authorization Document to legally work in the U.S. as a non-citizen, Harrigan has been hired to be a counselor at the Rotary Camp for Children's with Special Needs, a program run by the Akron YMCA in Ohio. She eventually wants to return to the BVI and work as a guidance counselor in the school system or as a social worker.

"(What can be learned from her story) is that if you believe in yourself, you can persevere," Bordogna said. "(It's about knowing) what you're capable of and to know that there are people here that you can lean on. SRU is a caring community and she experienced that, not just with our office but all across campus."