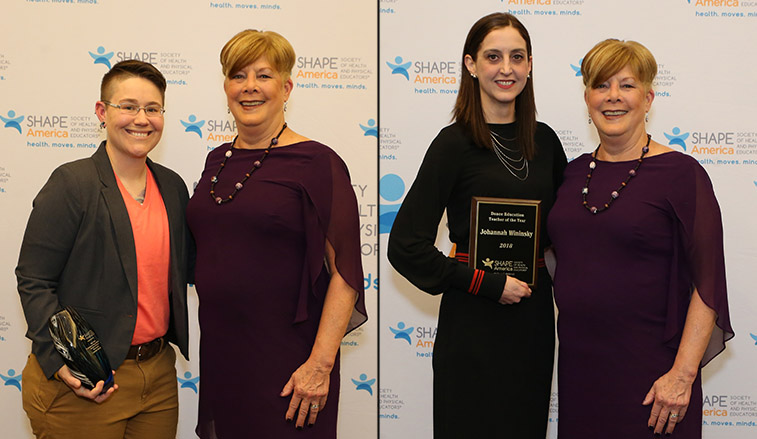 SLIPPERY ROCK, Pa. - Two of the nation's top six health and physical education teachers have something in common other than just the National Teacher of the Awards they received earlier this spring: they also have degrees from Slippery Rock University.

Neither Duff nor Wininsky was aware that the other honoree shared the same alma mater until Duff mentioned SRU in her acceptance speech.

"I was like, 'Whoa, that's a coincidence,'" said Wininsky, who afterward approached Duff and they reminisced about SRU and discussed their appreciation for the same dance professor, the late Thom Cobb.

"It was really neat and fun to have someone from the same, relatively small school recognized alongside me," Duff said.

Wininsky and Duff's names weren't simply picked out of a hat. Both went through extensive reviews by SHAPE America committees that reviewed and advanced them from the state and district levels before they were interviewed by a national panel that reviewed a 20-minute recording of one of their classroom lessons.

In Duff's lesson she used leaf blowers, pulley systems and catapults to help special-needs students participate in sports such as javelin, golf and curling.

"You name it, we did it," said Duff, an adapted physical education teacher at Cedar Lane School, a public, state-funded day school in Fulton, Maryland, for students with disabilities, ranging in ages 3-21. "I get to build equipment for my students who otherwise would be unable to access sports and activities. My students can kick a ball if they're in a wheelchair or throw if their arms have limited movement."

Duff's work with students with significant cognitive and physical disabilities, considered low incidence disabilities, was profiled on the Golf Channel, a story that was narrated by Tim Shriver, chairman of the Special Olympics.

Wininsky, a dance teacher at New Trier High School in Winnetka, Illinois, advocates for physical activity and helps students reach their capabilities in a different way, through dance and creative expression.

"I just enjoy working with kids and I enjoy seeing how dance and a connection to their bodies really boosts their confidence levels," Wininsky said. "(Dancing and physical activity) helps with stress and anxiety and allows them to express themselves in ways that their words sometimes can't say for them."

Nearly 500 of New Trier's 4,000 students take dance classes for their physical education requirement. Wininsky is one of five dance teachers in a program that includes live musical accompaniment.

"I'm focused on the artistic form of dance and the fact that it's a physical activity is just an added benefit," Wininsky said. "I always stress to my kids that being physically active is a great way to relieve stress."

Both Duff and Wininsky attribute their success to their SRU education, particularly from faculty support.

"I know I wouldn't be where I am if not for SRU," said Duff, who nearly left the University due to personal adversity she faced during her time as a student-teacher. "I went through some hard times with student-teaching and the faculty and staff at SRU really stuck with me and didn't let me give up. They believed in me. That's what I hold with me as a teacher now, to believe in your students the way that (SRU) believed in me."

"There are so many things I loved about my experience (at SRU)," Wininsky said. "I made a lot of great friends and I was challenged in so many ways to think outside of the box, choreographically and creatively. I always felt challenged and supported by the faculty. SRU really instilled in me a shift in mindset in believing in myself and that my artistic voice is important and unique. I try to instill that in my students as well."

Click here for more information about SHAPE America's Teacher of the Year awards.