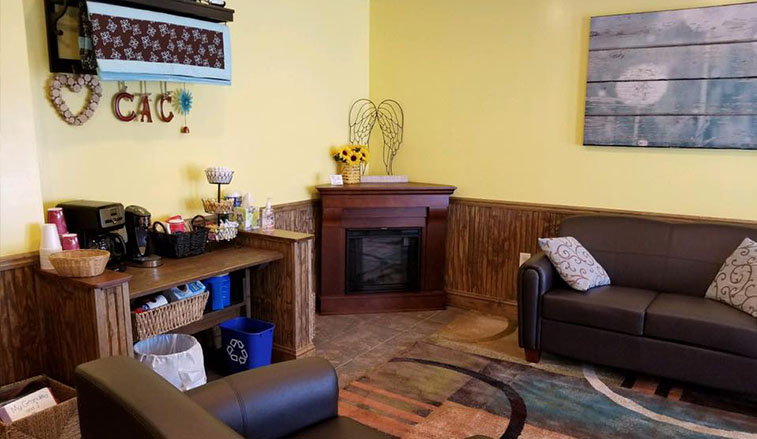 The Butler County Alliance for Children is in need of a larger facility to serve victims of sexual assault, said its executive director, Denna Hays, a Slippery Rock University instructor of social work and 1996 SRU graduate.

SLIPPERY ROCK, Pa. — When Cathy Burnheimer dropped off popcorn for a fundraising event hosted by the Butler County Alliance for Children last year, she walked away deeply saddened but committed to doing more. The child advocacy center, located in Butler, helps victims of sexual assault. Denna Hays, a Slippery Rock University instructor of social work, runs the center. Burnheimer and Hays were classmates and graduated from The Rock in 1996.

"I have such a deep respect for what Denna has devoted her life to," said Burnheimer, who graduated with a degree in communication and currently operates an online-order gourmet popcorn business called Popped Envy. "As a mother of three daughters, (sexual assault) is one of the scariest things that could happen to one of my children. I got choked up after touring the center and hearing what Denna does on a daily basis. You know (sexual assault) happens but, my gosh ... it was at that point I knew I needed to do something big for her."

It was just a matter of waiting for the right opportunity.

That opportunity presented itself last month when Burnheimer witnessed the affinity and support SRU students and alumni showed for the University after daytime talk-show host Phil McGraw gave an interview to People.com regarding the current college admissions scandal. In explaining his take on the situation, McGraw, better known as Dr. Phil, opined that the accused parents weren't really shopping for an education, but rather they were looking for status. He noted, "They don't want to say, 'My kid's going to the junior college.' They want to say, 'My kid's going to Harvard; my kid's going to USC or Yale.' I think it's bragging rights for them and they don't want to be the one parent that says, 'Well, yeah, my kid's going to, like, Slippery Rock.'" 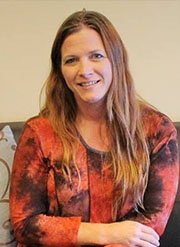 McGraw's remarks prompted Burnheimer - along with more than 1,000 others - to respond to Dr. Phil's comments on SRU's Facebook page, telling him in part: "As a 1996 graduate of this fine university, I loved my time there. I was very active academically and socially. I especially loved being a member of Alpha Omicron Pi fraternity. The education I received at Slippery Rock provided me a solid foundation to run two Pittsburgh Area businesses and will be launching a third this year. My successful cake business, Frosted Envy, led me to win 'Winner Cake All' on the Food Network, and now I run my equally as successful gourmet popcorn business, Popped Envy. As you have discovered, SRU alumni are like family. We support each other in business and in life. I have been blessed to have a successful career, yet I never forget where I came from, and who has helped me along the way."

That "support for each other" inspired Burnheimer to launch a fundraising campaign to support Hays' efforts doing what she does best - popping corn. During the month of May she is donating 30% of her popcorn sales to BCAC when customers submit an online order at poppedenvy.com and use the promotion code "ROCKPRIDE."

"It's amazing that (Cathy) thought about us," said Hays, who graduated with a degree in social work and was Burnheimer's Alpha Omicron Pi sorority sister. "She learned what we do and realized our need and was willing to take a step to help us. We are so busy and we're growing so quickly that it is difficult for us to get out and solicit donors."

BCAC, a non-profit agency that opened in 2014, serves nearly 350 children annually by conducting forensic interviews and coordinating medical examinations of children who are victims of sexual assaults. Families are referred to the center by people involved with the investigative process, such as local law enforcement and social services agencies like Children & Youth Services, so that services are not duplicated and are conducted in a manner that's beneficial to the children.

"Children come to our center versus having to go to each of the other investigative offices," said Hays, who leads a staff of three other employees as BCAC's executive director, in addition to teaching social work classes part-time at SRU since 2017. "(The children) just come here and (investigators and medical providers) come to them. Having the center increases information sharing among the investigators so that there is better decision-making and it's less traumatic for the families."

The BCAC staff conducts interviews, which are video recorded and can be observed by investigators from a separate room. The center also contracts with doctors to conduct forensic medical examinations. However, the 2,000-square-foot facility, located at 1015 East Jefferson Street in Butler, consists of only two interview rooms and a waiting room for families, in addition to the space for investigators, staff and video equipment.

"We need a much larger facility," said Hays, whose center can see upwards of 20 clients per week. "Even when we identify more service needs we can't offer them because our center is too small. There's unlimited potential to do more if we had more space than we have right now."

BCAC serves all of Butler County but mostly take referrals from only seven of the county's 25 police departments because of its limited capacity.

Burnheimer hopes to help raise $1 million for BCAC, not just through the campaign but also by soliciting people to donate directly to the BCAC via their website.

"My goal is to get people to donate in any capacity, whether through my business or directly through the Alliance," Burnheimer said. "It's about helping these kids and getting (BCAC) into a bigger facility so they can help more children."

Burnheimer has a track record of making the most of her opportunities. She taught herself to bake cakes 14 years ago and grew a successful business out of her Butler County home called Frosted Envy. She and her partner, Lesley Polinko Wasielewski, won the $10,000 top prize last year on an episode of The Food Network's "Winner Cake All." The victory aside, Burnheimer has since put her cake business on hold, dedicating most of her time to Popped Envy, which has a production facility in Sarver and specializes in selling allergy-friendly, gourmet popcorn online. Flavors range from Bacon N Cheese to Lemon Pound Cake to White Cheddar. The menu board currently includes 43 flavors, including vegan and Kosher options. With one in 15 children struggling with food allergies and limited snack options, Burnheimer says Popped Envy's delicious, allergy friendly popcorn hits the spot. The company works with nonprofits to provide excellent product for fundraisers for organizations, offering them a 50% profit margin.

Hays said donations, whether through Popped Envy or directly through the BCAC website, are not the only way people can help BCAC.

"Anything helps," said Hays, who has a wish list of items published on the center's website that people can donate. The list includes everything from office supplies and toilet paper to snacks for kids. "Any of those things are important. People get intimidated and think they don't have the money to donate. It doesn't always have to be money. We are grateful for other items as well."

For more information about the BCAC, including a link to donate, click here, or contact Hays at: 724.431.3689 or dhays@butlercountycac.org. To order from Popped Envy, click here, and don't forget to put ROCKPRIDE in the promotion code.