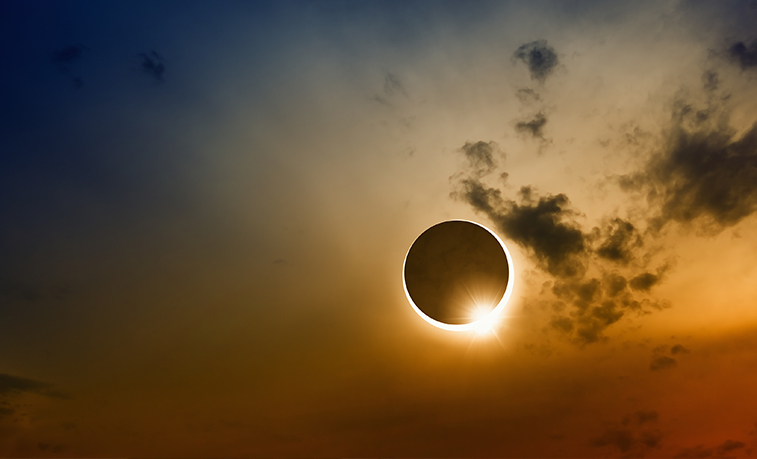 One hundred years ago, May 29, 1919, Albert Einstein’s general theory of relativity was confirmed by the scientific community thanks to observations made during a total solar eclipse.

SLIPPERY ROCK, Pa. — An experimental test that occurred 100 years ago changed the way scientists look at the forces of nature. A total solar eclipse, which occurred May 29, 1919, helped scientists prove Albert Einstein's general theory of relativity, superseding Sir Isaac Newton's laws of motion related to gravity and the belief that light travels in a straight line. Two theories that were universally accepted for the previous 230 years.

"Einstein's theory was a big departure from what scientists previously thought about forces, and this was his most revolutionary idea," said Athula Herat, Slippery Rock University associate professor of physics and engineering, who teaches courses in mathematical physics and quantum mechanics. "Until then, every other force we knew in nature had a way that we described it accurately."

Prior to 1919, Einstein was a little-known German physicist who theorized that light from another star should be bent by the sun's gravity. Einstein predicted that space's three dimensions -- height, width and depth -- and time, form a four-dimensional continuum called "spacetime." In 1915, Einstein published his general theory of relativity in which massive objects warp spacetime after affects other matter. 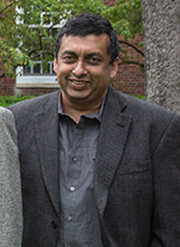 According to Herat, this explanation of gravity was radically different from how scientists understood all other types of forces.

Herat demonstrated this concept by placing two marbles on a piece of paper and lifting up the page from his desk with his hands on opposite sides of the paper. The paper represented spacetime and the marbles any mass such as the sun or a planet. The masses were attracted to one another, rolling to the center of the page because the paper, or spacetime, is warped. Light would also bend and follow the path of the warped spacetime, but in the early 1900s there was no way to observe this phenomenon and the only viable option was to observe light bending around massive objects, such as the sun, causing it to act like a lens. This effect known as gravitational lensing enables scientists to see stars that are hidden behind the sun.

"We needed the right event," Herat said. "The problem was the sun's light was so bright we couldn't observe faint starlight bending around the sun. Now, because of modern technology, we can see far into space and detect the faintest celestial objects, but in the early 1900s we just had normal telescopes and plate photography to capture light. We had to have the right event to capture the phenomenon and that happened May 29, 1919. That was the day of a total solar eclipse."

Sir Arthur Eddington, a British astrophysicist, led an experiment proposed by Sir Frank Watson Dyson to observe light from the Hyades star cluster bending as it passed the sun's gravitational field. The Royal Astronomical Society organized two scientific expeditions to two locations where the total eclipse was visible, one at an island off the west coast of Africa and the other in northern Brazil.

"Einstein was known in the scientific circles for his revolutionary theories, but this observation made him a superstar," Herat said. "This was the starting point that propelled him into cultural icon with his crazy hair and famous quotes."

To Newton's credit, his calculations led scientists to predict that a particle traveling at the speed of light would be deflected by the sun's gravity, but only at 0.86 arcseconds, which is the angle made by a right triangle one inch wide and 1.9 miles high. Einstein correctly predicted that the light would bend at 1.75 arcseconds, which may seem like a minuscule difference but in proportion to the vast distance from the Earth to the sun, doubling the arcseconds compounds a significant gap in calculations.

"It's a profound difference for a theory like this," Herat said. "Newton predicted some amount of deflection, but this was much bigger. Gravity is the weakest of the forces we know of, and you need a large mass to make an observable difference, even bigger than the sun. Now we measure the curvature not from the sun but from looking at how light is bent by an entire galaxy containing billions of stars in it."

Observing the bending of light around massive objects is an important consideration in the study of astrophysics, helping scientists understand things like black holes, dark matter and the expansion of the universe. While there aren't many commercial benefits to this observation, Herat said there is one everyday benefit to Einstein's theory that people use daily: GPS.

The GPS system is based on an array of 24 satellites orbiting the earth, each carrying a precise atomic clock. Using a hand-held GPS receiver which detects signals from any of the satellites that happen to be overhead, mobile device users can determine latitude, longitude and altitude to find their intended destination, whether it be a new restaurant, grandma's new condo or checking the location of someone's last Snapchat.

Herat also points out another historically significant aspect of the observations from the 1919 solar eclipse, which occurred just months after the end of World War I, a conflict that pitted Germany and other Central Powers in Europe against Allies that included Great Britain.

"You had a British group that verified the work of a German scientist," Herat said. "That may have had an impact on how people looked at the collaborative nature of science. There could be wars between nations, but scientists still work together because the truth prevails. That made this even more of an iconic moment."