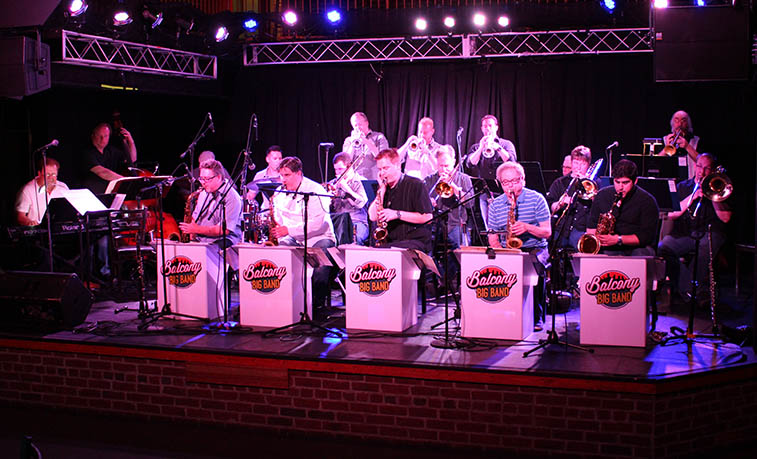 SLIPPERY ROCK, Pa. — The Balcony Big Band - or at least its heart, its music charts - was literally on its way to the landfill when it was serendipitously saved in one of those "you can't make this stuff up" stories.

"It's one of the more bizarre stories I've ever heard about a jazz band," said David Glover, SRU associate professor of music, who teaches Jazz History at the University and is the BBB's drummer.

The term "big band" is used to describe a genre of music, popularized during the swing era in the 1930s and '40s, played by a large jazz ensemble, usually consisting of more than 10 musicians and full saxophone, trumpet, trombone and rhythm sections.

The sheet music played by the 18-member Balcony Big Band not only appears as if it predates the band's inception in 1988, but even the swing era entirely. That's because the BBB's original collection of sheet music, that it still uses for shows, has endured fire and water damage and coffee stains that make it look like ancient scrolls.

Musicians typically keep the same charts for years because of the cost and inconvenience to make copies, but the BBB's printed notes took a beating for a vagabond big band that rotated venues nearly as often as its cadre of members. The crates of the band's original sheet music was exposed to musty storage closets at night clubs, one that was damaged by fire, and was later salvaged from curbside trash collection one morning more than a decade ago when the now ex-wife of the group's founder attempted to dispose of it.

"The collection is priceless because there are so many tunes in those books. There are hundreds of compositions and if you were to buy them on their own - if they are still in print, which many are not - it would cost $40 or $50 each. Some books look like they are from the 1800s on parchment paper with burnt edges. Many are almost illegible," Glover said.

The man credited for resurrecting the BBB was once its most dedicated audience member. Joe Herndon, a 2000 SRU graduate with a degree in music education, started going to BBB shows in 1995 when the band played at its namesake, The Balcony, a venue in Pittsburgh's Shadyside neighborhood that emulated New York City's upscale supper clubs. It hosted big bands on Monday nights, in the big-band tradition.

"I would beg, borrow or steal to get from Slippery Rock to Pittsburgh to hear this band," said Herndon, who would go every Monday night for the 9 p.m. to midnight show. "I was young and starry-eyed and I said if I could be in this band someday, then I would have made it as a musician."

Two years later, in 1997, The Balcony closed, leaving the band without a place to play. They would bounce around to different clubs in Pittsburgh, Foster's in the Oakland Holiday Inn, James Street Café and the Chapel of Blues, before reaching a coda, or at least an indefinite rest note, in 2003.

"It was difficult for big bands," said Glover, who sat in on drums for a few shows at the Chapel of Blues, home to the BBB from 2002-03. "One place after another would have the band and then it would close."

Herndon, also a member of a Pittsburgh salsa band called Azucar, played at Dowe's on 9th, another now defunct Pittsburgh jazz club that was a brief home for the BBB. That's where he was first invited to sit in with the BBB when its founder, H.B. Bennett, needed a trumpet player.

"I became friends with the guys in the band and that was instrumental in starting my career as a professional freelance musician," said Herndon, who now supplements his freelance gigs by teaching lessons. "You get to know people and here's this guy who comes every week and pays attention, so I went and played and they were happy and I started getting called back."

Not long after the BBB disbanded, Bennett moved to North Carolina with his then-wife, and during his transition the band's sheet music found its way to the trash at a home in Gibsonia, a suburb of Pittsburgh. A neighbor noticed the collection on the curb, with folders embossed "BIG BALCONY BAND," and called the band director at Pine-Richland High School, Dave Supinski, who was familiar with the jazz scene in Pittsburgh.

Supinski rescued the books before the trash was picked up that day and the books were stored in a closet at Pine-Richland. Years later, Supinski's successor, Brian Scott, shared them with Herndon, who was a substitute teacher at Pine-Richland at the time and was Scott's former student-teacher.

"He presented me with all of the sheet music, the whole library of the Balcony Big Band, I was like, 'Where'd you get this?,'" Herndon said. "When I (received the sheet music) that's when I decided I should find a place for this band to play again."

By that time, in 2012, Bennett had moved back to Pittsburgh, and Herndon called to ask for his blessing to resurrect the band. But Bennett, also the band's former drummer, was in failing health after having two liver transplants and the anti-rejection drugs he took were affecting his kidneys.

"I asked if he wanted to play drums but he said he wasn't up to it, so at that point Dave Glover was my first choice," said Herndon, who did not attend SRU while Glover worked there but he was well aware of Glover's reputation in the Pittsburgh jazz community.

Herndon assembled the band and called on former members and freelance musicians in the Pittsburgh area, and, most importantly, he found a place to play: Jergel's Rhythm Grille in Warrendale. Jergel's provided the BBB a paid gig every other Monday night and even a place to store its crates of sheet music.

"We're extremely grateful for Jergel's," said Glover, who speaks to the audience at shows as the band's MC. "It's difficult to support jazz music or any live music in general, and we've been there for almost seven years now. To be going anywhere for that long is an amazing thing and it's getting to the point where we could be playing for a longer sustained period of time at Jergel's than the Balcony Big Band was playing at The Balcony."

Only one founding member of the BBB remains, trumpet player Ralph Guzzi, but the band has always platooned "all-star" musicians, according to Herndon.

"Everyone in the band would consider themselves a freelance musician," Herndon said. "We all love playing big-band music and that's the reason we do it. There are so many people in the band and everyone has a thing that they are good at, so we feature a lot of musicians with solos or featured songs and it has a feel of being an all-star big band with a lot of the best freelance musicians in Pittsburgh."

Herndon said many large cities have at least one big band and there are a few that play in the Pittsburgh area, but the BBB is the most venerable group that plays in the region. Rather than playing Glen Miller and Benny Goodman tunes from the 1930s and '40s that are often associated with the big-band genre, the BBB plays music from the 1960s and later, including selections from composers Bob Mintzer, Thad Jones and Jaco Pastorius.

Most of the compositions and arrangements were acquired by Bennett, who passed away in 2015, and stored in the band's books, but there are some original works arranged by members over the years, including Guzzi and saxophonist Ray DeFade.

Herndon and Glover are not the only members with SRU connections: six of the 18 members are either faculty or alumni. Jason Kush, '04, associate professor of music, plays the saxophone; Brian Stahurski, instructor of music, is the band's bassist; trumpet players include Steve McKnight, '00, Herndon's roommate at SRU, and Dave Wingenbach '11; and there have been numerous SRU professors, alumni and students who sat in for shows over the years. The SRU Jazz Ensemble also occasionally opens for BBB shows at Jergel's.

"The fact that people are from SRU has nothing to do with why they were selected; it's all about who can play and finding the best talent," Herndon said. "But there is something to be said for (the SRU ties) and hopefully it's a feather in the University's cap."

"It's unique and a wonderful thing to have all these people who share a connection with SRU," Glover said. "SRU has an amazing jazz legacy. It's fantastic and (the SRU connection) is one of the reasons why I'm still in the band."

Herndon still marvels at how he went from a starry-eyed freshman making trips to Pittsburgh to see the band every Monday night, to recovering the sheet music and helping resurrect the band.

"You realize you're not going to make a living being the leader of the Balcony Big Band, but I'm very proud to be the leader and it's a band that I still admire," Herndon said.

"Some would say (the music) should have stayed (in the trash)," Glover joked. "We don't listen to those people though."

People have an opportunity to listen to the BBB soon. Their next show is 7 p.m., June 3, at Jergel's, 103 Slade Lane in Warrendale. For more information about the band, including its full schedule, click here.