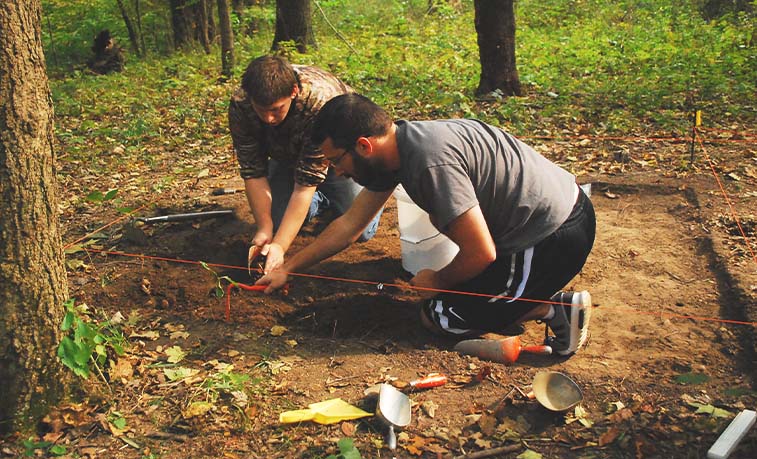 From left, James Jablonski and Nathan Klimas, both 2020 SRU graduates with degrees in interdisciplinary programs, search the soil for prehistoric artifacts at an excavation site near Wolf Creek in Slippery Rock.

SLIPPERY ROCK, Pa. — If you dig a few inches into the dirt along Wolf Creek near Slippery Rock, it won't take you long to find what appears to be a simple rock. However, it could also be a 4,000-year-old artifact indicating the short-term occupations of indigenous people. This may seem far-fetched but it's exactly what a faculty-student research group at Slippery Rock University is finding.

"The difference between a rock and an artifact is really easy to distinguish with a just a little bit of experience in the field," said Aksel Casson, assistant professor of interdisciplinary programs, who teaches anthropology at SRU and is leading an ongoing excavation project. "When a stone has been intentionally broken by a human being, it leaves a lot of signature elements on it. This project provided the first field experience for a lot of our students and they were able to make these distinctions."

Last fall, Casson led excavations near the Miller Woods Nature Preserve in Slippery Rock on the banks of Wolf Creek. The research group included as many as 12 SRU student volunteers, as well as local archeologists who included Stanley Lantz, a retired field and staff archaeologist at Carnegie Museum of Natural History. Casson was aware of the site from Esther Skirboll, a former SRU anthropology professor who published research about the site in the 1980s. 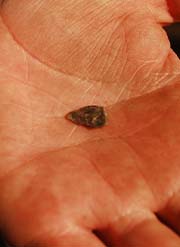 The edge of this tertiary
stone flake indicates that
it could have been cut by
prehistoric humans to help
manufacture tools.

Casson's group took core samples in terrace areas near the creek, using a cylindrical tool about two inches in diameter and reaching two meters deep in the ground to find "cultural material." Cultural material includes charcoal or other evidence of controlled fire pits, as well as white flint, flakes and other debris from the manufacturing and sharpening of stone tools.

"This area is rich in cultural material," Casson said. "What we think we have here are remnants of hunter-gatherer nomads who had a series of short-term occupations. People were building fires and looking for food to harvest along this river bed. They were sharpening their tools for hunting or fishing. This is evidence of people who passed through here thousands of years ago."

Casson estimates the artifacts are from the Last Archaic Period, between 4,000 and 6,000 years ago. Similar artifacts found at Flint Ridge in Glenford, Ohio, were dated to the period.

"Native Americans would have followed this riverbed, where the creek is now," Casson said. "This entire region would have been a high-traffic area."

James Jablonski, a 2020 SRU graduate with a degree in interdisciplinary programs, was one of the lead students working on the site because he had field experience at archaeological field school programs in Maryland and Oklahoma.

"Our excavations were further into the woods from the area (that Skirboll excavated)," Jablonski said. "We started these new 2-by-2-meter squares using different tools like trowels, corers and screens to sift through the dirt. Each day, we'd find new things. We'd find things like nails, wrappers and plastic, which obviously we can date relatively easily."

Students who were new to this type of field experience benefited from working on the project by learning to identify not-so-obvious and much older artifacts.

"There were a few times when I thought I found something and it was nothing, and there were a few times when the opposite was true," said Nicholas Grimm, a junior interdisciplinary programs major from Erie. "It takes some practice. The hardest thing to identify are the stone flakes and whether or not they are made by human hands. You have to look for impact points, and it depends on the sharpness of certain edges and whether or not another edge is flat. Then we can envision a larger stone and an impact that caused a piece to flake off."

The research team conducted weekly excavations from late August through October before the ground froze. Work could not resume in the spring because the coronavirus pandemic forced classes online. Additionally, Casson had an agreement with a radiocarbon lab in Arizona to date the artifacts they found but that too has been delayed because of coronavirus-related closures. Casson and his students were also set to present research at the Society for American Archeology's Annual Meeting in Austin, Texas, in April, but that event was canceled.

However, the research will continue once on-campus classes resume and conditions at the site permit further excavations.

"As we make progress, we're going to attempt to link the Wolf Creek site to the broader picture of regional archaeology, which includes a very well-known archaeology site just outside of Pittsburgh called the Meadowcroft Rockshelter," said Casson, referring to the site near Avella that contains evidence of human existence 19,000 years ago near the Ohio Valley river basin. "The topography at Meadowcroft is similar to Wolf Creek in that we've got this terraced river basin that overlooks a wide and productive forest."

Casson said that, although Skirboll's research indicated human occupation at Wolf Creek 4,000-6,000 year ago, she had hypothesized that there may be an older period of occupation there.

"I'm excited to learn more," said Grimm, who will be among the students returning to the site in the fall. "It's a huge learning experience and I feel like I'm comfortable asking any questions and I get amazing answers from Dr. Casson. I'm eager to do anything extra within the anthropology program and I'm grateful for the opportunities. I feel like I'm offered opportunities here that I wouldn't be offered at other schools."

More information about the anthropology program at SRU is available on the program's webpage.