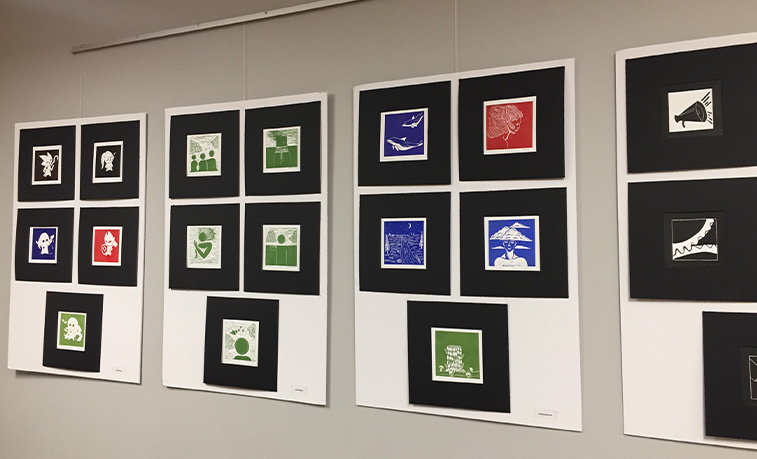 Prints representing personality traits that were made by Slippery Rock University art students are displayed in Bailey Library. The project was part of an Art and Science Series where students in a printmaking class worked with psychology students.

SLIPPERY ROCK, Pa. — When artists and scientists come together, it's easy to see their differences, but when the two fields collaborate at Slippery Rock University, they work together in beautiful symmetry.

As part of an ongoing Art and Science Series conducted by an upper-level Printmaking course, 14 students in the class last fall met with 35 students from a 200-level psychology course, called Personality. The immersive experience was titled the "Art of Personality." The physical outcome of the project, which is displayed in Bailey Library, was more than a dozen sets of 5-by-5-inch prints, each representing the "Big Five" traits based on a psychology theory of personality types.

"My goal is to expose art students to science to broaden their horizons," said Barbara Westman, associate professor of art, who teaches printmaking and came up with the idea for a series. "Any type of science introduces something new, and I think it's very important for my students to realize that there are a lot of opportunities for inspiration that come from different disciplines, so why not science, why not psychology and why not personality?"

There are reciprocal benefits for the psychology students.

"I like the idea of collaboration and giving the students in the psychology class the opportunity to learn about art and the printmaking process to create these visual representations of these abstract characteristics," said Beth Boerger, assistant professor of psychology, who teaches the Personality course. "It's gives them the opportunity to be teachers. They learn by teaching the printmaking students and then get to absorb and practice the printmaking process, all of which provided a much richer understanding of personalities and a respect for printmaking."

The psychology students worked in groups based on the five core personality traits: openness, conscientiousness, extroversion, agreeableness and neuroticism. These traits, according to psychology theory, are each on a continuum of every human's personality. For example, people can be extroverts or introverts but most are relatively moderate.

The printmaking students learned about the Big Five traits from the psychology students and each printmaking student created prints using linoleum blocks with a consistent theme. For example, there could be five prints of different facial expressions representing the traits.

Ducky Concannon, a senior English major from Johnstown, used pages from a dictionary for each trait then created patterns around the wording of the definitions. For conscientiousness, they used a grid to represent order and organization; for extroversion, they used overlapping circles to represent relatability and connectedness; and so on.

Concannon has worked on both sides of these type of multidisciplinary collaborations. They were part of a Writing the Graphic Novel class last spring that worked with printmaking students who made artwork to complement their writing.

"This was fun to learn about something that I don't think I would have had an opportunity to learn otherwise," Concannon said. "It just made me think more deeply about what I'm trying to represent. With abstract art, it's up to the viewer to interpret it, but as an artist you can nudge them far enough in the right direction to as if to say, 'This is what I was going for; do you see it?'"

More information about SRU's art department and psychology department are available on the SRU website.