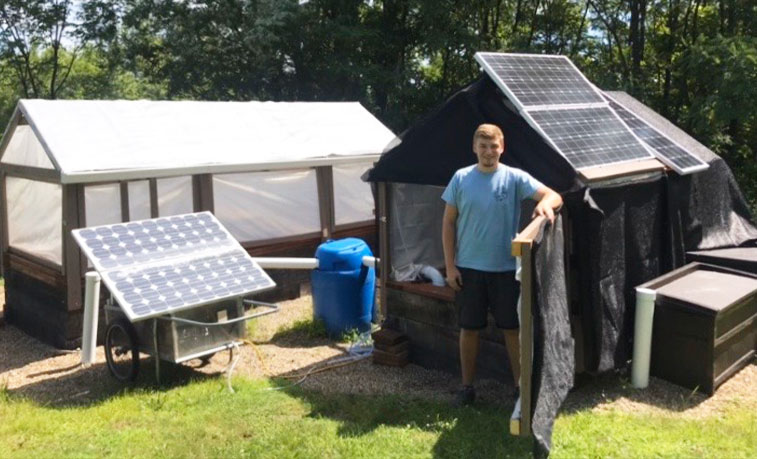 Paul Hedzik, a graduate assistant at Slippery Rock University’s Macoskey Center, is one of two SRU students involved with an aquaponics project to grow plants year-round on campus in a closed-loop system.

SLIPPERY ROCK, Pa. — According to the Old Farmer's Almanac, the four-week period to plant lettuce in Slippery Rock ended May 23. However, a faculty-student research group at Slippery Rock University is planning to grow lettuce and other produce on campus year-round with yields two times faster than traditional agriculture.

The method researchers will be using is called aquaponics, an integrated system that combines raising fish, or aquaculture, and the soilless growing of plants, or hydroponics. Variations of this growing method date back centuries, but only in recent decades has the term "aquaponics" been used as researchers better understand its viability.

Although many aquaponics systems are indoors, within temperature-controlled environments, SRU attempted to develop an outdoor system in 2017. However, the installation at SRU's Macoskey Center for Sustainable Systems Education and Research has understandably encountered setbacks.

"Because we have an outdoor system, we have to reset it every year because of the weather that we contend with," said Shawn Davis, assistant professor of parks, conservation and recreational therapy, who is leading the aquaponics research at SRU. "An outdoor system in Pennsylvania is a little bit tricky, so we have to ask ourselves, 'How can we make it as efficient as possible?' (The weather) gives us an interesting challenge."

There are multiple reasons why SRU's system is outdoors. The first installation, spearheaded by SRU's Sustainable Enterprise Accelerator, was intended to mirror an experimental system at Uganda Martyrs University in Africa for students at UMU and SRU to collaborate on. The UMU system had great success because of Uganda's warm climate. The SRU system is intended to operate in a closed loop, using the same water but without relying on electricity from external sources for heating and pumping the water.

"The pumps run off solar power, but any type of heating unit in the winter needs more electricity," Davis said. "Our goal is to have a separate system that runs on its own year-round."

The aquaponics process is achieved through a symbiotic relationship between fish and plants in separate, adjacent tanks. Fish waste is pumped from one tank to provide an organic food source for plants that sit on containment trays above a second tank. The plants naturally filter clean water back to the fish tank for the fish to prosper.

The plant tank at SRU is 16 feet by 4 feet and 3 feet deep and 8 feet by 5 feet and 2 feet deep for the fish tank, which holds 400 gallons of water and as many as 75 bluegills. Water is pumped through an air lift system using a 200-watt solar panel at three amps per hour. A temporary shelter was built over the tanks last year, which allowed to make an attempt at growing lettuce in the cold, but the crop yield could not match the type of productivity experienced by researchers who had their findings published by the Food and Agriculture Organization of the United Nations in 2014.

The FAO research found that aquaponics plant yields were twice as fast as traditional agriculture and used 90% less water. This is why the method was particularly helpful in Uganda where droughts are common.

"The Macoskey Center is perfectly situated to try this out because we have garden beds right next to an aquaponics system, so we said, 'Let's see if we can get similar results here,'" Davis said. "We found the opposite of the results (we hypothesized). The aquaponics system did far poorer than the traditional agricultural system."

The project encountered setbacks including fluctuating seasonal temperatures and a leaky tank that forced researchers to continually reset the system. With each water replacement, valuable nutrients were lost.

"Once it becomes an established system, there doesn't have to be that much maintenance with it until winter arrives and we have to start fresh," said Josh Magyar, a junior geography major from Irwin, who is a Macoskey Center intern and one of the research assistants.

"We've all learned that western Pennsylvania is not the ideal climate for an outdoor aquaponics system," said Paul Hedzik, a graduate student majoring in environmental education from Freedom, who is a research assistant as well as a graduate assistant at the Macoskey Center. "In the summertime, it runs well off the solar panels, but in the winter, we have much less sunlight to power the pumps, and to keep the fish alive we also have to put a heater in the water."

Despite the problems, researchers are excited to return to the project and make adaptations when access to campus resumes following the easing of safety restrictions due to the coronavirus pandemic.

"It's more fun for me to garden this way because you're always learning and finding ways to yield better results," Magyar said. "Even though it didn't go the way we originally thought, it taught us a lot about the system."

Magyar is so fascinated by aquaponics that he made his own small-scale indoor system with a 10-gallon fish tank with goldfish and minnows to grow microgreens. He has even made systems with setups as simple as a single fish in a Mason jar.

Davis, Hedzik and Magyar worked on the larger-scale system last summer thanks to a $1,600 Student-Faculty Research Grant from SRU's College of Health, Engineering and Science. Part of the grant paid for equipment, including what they hope will be the answer to a problem previously experienced last summer: the weather. This fall there are plans to install a "hoop house," which is a temporary greenhouse structure, that will enclose the existing aquaponics system.

They will add four vermiculture composting beds within the hoop house to generate natural heat, but they will still need additional solar-powered heating sources.

"The compost beds and some heating units within the water supply covered within the hoop house should help keep the fish alive year-round," Davis said. "And the nice thing about those composting units is they will produce worms, and then those worms can be used to feed the fish. That will help close the loop even more and make it more efficient and sustainable."

To learn more about the Macoskey Center, visit the center's webpage.