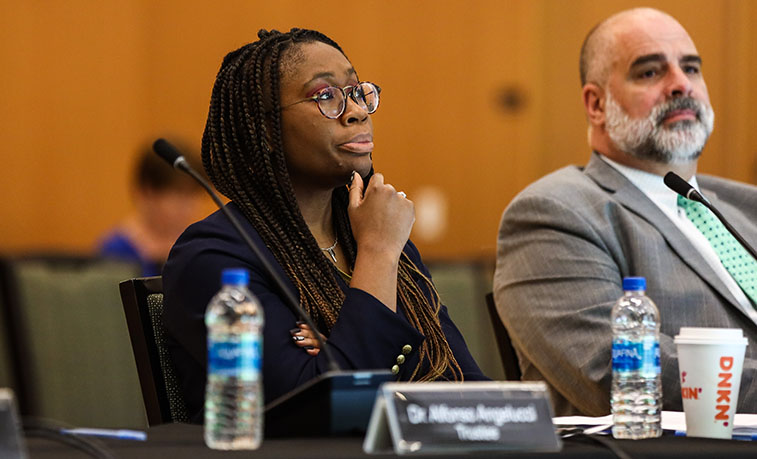 Students will have the same six dining plan options to choose from in 2021-22 as they did in prior years, but three of the plans will be less expensive while another three will have no fee increase. Students who purchase any of the six plans will receive the added benefit of increased flexible spending money added to their accounts, ranging from $50-$350 depending on the plan. The University will announce the pricing structure later this month, along with more details about dining options for 2021-22 after SRU recently contracted with Aramark as its new food service provider.

"This is great because it increases the value for our students and their families," said Christopher Cole, SRU director of auxiliary operations and student services, who oversees the contract with Aramark on behalf of the University. "They are getting more for their dollar and we are pleased to be able make dining more affordable."

The revised naming policy guidelines formally defines the process for assessing and assigning names to SRU facilities and campus spaces, as well as other University entities such as endowment funds, schools and programs. Naming proposals are evaluated by SRU's vice president for University advancement and, if approved, advanced to the President's Office before formally drafted as a resolution for approval and voted on by the trustees.

"Naming policies are valuable to our donors and the University," said Dennis Washington, SRU vice president for University advancement. "They provide opportunities for donors to link their philanthropic interests with enduring recognition for either themselves or others. The naming of such items as facilities, schools or programs must undergo a high level of consideration and due diligence to ensure consistency, uniformity and that the name reflects the University's purpose and mission.

"In rare instances, honorific naming may be appropriate where an individual has provided exemplary, meritorious service to the University. More typically, however, naming opportunities are associated with philanthropic support and they provide quantifiable funding opportunities to present to donors."

The new guidelines recommend that a donor's gift should equal at least $1 million to name a facility or half of the cost of the construction or major renovation and maintenance to an existing facility. However, the policy allows for extenuating circumstances in which there may be exceptions. Other examples include target endowment levels for academic or major University units, which calls for a namesake donation of $5 million for a college, school or division; $3 million for an academic department, $2.5 million for a Universitywide center or institute and $1 million for a college/unit center or institute. These also have leeway for exceptions.

Revisions to the naming policy guidelines will be available on the SRU website's policy webpage once the approved documentation is finalized for public viewing.

Other actions taken by the trustees included a resolution for an order of executive succession that needed to be certified and which outlines the University's new succession plan for the executive management team in the event that the president is temporarily unable to fulfill the responsibilities of the position or in the event there is a vacancy. The succession rank in order after SRU President William Behre is: Abbey Zink, provost and chief academic officer; Amir Mohammadi, senior vice president for administration, global engagement and economic development; Carrie Birckbichler, chief financial and data officer; and Washington.

Also, the trustees approved its slate of officers for 2021-22: Matt Lautman, chair; Elise Michaux, vice-chair; and Samantha Hawk, secretary. Officers are elected to serve one-year terms and shall not serve more than two consecutive terms in their particular office. All three officers served in their roles last year. Hawk, a senior political science major from South Park, has served as the student trustee since May 2020. Finally, the trustees reapproved Lia Paradis, professor of history, as a non-voting liaison to the council for another year. Paradis was appointed to the role last year.

Through its standing committee meetings, the trustees received and conducted the following items that did not call for executive action:

The next quarterly business meeting is scheduled from Sept. 23-24 at the Smith Student Center Theater.