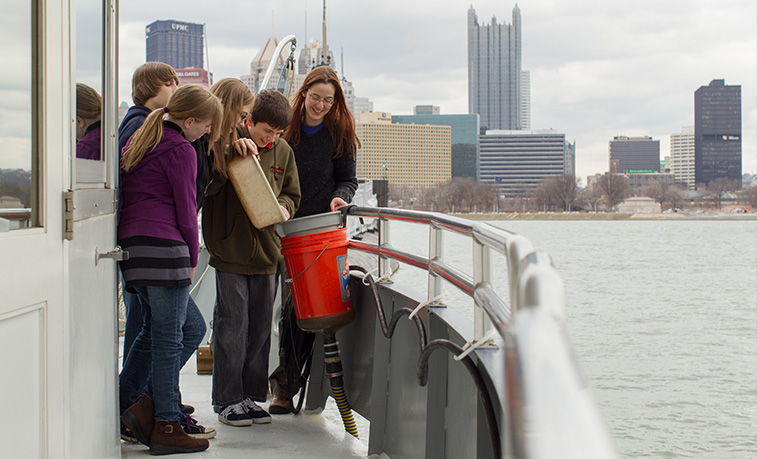 SLIPPERY ROCK, Pa. — During her time as a Slippery Rock University student, Suzi Bloom found that faculty often floated the idea that keeping environmental education tied to local communities would have a greater impact on their residents. Bloom is taking that idea to a whole new level, leading a floating classroom for schoolchildren aboard a riverboat.

"SRU helped give me the direction for how to use my degree," said Bloom, who earned her master's degree in park and resource management in 2006. "One of the things that was always stressed (at SRU) was keeping it local. When you talk to people about their local environment, it tends to have more of an impact than if you talk about some place they might never visit, like a rainforest."

Bloom said that "local focus" mantra is what led her to help launch an environmental education program through Rivers of Steel, a nonprofit organization based in Pittsburgh that supports cultural and economic development in local communities. The organization spans eight counties in southwestern Pennsylvania. Rivers of Steel is one of 55 National Heritage Areas, which are lived-in landscapes designated by the U.S. Congress, where a variety of private and public partnerships fund historic preservation, natural resource conservation, recreation, heritage tourism and educational projects.

In 2016 RiverQuest, along with the Explorer, were acquired by Rivers of Steel. Bloom came aboard the Rivers of Steel staff in 2017 as director of education. That's when she harkened back to what she learned at SRU - keep it local.

While Rivers of Steel continued to support the educational mission of RiverQuest, offering programs to more than 2,300 Pittsburgh-area grade-school students through its flagship program, Environmental Science on the Three Rivers, they needed to reach more students.

Rather than just docking Explorer near the Carnegie Science Center in Pittsburgh, as they had done in the past, a new outreach program called Environmental Science on the Mon, that takes the Explorer to students from communities in the mid-Monongahela Valley, was launched.

After a successful pilot program in October 2018 docking from Monongahela, Explorer will launch in October 2019 from New Eagle, a community near Monongahela about 32 miles south of Pittsburgh by boat and a 45-minute drive by bus, to reach an additional 600 students from schools that did not previously participate in the flagship program.

"If we take the boat to them and do programming in their backyard, they have more time they can spend with us because they don't have the commute to Pittsburgh. It has more of an impact on the learning capabilities of the students because they are learning about their local ecosystem," Bloom said. "We also talk to the kids about how their watershed connects with the Mon river and what are some impacts where the watershed connection can be good or bad for the health of the river."

Anywhere from 60-90 students at a time conduct lab experiments aboard Explorer as "guest scientists" to test the living and nonliving indictors of water quality; learn about the topography of and impact of local watersheds; and conduct other experiments related to river health.

"(The students) are using equipment that I didn't get to use until I was in college," Bloom said. "The kids drive the experiments and we act more as the facilitators and instruct them on how to use the equipment, but they are the ones who are using it and mixing the chemicals. They are going through the scientific method to prove or disprove a hypothesis about the health of the river."

During the three- to four-hour classes, students analyze the water's dissolved oxygen, pH, turbidity, temperature and nitrate levels, which are indicators for the students to determine water health and find animal life. They also drag a net behind the boat to collect microscopic organisms, plankton, algae and macroinvertebrates, which are indicators if a food chain is present in the river. Each student views samples under their own microscope inside the cabin of the ship.

"If an organism that is sensitive to pollution is living in the water, that's a good sign," Bloom said. "It is good for students to get this exposure. We oftentimes have students who are intimidated by the subjects, especially chemistry. They think, 'Oh, well, I'm not a science person and it's not for me,' but when they are doing these lab activities and having fun with it, they'll begin to think, 'Maybe this is something I'm interested in.' This also teaches them there are so many different avenues that you can go into with science, from teaching and research to environmental and regulatory industries."

Bloom worked with historical societies in communities in the mid-Mon Valley to provide students with historical context related to the river, especially communities that were once home to industries that affected the river's health. Funding from the Eden Hall Foundation and EQT Corporation will allow students from school districts in the mid-Mon Valley, like Ringgold and Monessen, to schools in Fayette County, like Frazier and Connellsville, and Carmichaels in Greene County to participate in Environmental Science on the Mon tuition-free.

Rivers of Steel employs approximately 20 part-time seasonal instructors to facilitate the school programs, while Bloom, who teaches on occasion, spends most of her time managing the operation.

"My interest is coming up with different ideas and approaches to the programming," Bloom said. "But I love teaching science to kids because there's always that curiosity and easy ways to make lessons hands-on and fun. Also, being on a boat is a nice job perk."

Rivers of Steel has additional student programming for the arts, history, engineering and social studies, and Bloom is seeking instructors for the 2019-20 school year. For more information about Rivers of Steel, click here. For registration information about the environmental science programs, email education@riversofsteel.com.