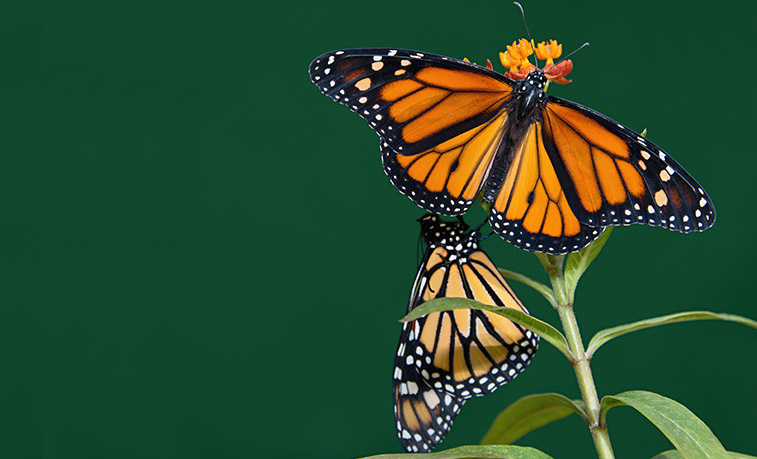 Students enrolled in the Institute for Learning in Retirement can learn about a variety of topics, including a popular class about growing plants to attract Monarch butterflies. The ILR is a nonprofit organization affiliated with Slippery Rock University that offers classes taught by several SRU alumni and retired faculty and staff.

SLIPPERY ROCK, Pa. — Just as learning doesn't stop when someone graduates, those who are passionate about sharing knowledge never stop teaching. That's why the Institute for Learning in Retirement has thrived in Slippery Rock for 18 years. The ILR, a non-profit, member-directed organization dedicated to providing the community with a variety of learning experiences. The ILR is an affiliate of the University and many of its instructors and students are SRU alumni and retired faculty and staff.

There are more than 150 members of the ILR who choose to enroll in as many as 12 classes each semester. The spring 2019 semester included more than 80 class sections, ranging from birdwatching and calligraphy to current event topics such as medical marijuana and human trafficking.

"You'd be surprised at the diversity of topics; we work very hard to provide areas of interest for everybody," said Carol Holland, who retired in 2014 after 21 years as SRU's director of student counseling. Holland currently teaches ILR classes in yoga, minimalism, book discussions and facilitates a kayaking course at Moraine State Park. "Our community is chock-full of people with expertise and backgrounds in various topics. I'm a lifelong learner and I enjoy learning new things every day. I heard about the ILR before I retired and when I retired I got involved right away."

The ILR was founded in 2001 by Connie Smith, the wife of former SRU president G. Warren Smith. Connie Smith, who has a doctoral degree in human development, worked in higher education throughout her career and has a background developing lifelong learning programs.

"A lot of faculty were retiring at the time and we were trying to think of a way to keep them involved," Smith said. "We heard about this idea (through a national organization of lifelong learning institutes) and thought, 'Oh my gosh, that's the perfect thing.'"

The ILR is part of what is now Road Scholar, a national network of more than 400 lifelong learning institutes, that had about 250 such institutes when the ILR launched in 2001. Smith determined the ILR needed about 60 members to operate as a dues-paying membership organization. The first year they had 97 members for 12 classes.

"Then the next semester we had 120," Smith said. "It just grew really fast, which was an indication that there was an unmet need out there."

The Smiths were instrumental in growing the ILR, and still are, as G. Warren Smith continues to teach ILR classes, including a program that takes participants to the opera in Pittsburgh twice per semester.

Explaining why there was such a need, Connie Smith said that retired people start doing all the things they didn't have time to do when they were working, which typically includes tasks like organizing photographs.

"But nobody really wants to do that," Smith joked. "(The ILR) offers them an opportunity to visit places that they've never been or had known about and to learn about things that they were always curious about. It's just a great opportunity for people to learn and make new friends; to them, the appeal is obvious."

"If you're a wacky person who just likes to know things, this is the perfect organization for you," said Tom Call, a Butler resident who retired in 2007, joined the ILR and, in addition to attending classes, serves on the publicity committee. "I didn't know much about snakes or birds, but these classes provide context for existing facts you already know."

Call said having many retired faculty members in the Slippery Rock community is also a benefit.

"Who wouldn't want to learn from people who know what they're talking about?," said Call, a former Maryland resident who worked for the U.S. government in social security services. "They are natural or trained teachers and even though they are retired they still love to share their knowledge."

One of the more popular ILR classes is The Monarch Butterfly Program taught by Gene Wilhelm, SRU professor emeritus of geography, geology and environment. Wilhelm retired in 1983 after teaching environmental science at SRU and continued teaching part-time until 1993. He was one of the first ILR instructors when the program started and students continue to flock to his classes just as the Monarch butterflies are attracted to the flowers planted outside his condominium in Slippery Rock.

Wilhelm teaches students to grow several species of milkweed which attract Monarch butterflies that migrate from Mexico to parts of the northeastern United States and southern Canada each year. Anywhere from 20-40 students attend his classes each semester, which are conducted in the field at places like the Wolf Creek Narrows Natural Area in Slippery Rock, or, like this semester, at Ernst Seed Company in Meadville.

"We're luckier than most parts of the United States because milkweed doesn't come into flower until late summer, almost into fall, and that is timed with the generation (of Monarch butterflies) that arrives," said Wilhelm.

Each generation of Monarch butterflies lays their eggs on milkweed after traveling 150-200 miles northeast before another generation continues the migratory journey.

The lifespan of a Monarch butterfly is about two to six weeks, except for the generation born in late summer, which remarkable stays alive all winter by migrating back to Mexico and starting the migratory cycle again in the spring.

"We're trying to learn the successes and the secrets and teach people how to follow the process of the species by getting them to plant these flowers in their gardens," Wilhelm said. "You need to have very accurate plants for them."

Wilhelm said every milkweed plant helps and despite the Monarch butterfly population decreasing in the northeast, correlating with the eradicating of milkweed, the winter population in Mexico last year was one of the largest in the last 20 years.

"Our word is getting out and more and more people are planting milkweed in their gardens," Wilhelm said. "The Monarch butterfly is a good guy because they are pollinators in terms of flowers of fruit, vegetables, trees and plants, that supply us with food. With ecology, everything is connected and circulating, so you can't take something out and keep the circle going."

Likewise, humans should not remove opportunities to learn; and the ILR is filling a need in the community to keep the knowledge cycle turning.

"The curiosity of learning new things is part of the human species," Wilhelm said. "People might say, 'Well, I'm retired now,' and do nothing, but a lot of people want to continue learning."

Most of the classes are conducted in the Fowler Building in Slippery Rock, with the exception of external programs that travel to museums, parks, businesses and cultural events. Some of the classes are available to non-members. People do not have to be retired to become members.