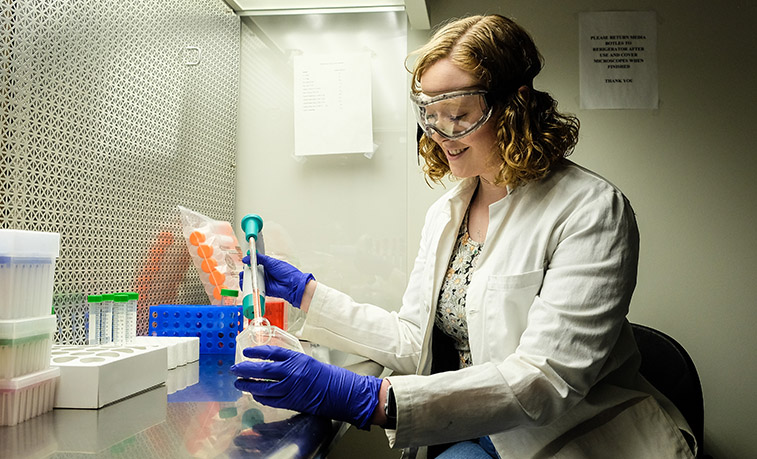 SLIPPERY ROCK, Pa. — Just how eager is Jenell Gerow to conduct research at Slippery Rock University? She offered to help a recently hired faculty member on a project before the professor even arrived at SRU. Gerow, a senior chemistry major from Angola, New York, finally got that opportunity, a year after she initially reached out to Ashley Loe, assistant professor of chemistry, who started at the University in August 2018.

Gerow first contacted Loe in March 2018 when Loe was still an instructor at the University of Kentucky and had just accepted a job at SRU. Gerow joked that Loe is now stuck with her.

"That's what really sets Janell apart from her classmates is her desire to learn," said Loe, who earned a doctoral degree in bioanalytical chemistry from UK in 2016. "(Gerow) is a go-getter and that's what will make her dreams come true."

Gerow came to SRU with plans to become a pharmacist, but by obtaining research experience as an undergraduate and exploring multiple career directions, her dream could go from being the person who distributes drugs to being a researcher who helps pharmaceutical companies design the drugs.

Her first research assignment at SRU is to measure the changes in protein expression in an Alzheimer's disease model. Gerow and Loe received nearly $5,000 through SRU's Summer Collaborative Research Experience grant program to conduct the research. The faculty-student research team is studying ways drugs affect cell proteins, which fold or misalign to form aggregates in Alzheimer's disease patients that causes the irreversible neurological disorder, the most common form of dementia.

Loe said there have been many discoveries related to how Alzheimer's disease advances, but the research community has yet to identify a root cause. A relatively new theory is that the mitochondria, known as the powerhouse of the cell, stops functioning properly, leading to oxidative damage, which is an imbalance of free radicals and antioxidants in the body. The SRU researchers are focusing on proteins found in the mitochondria that contain a metal ion called metalloproteins.

"We are looking into these newly discovered metalloproteins to see if maybe they are one of the first things that go wrong and therefore be a target for Alzheimer's treatment," Loe said. "With Alzheimer's disease, there's a lot of proteins that get damaged over time, and there only a few drugs on the market that help alleviate the symptoms, but they don't cure Alzheimer's or prevent it. There's a lot of work that goes into determining these alternative routes to pinpoint what happens first in an Alzheimer's patient."

Gerow is working 100 hours in the biochemistry lab at SRU this summer testing models using embryonic kidney cells, which Loe said are easier to maintain in the lab while still serving as a model that replicates the environment for Alzheimer's disease. Gerow will run experiments using fluorescence microscopy and other analytical tools to determine levels of various proteins within a cell, and how these proteins change when exposed to current therapeutics. Part of the grant paid for a new fluorescent microscope for the Chemistry Department that is used to measure levels of protein expression, trafficking and assembly in cells.

"A common problem with Alzheimer's disease is that there are many reactive oxygen species in the cells causing damage and by being able to add those aspects we're able to see how the proteins within the cell have changed after treatment," Gerow said.

"We're looking to determine what piece changes in an Alzheimer's patient," Loe said. "We are identifying a target for a drug and then it would be up to another group and their expertise, to design the drug to hit the target and maybe prevent Alzheimer's."

Gerow said this lab experience will provide her with the necessary research, communication, critical-thinking and other transferable skills that will propel her further in her career.

"I'm learning a lot about the biochemistry field and types cell culture techniques that will allow me to get a greater perspective of what I want to do in the future," Gerow said.