SRU alumna puts her own ‘spin’ on new festival 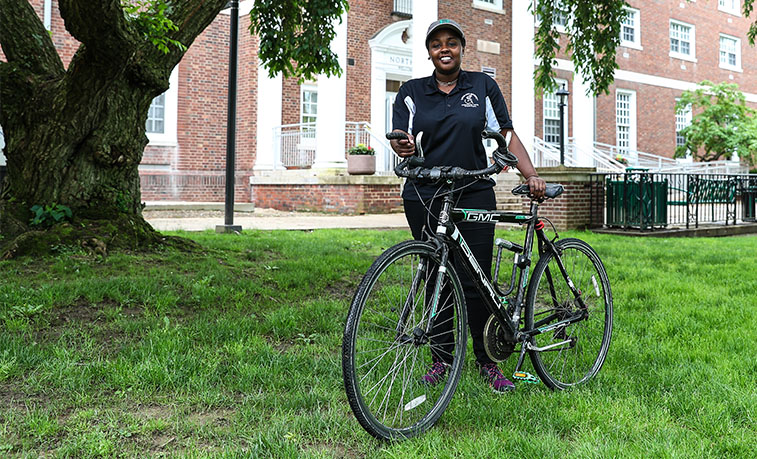 SLIPPERY ROCK, Pa. — Before Sharon Mburu arrived at Slippery Rock University, she never gave bicycles much thought beyond their being a convenient and inexpensive mode of transportation. But now, the 2019 graduate with a master's degree in adapted physical therapy thinks of the bike as a symbol of community involvement, physical activity and inclusivity.

"The APA program really blew my mind, teaching me that people with disabilities can be physically active on bikes," Mburu said. "Regardless of ability, everyone can bike as long as they can adapt."

Mburu hopes to showcase those characteristics, and bikes of all kinds, at the inaugural Slippery Rock Community Bike Festival, 10 a.m. to 2 p.m., June 15 in the parking lot of the North Country Canning Company, 111 Arrowhead Drive, Slippery Rock.

"The festival is all about promoting physical fitness and inclusivity through biking," Mburu said. "I just love bikes and I'm excited about the idea of creating an integrated biking program."

Mburu developed the idea for the festival as an offshoot from her final internship in the APA program. During her three months with SRU's Department of Physical and Health Education, Mburu worked with on creating and implementing a bicycling program for high school and college-aged students with intellectual and developmental disabilities.

"While I was working on this internship and teaching these students, I was researching and learning, too," Mburu said. "My knowledge about biking is still growing, but I love it. It's an easy and fun way to be physically active and anyone can do it."

Mburu hopes the festival will help the Slippery Rock community to not only become more bike-friendly and more active, but also to be more inclusive in terms of abilities and fitness.

To that end, an adapted tandem bicycle station will be available at the festival. A variety of manufacturers produce tandem bikes for use by people with special needs and that adapted tandem activity is something Mburu experienced firsthand when she worked at the Envision Blind Sports Summer Camp last summer. Camp attendees with visual impairments would ride in on the back of the tandem bike while a counselor such as Mburu guided the bike from the front.

The family- and pet-friendly festival will also feature free food and beverages, info booths and bicycle wash and repair stations.

"It's been a seemingly-endless process of planning, but everything is coming together," Mburu said. "It should be a great and informative event for everyone."