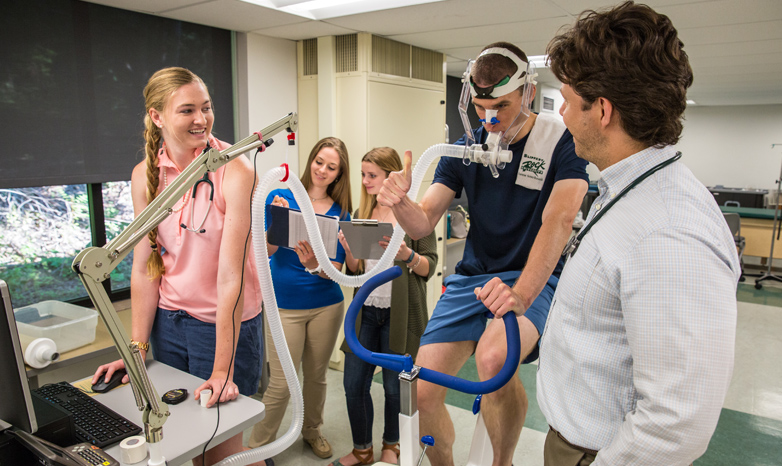 From left, Slippery Rock University graduates Melanie Clark and Maureen Walsh were the lead student researchers for an elaborate blood pressure study, an experience that is propelling them toward doctorate degrees at research institutions in Australia and Colorado.

SLIPPERY ROCK, Pa. - Melanie Clark and Maureen Walsh walked to class together the first morning of their freshman year in 2014 at Slippery Rock University, leaving Watson Hall to discover that they had the same physics class in North Hall. They remained best friends since, sharing similar academic paths and making discoveries that led them to the forefront of research that could change the way the medical profession values blood pressure readings and prescribes exercise.

After conducting an elaborate study of inter-arm systolic blood pressure difference at SRU last year, Clark and Walsh used the experience as the project's lead data collectors to obtain internships at two of the world's leading research institutes and laboratories for their disciplines, Clark at the Murdoch Children's Research Institute in Melbourne, Australia, and Walsh at the University of Northern Colorado's Cancer Rehabilitation Institute. 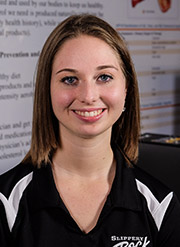 "We evolved in our separate and unique ways but it's kind of cool to watch the journey and come back to SRU for graduation," said Walsh, a Hermitage native who, like Clark, a Pipersville native, received her bachelor's degree in exercise science at SRU's commencement ceremony last month. "But it's not like we're walking across the stage and we're done. We're bringing our experiences to different places."

Clark, Walsh and two SRU faculty members, Michael Holmstrup and Brock Jensen, associate professors of exercise and rehabilitative sciences, are co-authoring manuscripts for three research papers that are currently in the works. The papers are based on their ISBPD study, which explored how a difference in blood pressure readings in a person's left and right arms could be a marker of health risks, such as early detection of cardiovascular disease. Clark and Walsh will also be contributing to research with different populations, including children and cancer patients, related to ISBPD through their internships and post-secondary programs.

Because of their undergraduate research experience at SRU, Clark and Walsh were very prepared and qualified to enter competitive post-baccalaureate programs. Clark bypassed a master's program and enrolled directly into a doctorate program for pediatric medicine at the University of Melbourne, while Walsh was one of four students accepted into a master's program in health and exercise science at Colorado State University, with a fully-funded teaching assistantship and a path to a Ph.D. in human bioenergetics at CSU.

"They've been tremendous," Jensen said. "We worked with them as undergraduates, but they really were at the level of graduate students. (Their experience) really speaks to how SRU is capable of preparing students from our program to go anywhere, not only because of their coursework but also their undergraduate research opportunities. This also helps us as faculty establish relationships with some of the top research institutes across the country and internationally."

The study of ISBPD has quickly emerged in the science community, linking it to the detection of diseases. Jensen said about half of all scholarly papers written on the subject were published within the last couple years. However, SRU is the only institution that has used exercise as part of its study of ISBPD, particularly how an acute bout of aerobic exercise elicits a difference in inter-arm blood pressure.

Jonathan Mynard, the senior research officer at Murdoch Children's Research Institute, came across the SRU research group's paper on ResearchGate, an online platform where scientists share their publications. Intrigued, Mynard reached out to Holmstrup and arranged a meeting at SRU while he was speaking at a conference in Pittsburgh.

"Through our meeting he realized there could be some room for collaboration," Jensen said of Mynard, who leads the cardiovascular bioengineering team within the heart research group at MCRI. "Melanie sought him out for an internship and he was very interested in working with her."

Clark spent four months in Australia, working in the clinic to analyze ISBPD in children, pre- and post-exercise, while also learning bioengineering by creating computer models of the vascular system to simulate ISBPD.

"Essentially we were making educated adjustments to try to induce ISBPD in a model system," Clark said. "That way, we can better figure out the mechanisms behind what is causing it. There have been studies trying to understand the occurrence of ISBPD but nobody knows what is causing it. If we can answer that question, we could maybe link it with diseases and get a better understanding of human physiology from it."

While Clark was working with children and computer modeling in Australia, Walsh was on the other side of the world, in Northern Colorado, exploring ISBPD in cancer survivors and using exercise prescription to mitigate the side effects of cancer and cancer treatment.

"There are all these treatments that are helping with the cancer but also harming other aspects of the body," Walsh said. "We're exercising cancer survivors after they literally just had treatment, coming straight from the hospital to our clinic."

Clark and Walsh talked nearly every day despite being in separate hemispheres.

"We want success for each other; it's never been a competition," Clark said. "It's just been about supporting each other to achieve our dreams."

"I appreciate her as a researcher and as a friend," Walsh said. "Research can get challenging and (it's nice) when there is someone you have camaraderie with and they are supportive. You learn a lot along the way."

Clark and Walsh's names will show up alongside one another in scientific journals from last year's ISBPD study at SRU, with more studies, manuscripts and conference presentations to follow. The study, based on data collected from 60 participants who performed short bouts of exercise, measured people's blood pressure at rest and during exercise to detect ISBPD, defined as a difference of 10 millimeters of mercury in blood pressure readings between the left and right arms.

In summary, the SRU research team found that exercise increased the likelihood of ISBPD for people who did not show a difference at rest. Also, during recovery, the difference was smaller than before exercise, meaning that response could possibly be elicited with chronic exercise.

"It's interesting because (these findings) suggest that exercise is not only a diagnostic and prognostic tool, but exercise could be used as a primary intervention to decrease your risk for cardiovascular diseases by screening with ISBPD," said Jensen, who cautioned that this conclusion is preliminary and further research is needed to support it. "Seeing that exercise can decrease that difference would be valuable."

What has already proved to be valuable to the pair was their undergraduate research experience at SRU. They also set an example and paved the way for more SRU students to explore ISBPD.

"Now it's time to let other students develop and shine and get the opportunity that we've been given," Clark said. "Our names will be on all this research and we've moved on from the University, but we tell the students we trained that the purpose of research is not to see your name on a presentation, it's to try to serve the community and help people."

Another discovery for Clark and Walsh, once aspiring physical therapists, was finding their calling as researchers. When they walked to their first class together nearly five years ago, they weren't sure what they wanted to do with their careers. Now, they are pursuing doctorate degrees, one Down Under in Australia and another a Mile High in Colorado.

"Sometimes with research you think this is how it might be, then sometimes it takes a turn," Walsh said. "It's like your journey through your undergraduate career and growing up."