Marathon Man: SRU alum running his way around the world 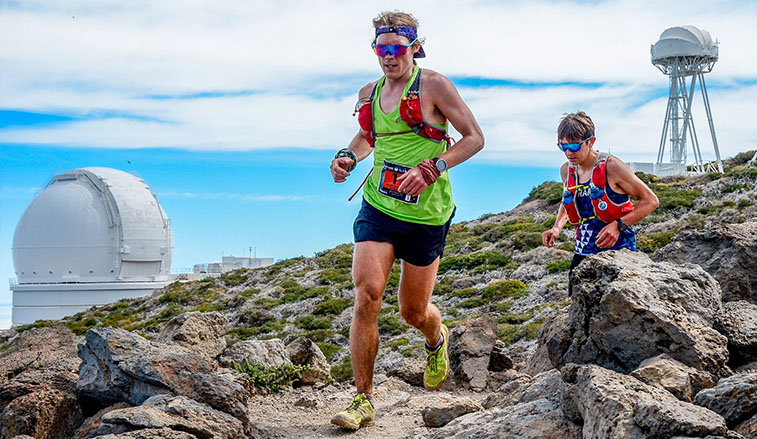 Morgan Elliott, a Slippery Rock University alumnus, ran in the Transvulcania Ultramarathon in La Palma, Spain, May 12, where he placed ninth. The race was one of many included in the Migu Skyrunning World Series that Elliott was invited to compete in after back-to-back victories on the national level.

SLIPPERY ROCK, Pa. - After his record-breaking 2014 senior year at Slippery Rock University, Morgan Elliott set his sights on the clouds - literally. Elliott, who set a record in the 1,500-meter dash and was part of an SRU relay team that established a new standard for the 4x800-meter, is competing in this summer's Migu Skyrunning World Series, traveling around the globe to run on trails miles above sea level.

Skyrunning is a trademark style of racing involving vertical climbing and running on "sky-high" trails across mountain ranges, over ridgelines and around volcanoes. The International Skyrunning Federation hosts four different race series annually, each featuring multiple races and lasting months at a time.

While the jump from the track to a mountain range may seem rather lofty, it's not Elliott's first extreme change of pace. Shortly after graduating from SRU, he found himself involved in ultramarathons, better known as 50K races. For the uninitiated, that's 31 miles.

"I wanted to pick something hard so I could make everything else I do feel easy," Elliott said of the transition to extreme long distance running. "I wanted a challenge."

And while his wish was granted, it just wasn't in the way he thought it would be, unknowingly competing in, and winning, a race - the 2015 Quest for the Crest Vertical 50K in Burnsville, North Carolina - that was included in the U.S. national skyrunning series.

"At that point, I didn't even know what skyrunning was," said Elliott. "I was simply searching the web for a 50K race to take part in and picked that one because it sounded cool."

In fact, Elliott's win saw him defeat the two men - Cody Lind and Josh Arthur - who would later earn the gold and the silver at the conclusion of the series. Once he learned more about skyrunning, he was, well, off and running, capturing U.S.-based first place wins two years in a row (2015 and 2016). Those successes resulted in Elliott's invitation to compete around the world via the 2018 Migu Run World Series.

Elliott traveled to Europe to compete in his first race of the series, the Transvulcania Ultramarathon in La Palma, Spain on May 12, where he placed ninth. While he'll be racing in at least four other events throughout the series, with a fifth one also a possibility, his next race will be the Livigno SkyMarathon in Livigno, Italy June 16. He is currently living and training in Portugal.

For the average person, training for these types of races isn't easy, but Elliott already had a knack for vertical climbing and "technically difficult" trails, honing his skills in basic and technical trail running at McConnells Mill State Park in Portersville while studying parks and recreation management at SRU. As a member of the cross-country team, he also spent a lot of his time running around town, up and down the hilly terrain surrounding Slippery Rock.

"I like to run to viewpoints, which involves a lot of uphill work and vertical discipline," said Elliott who has also dabbled with uphill skiing while living in Colorado. That sport involves traversing uphill and across ridges and mountainous terrain - essentially skyrunning on skis.

But the biggest tests for Elliott weren't the technical aspects of skyracing or learning to adapt to a vastly different living situation - evidenced by the fact that he lived out of his car as he traveled the country after graduation. Rather, the most difficult part of adjusting to racing in Europe was the language barrier separating himself from those around him.

"I have to be ready to go with the flow, to be adaptable and go along with whatever happens," Elliott said with a smile.

After the Migu Run series concludes in October, Elliott has a few choices to make.

While he's been invited to continue racing internationally in Scotland, he also has his eye on Stateside competition by qualifying for the U.S. Mountain/Ultra/Trail Team, which falls under the jurisdiction of USA Track & Field. The qualifying race for the MUT, the Moab Trail Marathon Championship, is set for Nov. 3 in Moab, Utah.

But that wasn't always the case.

Afraid he wasn't ready to compete at the international level when the opportunity first presented itself, Elliott considered taking a year off for additional training before committing to the World Series. However, after some deep thought, he decided that it was better to take the plunge.

"You'll never be completely ready," he said. "You just have to go for it. It's hard, sure, but I'm not regretting anything."

Elliott said that his post-SRU success has had a lot to do with the coaches and training strategies he learned at the Univeristy.

"I look at SRU and cross country and how intensely I part took the sport, and I don't think I appreciated it then as much as I should have," Elliott said. "Now, after almost four years, I'm seeing the process of training, and it's really beautiful. I enjoy the journey so much more now. I appreciated how my coaches would push me in striving for new goals and push me to new limits."