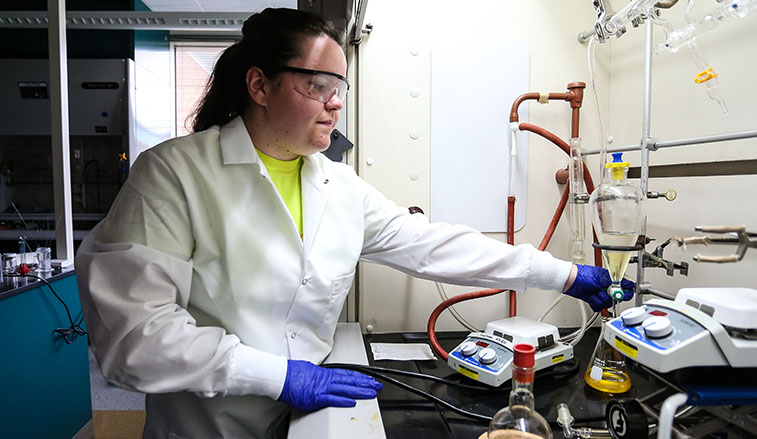 Shannon Rose, a Slippery Rock University junior chemistry major, extracts a reagent from a compound in SRU’s organic chemistry lab as part of her amino acids research this summer.

SLIPPERY ROCK, Pa. - There are building blocks that scientists try to avoid, like protein chains that fold in the human brain and lead to neuro-degenerative diseases such as Alzheimer's disease. There are also building blocks that are beneficial, such as taking one research study and building upon it to discover better outcomes.

Thanks to a Slippery Rock University Summer Undergraduate Research Experience grant, Shannon Rose, a junior chemistry major from King of Prussia, will be doing just that. She'll be spending her summer working in the organic chemistry studying amino acids. Under the direction of George Lengyel, associate professor of chemistry, Rose will be picking up where last year's SURE grant recipient left off, with research titled "Synthesis and Hydrolysis of Complex Dialkylated Amino Acids."

"We have a method in place; it's just not ideal," Lengyel said. "We're refining the method."

Last year, McKayla Miller, a senior chemistry major from North Ridgeville, Ohio, tested ways to isolate amino acids, described as building blocks of the body, so they are able to disrupt the forming of amyloids, which are protein aggregates tied to Alzheimer's disease.

"Our goal is to make unnatural amino acids so that someone could put them into the proteins, but first we have to find an easy way to get to them," Lengyel said. "The challenge is to get a reagent, in addition to water, that would facilitate the breakdown to isolate the amino acids."

The previous method required too much water, making the isolation much more difficult. That's where Rose comes in. She is tasked with finding a reagent - a substance or mixture for use in chemical analysis - that requires less water to isolate these amino acids.

Although the researchers are not testing cells or cultures, by synthesizing a molecule they are developing methods that could lead to advancements in medical sciences.

To achieve the desired chemical breakdown with water, Ross is attempting to make a rarely used reagent called phenyl diamine tetraacetic acid, or PDTA, which is not commercially available.

"We're finding techniques and we're getting data that have never been published before," Lengyel said. "Shannon has been working hard this past semester, but it's really challenging to get a lot of work done while you are you taking classes and writing lab reports. The summer is a really good opportunity when you can just focus on the research."

"I was excited (to receive the grant) so I can keep working on making PDTA over the summer," Rose said. "As a student it's important because it gives me the opportunity to work longer and more in-depth with professors like Dr. Lengyel and I can get a better handle on things that I'll be doing the rest of my life."

Rose, who is minoring in criminology, would like to work in a crime lab someday, such as a toxicology unit or in a medical examiner's office. Next year she'll be applying for internships and having research experience will help advance her career.

Lengyel and Miller will be presenting their research from last summer at the American Chemical Society's conference in Boston Aug. 19-23. Rose could potentially present her findings next summer.

"This sets our students up so that in the future they have more to show (to job and graduate school recruiters)," Lengyel said. "This research takes the experience beyond what you get in a normal class."