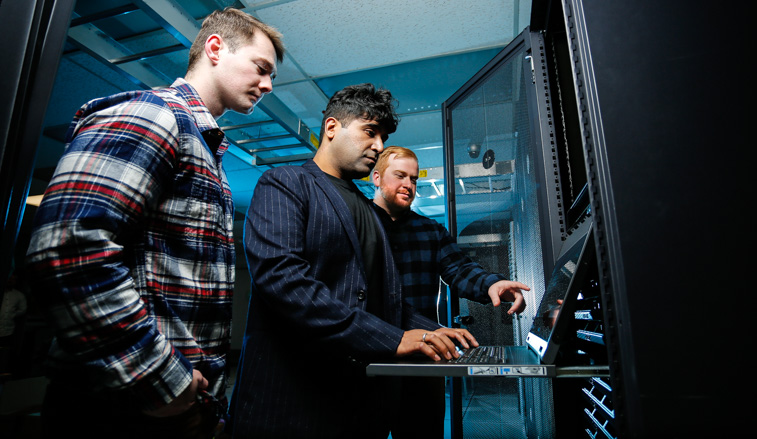 SLIPPERY ROCK, Pa. - For one Slippery Rock University student, the summer hasn't brought a stop to his learning. If anything, the traditional educational "offseason" has accelerated his enlightenment. By how much? Well, he may need a supercomputer to count the ways.

"There are a ton of different skills that I'm developing," said Alex Gessinger, a senior computing major from Murrysville. "There are too many to just start naming them all."

Gessinger also is working remotely on a separate research project titled "Application-Specific Benchmarking for Big Data Analytics," which is funded by SRU's Summer Undergraduate Research Experience grant. That project, which pays Gessinger for 100 hours of research from May 17-Aug. 1, involves assessing the performance of HPCs, running queries and analyzing data structures so that applications, such as software programs that rely on supercomputers, can run more efficiently.

"Alex is very focused," said Nitin Sukhija, SRU assistant professor of computer science and principal investigator for the SRU research project. "When I came to SRU he was my teaching assistant and he seemed very sharp, so I asked if he wanted to get into this research. I've seen him grow and I can trust Alex with a lot of code and systems, which is a big responsibility."

Gessinger is one of two students with access to SRU's first HPC cluster, called the Lava Cluster, which the University acquired last year through a collaboration with XSEDE, a virtual organization funded by the NSF that integrates and shares digital infrastructures with national researchers and educators. The other student, Zach Miller, a graduate student majoring in computing from Beaver, received a SURE grant last year and is one of the co-investigators with Gessinger on the SRU study.

The objective of SRU's benchmarking study is to design and develop methodology for efficiently evaluating big data systems so that they are optimized for new applications.

"Rather than focusing on systems, we're focusing on applications," Sukhija said. "Most research is done on these big data systems, but then you have applications that will not behave the way you want because the queries are not properly partitioned; (therefore) you will not get the performance of the big system."

For example, even though an HPC cluster like SRU's is capable of processing 9.8 trillion floating point operations, or teraflops, per second, the time it takes for a researcher to run a query of data still might take 10 minutes rather than 10 seconds because the application being used is not designed to work as efficiently with the system.

The SRU researchers have already submitted a paper that will be published in the Association for Computing Machinery's International Conference Proceeding in July, and with the help of Gessinger's research this summer, there will be future opportunities for the SRU group to publish and present additional findings.

Meanwhile, Gessinger's experiences this summer, at ORNL and through the SURE grant, will not only benefit his development as a student but will allow him to share the knowledge with students and faculty needing to conduct research using SRU's HPC. Because of SRU's partnership with XSEDE, Gessinger has remote access to several supercomputers across the nation, including the National Center for Supercomputing Applications at the University of Illinois and the San Diego Supercomputing Center at the University of California, San Diego. Gessinger can run tools on these supercomputers that are built similarly to SRU's HPC.

"This is a great experience learning first-hand the entire research process and working with supercomputers," Gessinger said. "I'm developing skills that will be extremely useful in a high-performance computing career and could eventually lead me to a national lab staffing position."