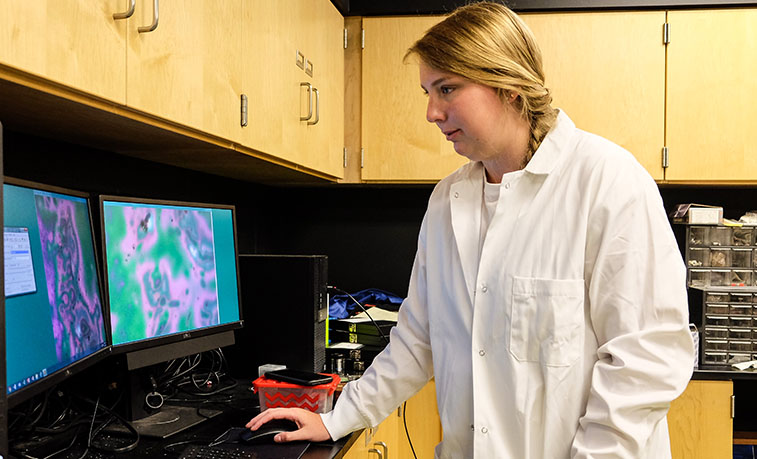 SLIPPERY ROCK, Pa. — A faculty-student research team at Slippery Rock University is seeking a better way to soak up the sun this summer. But they're not looking for a spot at the beach. Instead, they're in the lab analyzing new ways to absorb light that will be converted to solar energy.

Archana Kumari, instructor of physics, and her student, Eva Beeching, a junior physics major from Slippery Rock, received a combined $6,500 from the University's faculty-student research grant and from the Physics Department to fund their research titled, "Optimization of Polymer Nanopillar Dimensions for Maximum Light Absorption."

Nanopillars are tiny structures, one billionth of a meter in diameter, that absorb light better than film surfaces because they are smaller than a wavelength of light.

"Because they are so small, more light gets trapped in them," Beeching said. "If you have a flat surface, the light just bounces off of it, but with the nanopillars the light is not going to be immediately reflected. You get more light absorption and that leads to more current generated and a more efficient solar cell."

These nanopillars are made from polymers, which are repeatable chains of molecules that make up plastic, but because they have a carbon bond they are considered organic. Inorganic solar cells are commonly made of silicon semiconductors that have been used in solar panels for decades. They are still more efficient than organic solar cells but they require more materials, must be installed in thick, rigid sheets, and they cost more to produce.

"These large solar panels use an anti-reflection coating, but we're looking to replace it with nanostructures to save on the cost of the materials," Kumari said. "It is already cost-effective, but we just need to find a way to increase the efficiency as much as possible. Researchers have already proved that nanostructure absorbed more light (than film surfaces), but we can still find more efficient ways by synthesizing nanostructures of different polymers that have not been studied until now."

"There are a lot of different ways you can boost the efficiency of solar cells with the nanopillars," Beeching said. "In the past five years, (the research community) has come a long way and it's going to go further."

Beeching is hoping to be a part of that forward progress. She joined Kumari on the research project in October 2018 and already presented with Kumari at national conferences, including the 2019 American Physical Society March Meeting in Boston.

Beeching was selected by Kumari for the project because of her background completing a research experience for undergraduates at West Virginia University last summer. She worked in WVU's quantum optics lab studying quantum dots, another type of nanostructure where she and other researchers manipulated electrons with lasers.

"It's important to get experience doing research when you're an undergrad, not only to learn more but because it looks good on your resume," said Beeching, who would like to pursue a doctoral degree after she graduates from SRU.

"I've always wanted to do something with renewable energy or environmental engineering and I've always cared about things like climate change, so this could be my small way to contribute something and prevent people's reliance on fossil fuels, even if it's a paper that says, 'Hey, this stuff works,'" said Beeching.