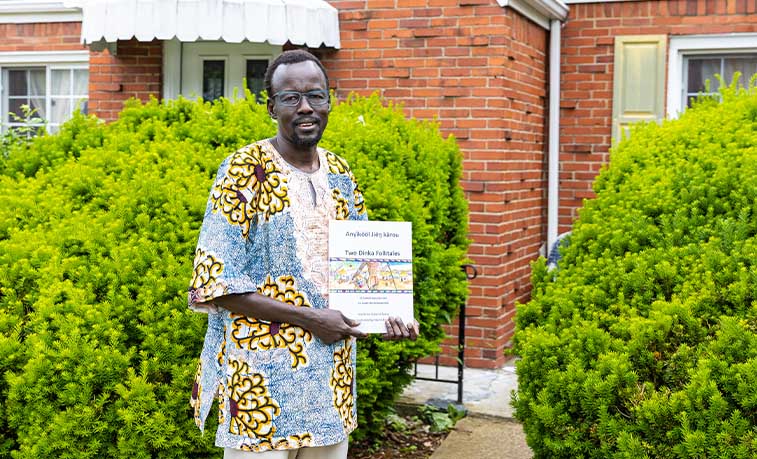 Gabriel Ajang, a 2007 Slippery Rock University graduate, stands outside his home in Pittsburgh with a children’s book he recently authored. As an orphaned refugee, Ajang escaped civil war in his native country as one of the surviving “Lost Boys” of Sudan.

SLIPPERY ROCK, Pa. — More than 20,000 children living in southern Sudan lost their families, their homes and nearly all hope in 1987 because of a brutal civil war. Known as the "Lost Boys of Sudan," these children escaped death or induction into the northern army by walking more than a thousand miles to various refugee camps during the years that followed. They encountered more political and ethnic violence in neighboring Ethiopia. And if gunfire and deadly diseases such as malaria weren't enough, some of the children drowned while crossing rivers or were killed by crocodiles or lions.

Half of the Lost Boys died. Gabriel Ajang was among the survivors.

After living in a refugee camp in Kenya for almost a decade, Ajang and nearly 4,000 fellow Lost Boys came to the U.S. In America, he found peace, freedom and opportunity through education, earning a degree from Slippery Rock University in 2007. The night before his graduation ceremony, Ajang stood in front of a mirror in his dorm room wearing his cap and gown.

"I just cried ... and then after that I laughed," said Ajang, from his living room that has a framed photo on the wall from that ceremony 15 years ago. "It was not crying because I was sad, but because of how I got this point. Looking at how my life started, and how I got from the point of having nothing to living in this house. Really? I'm owning a home."

Ajang, 43, lives in a small brick house on a cul-de-sac in the south hills of Pittsburgh with his wife, Yar, and four children, ages 3-12. He works as an administrative officer in health services for the Department of Veterans Affairs. It's a life that is a far cry from the one lived by a then 10-year-old orphan who was fending for himself in the wilderness of Africa. Ajang's parents and five of his seven siblings died during the conflict in Sudan. He considers himself lucky to be alive.

"When you start living by yourself at that age and being responsible when you're young, you learn how to live from having nothing, to having little, and then a little more," Ajang said. "My life has allowed me to appreciate anything I get."

This is because he knew many children just like him who didn't make it.

"Many of us that we lost along the way, they would have been people like us with families," Ajang said. "Some of them, they never made it to this point. But some of us haveand not because of what we did."

June is National Immigrant Heritage Month and June 20 was World Refugee Day, but there's another day in June that is special for Ajang, the anniversary of the day he landed in Pittsburgh: June 6, 2001. The U.S. government and the United Nations, through the International Rescue Committee, helped hundreds of Lost Boys find places to live with the help of charities in several cities. Catholic Charities placed Ajang in Pittsburgh, where he settled in the Baldwin-Whitehall community and worked bussing tables at the Hilton Hotel downtown while earning his GED.

"Many people ask me, 'What were you expecting to be if you (had not made it to America)?,'" Ajang said. "What I remember about my (previous) life was living on the farm. That was the goal when you grew up (in South Sudan), you wanted to be a farmer and have a big farm."

Ajang found that in America, higher education was the key to success. He took part-time classes at the Community College of Allegheny County before transferring to SRU, where he earned a degree in health science-community health.

"I really like (SRU); it was a good school for me," Ajang said. "They had small class sizes and you had an opportunity to know your classmates and teachers. And being far away from the city with a nice campus, I really liked that. It was a good fit for me."

After graduating, he returned to Sudan and was reunited with his brother, Mading, who was living in Uganda. Ajang stayed in Sudan for 11 months and married Yar, but she was not able to immigrate with him back to Pittsburgh until 2012. He's gone back to South Sudan, which became a sovereign country in 2011, three times since he first immigrated to the U.S.

Ajang and his wife are not alone as immigrants in his neighborhood. Allegheny County, and especially the Baldwin-Whitehall communities, have a large population of refugees and immigrants. Recent census data show that between 8%-13% of residents in those two communities speak a language other than English in their homes. 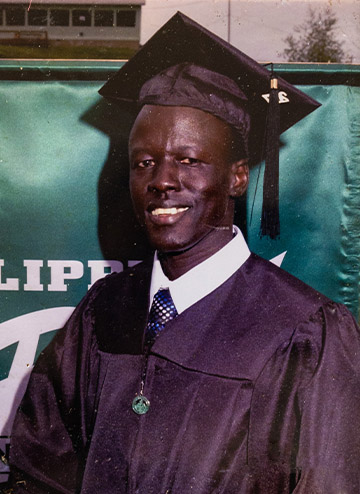 Renee Christman, who teaches English as a second language at the Paynter Elementary School, co-founded a project in 2013 called "Saving Stories." She came up with the idea to have refugees and immigrants from the Baldwin-Whitehall communities share fairy tales and folktales from their homelands. As part of the series, she asked Ajang to contribute.

"I cannot call myself a writer," Ajang said. "But (Christman) reached out to me from my daughter's class and asked if I would be interested (in sharing stories). In the tribal community, there's no formal education. The "formal" education is storytelling when the grown-ups tell their children stories. So, I decided to start writing some of these stories down."

In December 2018, the children's book "Two Dinka Folktales" was published as part of the Saving Stories series. The stories, written in Ajang's native Dinka language and in English, are about a hyena and his friends, the hippo and the lion; the other is about a fox and a dog. Both stories have moral lessons of patience, kindness and being close to one another.

"That's how we used to learn in the tribal community," said Ajang, who first heard the two Dinka folktales from his grandmother. "This animal did this, or this person did that, in a figurative form. It is important to keep those stories, and to do that, I must write them so that my kids can learn about it when they read it."

And it's not just his children, but others, no matter their heritage. Ajang was invited into classrooms in the Baldwin-Whitehall School District to read these stories to children, as well as share his background as a Lost Boy of Sudan.

"I like to contribute to whatever people need," Ajang said. "It's not because I want to be famous or anything. I want to tell children that this is what can happen to people. Life is not fair. Sometimes it can be good, but (when bad) things happen, don't lose hope."

Two civil wars have ravaged Sudan, the first from 1955-72 and the second from 1983-2005, the latter resulting in South Sudan's independence.

Ajang, who grew up in the Twic East County of Jonglei State in South Sudan, expressed frustration and ended his assessment of the situation in his homeland by saying he's not a politician.

But he's happy to be living in the U.S. and raising his family in western Pennsylvania.

"The opportunity in this country, you can't get it anywhere else," Ajang said. "There are children in South Sudan, smart children, but there's no school for them or their parents can't afford to send them to school. That opportunity is here if you want to go to school or work, and you can make a living."

Ajang's life is an example of the opportunity and the path to success through education, but his path was literally walked - hundreds of miles - through unimaginable dangers and suffering.

"People suffered," he said. "But out of that suffering, still good things would come out of it. That's how I look at my life."

"Two Dinka Folktales" is available on Amazon. Learn more about "Saving Stories" on the project's website.