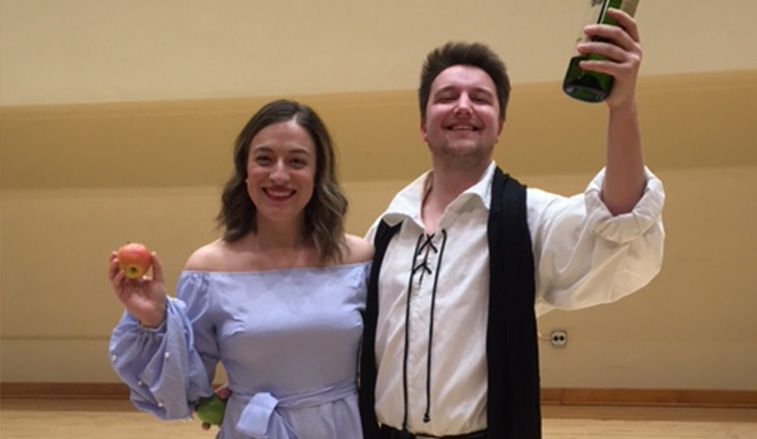 SLIPPERY ROCK, Pa. - A pair of accomplished Slippery Rock University music majors will soon be singing a different tune when the duo - Chase Upchurch and Marie Helstrom - travel to Italy after being accepted into the esteemed Accademia Vocale Lorenzo Malfatti program.

The AVLM program, is a four-week course that accepts only 18 vocal performers from around the world every summer to study voice, Italian language, acting, style and diction. Upchurch and Helstrom will receive instruction from a team of distinguished faculty who have performed with the Wolf Trap Opera, the San Francisco Opera and the Seattle Opera among others. The program's namesake, Lorenzo Malfatti (1923-2007), was a baritone opera singer and music professor from Pittsburgh.

Malfatti, who taught voice, diction and opera at Chatham College, was also a voice coach for the Lyric Opera of Chicago. He later joined the faculty of the University of Cincinnati's College-Conservatory of Music. He was an alumnus of the Juilliard School, the Cherubini Conservatory in Florence, Italy and the St. Cecilia Conservatory and Academy in Rome, Italy.

Upchurch, a senior music education and music therapy dual major from Titusville, was recently awarded the Beth Landis Music Education international scholarship through SRU's chapter of the honor music fraternity Mu Phi Epsilon; while Helstrom, a senior music therapy and music education dual major from Langhorne, was accepted to a prestigious music therapy internship in Honolulu, Hawaii at Sounding Joy Music Therapy, which accepts only one intern a year. Both students have a focus in vocal performance and have participated in numerous vocal and instrumental performances both on and off-campus.

"The goal of the (Malfatti) program is to learn more about Italian opera and increase our own abilities as vocalists in the most authentic setting: Italy," Upchurch said. "Of course, there are other goals such as making connections and experiencing a new culture."

After winning SRU's Chad Williamson Voice Competition in November, Upchurch started thinking about graduate school and the competition with students from other universities. His thoughts turned to needing further training, connections and event experience to help set him apart, so he began discussing his next steps with Christopher Scott, an SRU professor of music. Scott had participated in the AVLM when he was an undergraduate student and in 2017, he returned to the program to teach a masterclass.

"I plan on using the information and connections from AVLM to get into graduate school and pursue a doctoral degree so that I can teach at the university level," Upchurch said. "I also plan on doing some soul-searching while in Italy to inspire my musicianship, compositions and relationships."

Helstrom and Upchurch both auditioned for the program, in part, by preparing and submitting video recordings of two pieces of Italian musical literature.

"(Preparing the video) was the hardest part of the audition process," Upchurch said. "You may be the best singer in the world, but those listening only get to hear three minutes from you, and it may not be your best. On the other hand, you could be just okay, but have a great audition. It's one of (the music department's] goals to train consistency so that we are always working at our best."

The pair were sent a number of pieces to learn before they begin attending classes at Boccherini Conservatory in Tuscany, where they will continue to learn other skills and musical literature during their June 24-July 27 stay. Upchurch said that the first night of the program will feature a master class and a sing-through of some of the pieces the participants were sent. Given only a month to learn the required literature, Upchurch said the task was a challenge given his usual learning curve of around six weeks for a new piece.

"Anytime I go on a run, or in the car, I'm listening to those pieces. I'm listening exclusively to what they provided so I get it nailed down. It's getting quite annoying," Upchurch said with a laugh. "I need to get some Drake back in my life."

Helstrom said she's excited to learn how to produce "an authentic Italian performance," including using correct Italian diction, having knowledge of the characters, the settings and the historical implications of the pieces, and learning the background details that only a true cultural experience could provide.

"I'm also looking forward to, and a bit nervous for, singing my Italian pieces for Italian audiences in various venues in country," Helstrom said. "That will be the true test."

Aside from masterclasses, vocal training and performances, students in the program will be able to explore the city of Lucca and travel to other nearby locales including Nice and Geneva.

Upchurch said he's looking forward to traveling and having new experiences, while eager to leave the hustle of home behind in order to "relax, learn and do what I love doing." In addition to being a dual major at SRU, Upchurch is the choir director and pianist for Nixon Methodist Church in Butler; an assistant marching band director at Leechburg High School; and a private teacher at Sing Sing Sing USA in Gibsonia.

"I'm excited to travel to a place where no one knows who I am," Upchurch said. "We work so hard in our lives and on social media to be someone, and sometimes it's a lot of pressure and it distracts from the simplicity of life. Over there, no one will know who I am or care about my resume or titles, and I'm hoping that I'll be able to catch a sunset on the top of the walls of Lucca with all of those expectations and pressures lifted for a moment."